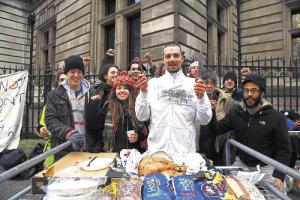 A new wave of affection﻿

A network of direct actionists comes out of Occupy

We will never cause harm, loss or damage to society or any community, any individual as they stand in an ethical capacity or the environment.

All ‘active’ splinter groups are autonomous and are not always directly linked to the centralised organisation, however all Love Activists groups… 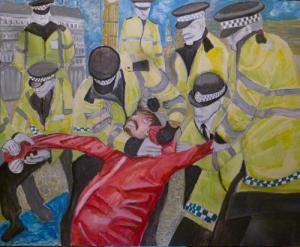 Around 150 Occupy protesters held the area outside the supreme court near Parliament Square, London, over the weekend of 21-23 November. In mid-October, Occupy Democracy were a presence in the square for nine days, during which police arrested 40 people. Both events saw lectures, discussions and readings. Next event 20-21 December.

On 12 July, Occupy LA organised a ‘chalk walk’ in Los Angeles, California, in support of 12 fellow-demonstrators who had been charged with vandalism for chalking political messages on pavements during the city’s monthly ‘art walk’ event.  The support action involved handing out free chalk and leaflets giving details of the arrests.

The LA Police, in full riot gear, arrested anyone who chalked on the pavement. Matters escalated and police were soon using batons, tear gas, rubber…

On 8 August, all 16 OccupyLSX activists arrested at banner drop at Panton House, home of Xstrata, the international mining company on 30 November were acquitted of all charges after a five-day trial.

Bath The camp is still ‘packed up’, but individuals continue to meet up under the name the Bath People’s Assembly.

Bournemouth The camp was evicted in March, but activists continue to hold events. There are unofficial reports of an anonymous camp in Cherry Town.

Bradford A new camp was set up, in May, on a site owned by Westfield, now renamed ‘Wastefield.’

Brighton There are regular general assemblies and protests, but no camp.

Six Occupy activists were arrested at an Olympics occupation on 10 April. Occupy arrived at Porter’s Field, Leyton Marsh, on 24 March, to support locals trying to block the construction of Olympic practice basketball courts. Work on the site was suspended for two weeks because of the occupation.

After the high court granted the landowners, the Lea Valley regional park authority, an eviction order, bailiffs arrived at 7…

The Occupy movement in the UK was dealt a major blow on 28 February when bailiffs evicted protesters and removed their tents from outside St Paul’s cathedral in central London. There were 20 arrests during the clearance for the four-month-old camp.

The reverend Giles Fraser, who resigned as canon chancellor of St Paul’s in support of the protesters, said: ‘This is a sad day for the church.’ The court of appeal had decided on 22 February not to allow an appeal against the eviction…

Tensions between Oakland’s police department and the city’s Occupy movement erupted once again in late January, as officers used tear gas on a group of over 1,000 protesters who were throwing rocks and tearing down fences. In all, about 100 protesters were arrested on charges of failing to disperse.

Camps in Miami, Pittsburgh, Charlotte (North Carolina) and Portland (Maine) among other cities were either in the process of being cleared, or had already been vacated as PN went to press…

Groups who have dismantled their camps or been evicted from their buildings since the last issue include Edinburgh (14 February); Exeter (10 February); Liverpool (8 February); London’s Bank of Ideas (29 January) and Sheffield (13 February). (Almost all the groups mentioned here have their own websites or Facebook pages.)

Cardiff – Two members of Occupy Cardiff are being prosecuted for public order charges stemming from a demonstration in November. They held a 100-strong march on 7…

PN responds to Chris Hedges' attack on the "black bloc"

Progressive circles in the US have been furiously debating violence recently, after a forceful attack on the Black Bloc by radical journalist Chris Hedges. Hedges described ‘Black Bloc anarchists’ as ‘the cancer of the Occupy movement’: ‘obstructionist’ and ‘deeply intolerant but stupid’.

This brought an equally fierce riposte from radical anthropologist David Graeber, a long-time anarchist and Black Bloc participant, a co-founder of Occupy Wall Street and coauthor of what he…

On 17 January, high court judge Keith Lindblom ruled that Occupy LSX, the tent city that has stood in front of London’s St Paul’s Cathedral since 15 October, was unlawfully obstructing a public highway.

Enforcement was delayed until 24 January (after PN goes to press) to allow time for an appeal.

However, despite the prospect of losing the birthplace of the UK’s Occupy movement, residents of the St Paul’s Cathedral encampment told PN  they were not discouraged by the ruling. … 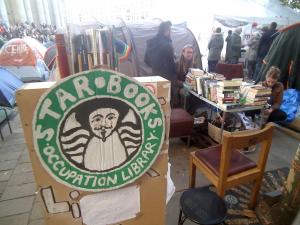 With bitterly cold winter weather affecting camps, the US Occupy movement is focusing on this year’s US presidential and legislative elections, set for November. The movement also organised a number of activities to mark the Martin Luther King Jr holiday in January. Occupy US is also planning a “Shut Down The Corporations Day” scheduled for 29 February.

Groups in CAPITALS were believed to be still occupying as PN went to press.

Bournemouth: After briefly occupying a vacant restaurant, the group searches for its next home.

Bradford: In early November, city officials issued an eviction notice to the occupiers living on Centenary Square. No new location yet.

Occupy diary glimpses from the north

Anna Harris on the occupations in Manchester and Bradford

Many of us find ourselves in situations where we feel we have nothing to offer, maybe because of personal circumstances; in one way or another weíre really stretched. And at the same time we see the suffering of humanity, see conflict and wars and destruction, and feel compelled to come forward. Yet we are naked and afraid.

We don't come full of promise, bursting with proclamations of what we will achieve. We come because we must. Because we have to respond, and we know we are being…

US movement battered but not yet broken

Hundreds of US citizens – including an 84-year-old pensioner, a pregnant woman, and a retired New York supreme court judge – have been threatened, beaten, pepper-sprayed or arrested, in a wave of government repression against the US Occupy movement.

On 25 October, over 100 were arrested during the clearing of the encampment in Frank Ogawa Park, Oakland – an operation that left Iraq war vet Scott Olson in a coma after he was struck on the head by a tear gas canister – though activists…