Police Spies out of Lives

On 3 October, in the Investigatory Powers Tribunal (IPT), the police failed to close down Kate Wilson’s human rights claim about secret political policing.

Kate Wilson is a social and environmental justice campaigner who had a two-year intimate sexual relationship with undercover police officer Mark Kennedy.

The IPT panel ordered the police to provide a fully-pleaded defence, supported by witness evidence, within three months.

These rulings were a response to…

On 21 November, Scotland’s supreme civil court, the court of session, ruled that the UK and Scottish governments acted correctly in not extending the Undercover Policing Inquiry north of the border.

The judicial review was brought by Tilly Gifford, an activist who was herself targeted by the police for surveillance.

She said: ‘This is a massively disappointing decision by the court. Our evidence is clear and sound – there has been undercover policing in Scotland, and it… 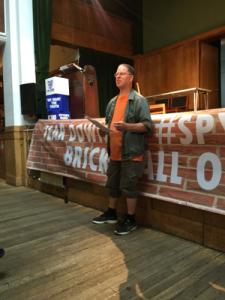 Dave Morris, one of the organisers of the ‘1968-2018: A Celebration of 50 years of Resistance, despite 50 years of police opposition, spying and repression’ conference at Conway Hall.photo: PN

The issue of undercover policing gained more attention in June because of a brave stand by Lush, the vegetarian/vegan cosmetics company. Then the Campaign Opposing Police Surveillance (COPS) and COPS Scotland held conferences in London and Glasgow on 7 July and 23 June, marking 50…

Today, 3 May 2018, former undercover police officer Jim Boyling has been found guilty of gross misconduct for pursuing an unauthorised sexual relationship with 'Rosa' (a pseudonym) using his false identity, failing to inform his line…

On 18 March, French prosecutors finally admitted that they were relying on information supplied by British undercover police officer Mark Kennedy, in a case against the Tarnac group of French activists, in a trial due to close just after PN goes to press.

Kennedy, who used the name ‘Mark Stone’ while undercover, was sent to France to spy on the Tarnac group in June 2008 as an officer of the UK national public order intelligence unit (NPOIU), according to secret NPOIU documents… 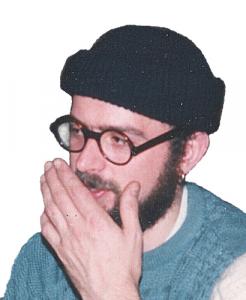 An internal manual for infiltrating activist groups, written by disgraced undercover police officer Andy Coles, has been made public by the Undercover Policing Inquiry

On 19 March, the Undercover Policing Inquiry (led until July 2017 by Christopher Pitchford) posted the previously-secret Special Demonstration Squad Tradecraft Manual on its website (see accompanying article for extracts). The Special Demonstration Squad (SDS) was a section of Special Branch, the British political police, devoted to undercover operations, which existed between 1968 and 2008.…

People targeted by undercover police walk out of the Undercover Policing Inquiry at the high court in London on 21 March. Photo: Razbigor

Dramatic developments in the #spycops scandal unfolded on 21 March, when people targeted by undercover police, their lawyer and their supporters walked out of the Undercover Policing Inquiry (UCPI) being held at the high court in London.

Baroness Doreen Lawrence backed the walk-out, saying that the chair of the inquiry, sir John Mitting, was…

Evidence to Pichford inquiry unlikely to be heard until mid-2019

The honest picture is that very little is coming out of the inquiry at the moment. To the alarm of many involved, we are being told that evidence is unlikely to be heard until mid-2019. That is five years after the inquiry was first announced, nine since undercover police officer Mark Kennedy was first exposed.

Much of the work done to date… 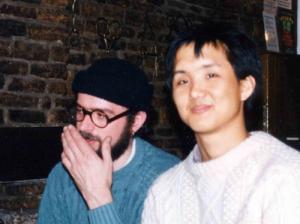 A PN worker remembers a narrow escape with a police infiltrator

16 March 1991: Undercover police officer Andy Coles (calling himself ‘Andy Davey’) tries to cover his face as he is photographed next to PN editor Milan Rai in a pub in Fairford, Gloucestershire, after an anti-war protest at a nearby US base. PHOTO: NOOR ADMANI

In 1991, I was living in London and involved in a nonviolent direct action affinity group called ARROW (Active Resistance to the Roots of War). The group had started with direct action against the 1991 Gulf War, and then broadened… 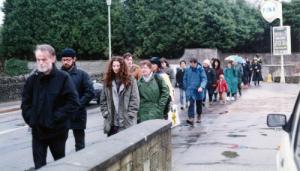 PN's editor recalls his experience of a 'police triple-decker sandwich'

My clearest memory of ‘Andy Davey’, the undercover police officer Andy Coles, is a bizarre moment that I would now describe as a ‘police triple-decker sandwich’.

On 10 February 1991, Christian peace activist Chris Cole and I had broken into the US air force base at Fairford in Gloucestershire to protest against the B-52 raids carried out from the base. (The B-52s were bombing Iraq.)

Coles was publicly exposed as a police infiltrator on 12 May, after investigation by the Undercover Research Group. On the same day, details emerged of an abusive sexual… 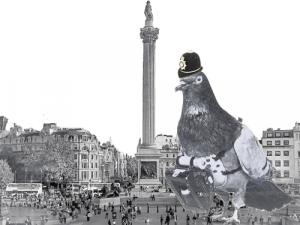 In early February, the crown prosecution service (CPS) dropped charges against 20 anti-fracking ‘protectors’ following the acquittal of John Wasilewski and David Cohen on 22 January, according to Netpol, the police monitoring group. (20 more cases were under review.)

District judge Sanders said he was not sure that either…

On 15 January, Kate Wilson, who was deceived into a relationship with British undercover police officer Mark Kennedy for two years, won a high court battle against Scotland Yard.

The Metropolitan police withdrew its attempt to defend against her claims of deceit, assault/battery, misfeasance in public office and negligence.