A new wave of affection﻿ 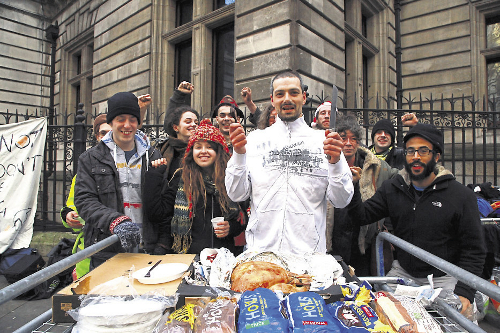 A network of direct actionists comes out of Occupy 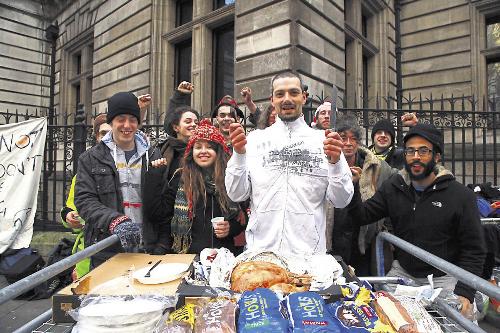 We will never cause harm, loss or damage to society or any community, any individual as they stand in an ethical capacity or the environment.

All ‘active’ splinter groups are autonomous and are not always directly linked to the centralised organisation, however all Love Activists groups communicate between one another. Love Activists Merseyside for example are currently engaged in environmental protection (against the development of Sefton Meadows green belt land in Liverpool), whereas Love Activists in Hastings and in Brighton provide a weekly street kitchen and support network for homeless people each weekend.

The current focus of Love Activists’ action is housing and homelessness. This takes root through street kitchen action, homes not banks, and free family holidays. Through our actions we aim to raise awareness and create discussion around issues of social importance so that solutions may arise.

Our housing and homelessness actions look toward uniting everyone on common ground so that we can begin to educate and take further steps on other equally pressing issues, such as: protection of our social services, free education for all, environmental protection and animal rights. Highlighting the misuse of power to see the fundamental human/animal/environmental rights realised.

As a movement we are:

21 October 2014 – founders Danny Freeman and Paul head to Parliament Square, London, for an Occupy Democracy protest. Danny climbs the Churchill statue in the square and stages a 28-hour stand-off against the Metropolitan police’s brutal treatment of demonstrators. Afterwards, Paul encourages Danny to use the publicity for something good.

1 November 2014 – The general intentions of Love Activists are decided between Danny Freeman and Paul. This has generally remained the same although it continuously evolves as the community grows.

13 November 2014 – Love Activists open their first building in Marylebone –doesn’t get much attention. It is two-thirds of the Western Eye Hospital, which is two separate buildings in its own right. An ex-homeless shelter and women’s hospital left to rot in the heart of Westminster. Dubbed ‘Love HQ’, Love Activists housed Occupy Democracy protesters and some homeless people here while organising direct action working groups. They were issued with paperwork on behalf of the minister for health and evicted early-mid December.

20 December 2014 – Love Activists squat a former NatWest Branch on Charing Cross Road, near Trafalgar Square, London, beginning their ‘Homes Not Banks’ direct action. An £80 million grade 2 listed building owned by an offshore holdings firm worth only £9. Illegally evicted on Christmas Eve, the group nevertheless succeeded in providing Christmas dinner to homeless people on the pavement opposite the former bank. This street kitchen grew into a month-long 24-hour service, which saw the establishment of active autonomous Love Activist splinter groups in Hastings, Brighton and Merseyside, who continue to provide Love Kitchen services in their local areas. It also saw the founding of Love Hacktivists.

6 June 2015 – Love Activists Brighton, along with other groups at the End Austerity Now March in Brighton, occupy a former Barclays Bank branch. The Radical Bank Community Centre opened its doors to the public 14 June, 2015.

July 2015 – Love Activists and the Fire Brigades Union pledge mutual support for one another.

17 August 2015 – Love Activists create a free family holiday in Runnymede Eco Village, Surrey. Recognising the need to offer a free summer holiday in a natural setting, for families feeling the burden of Conservative government cuts. Every child deserves a summer holiday - a follow up event has been scheduled for Halloween (October half-term).

Present (2015-16) – Love Activists are playing a leading role in the Operation Safe Winter Campaign started by the international hacktivist network Anonymous in the winter of 2013. The Homes Not Banks actions continue and Love Activists prepare to further expand their networks and diversify the actions they are involved in.