The Clandestine Insurgent Rebel Clown Army (CIRCA) has reclaimed the art of Rebel Clowning: its combatants don't pretend to be clowns, they are clowns, real trained clowns. Clowns that have run away from the anaemic safety of the circus and escaped the banality of kids' parties.

CIRCA aims to make clowning dangerous again, to bring it back to the street, restore its disobedience and give it back the social function it once had: its ability to disrupt, critique and heal society. 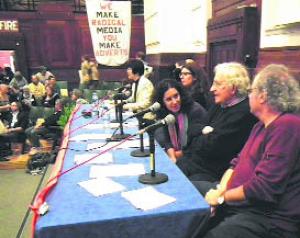 The final plenary of the Rebellious Media Conference at Friends House

The RMC opened with a keynote speech by US media critic Noam Chomsky, who was introduced by his long-time friend and radical media pioneer Michael Albert, co-…

On 3 October, over 100 people opposed to new nuclear build will blockade Hinkley Point nuclear power station in Somerset. This is where French energy giant Electricité de France (EDF) wants to build the first new nuclear reactor in the UK for 16 years. Following the Fukushima disaster in Japan in March, Germany, Italy and other countries are turning their backs on nuclear power, or are having a rethink. Not so for the UK, for whom it’s business as usual.

In July, the formerly anti-…

Uncivilisation 2011, the Dark Mountain festival, sold all its 300 (£60) weekend tickets and took place from 19-21 August at the Sustainability Centre in Hampshire. The festival was born out of the Dark Mountain Project and its manifesto, conceived by Paul Kingsnorth and Dougald Hine. The manifesto, which “starts with our sense that civilisation as we have known it is coming to an end; brought down by a rapidly changing climate, a cancerous economic system and the ongoing mass destruction of…