It is now suspected that Moroccan bribery may have led to a human rights activist from Western Sahara not making it to the shortlist of the prestigious Sakharov Prize for freedom of thought in 2021.

Sultana Khaya told the Italian newspaper, Il fatto quotidiano, how joyful she was to hear she had been nominated: ‘This candidacy seemed to me to be a great help. We needed someone to literally save our lives. This candidacy felt like an important link with the outside world.’…

19 Saharawi activists continue to be unjustly imprisoned for their involvement in a nonviolent protest camp in Western Sahara in 2010, Human Rights Watch and Amnesty International reminded us on 8 November.

When Moroccan forces brutally broke up…

Western Sahara action in the UK

This autumn sees a burst of activity in Britain over Western Sahara, ‘Africa’s last colony’ – in court, in parliament, in conference and in supermarkets

Western Sahara, which has been illegally occupied by Morocco since 1975, saw a long ceasefire between Morocco and the Polisario liberation front, from 1991 until 2020, when Morocco moved forces into a UN-patrolled buffer zone (PN 2648 – 2649). Scattered fighting is continuing in border areas.

Sultana had been under effective house arrest in occupied West Sahara since November 2020, during which time Moroccan security forces have raped her and sexually abused her sisters and her 80-year-old mother.

Sultana has had protection from house raids since Western solidarity activists came to stay with her on 15 March. However, other Sahrawis have been beaten for visiting or… 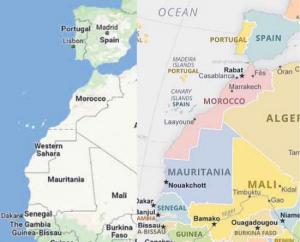 He writes: ‘If Biden really believed that…

In September, activists from Environmental Justice Ōtepoti blockaded a New Zealand fertiliser plant on the outskirts of the city of Dunedin.

They were protesting against the use of ‘blood phosphate’ from Western Sahara by Ravensdown, a farmers’ fertiliser co-operative.

Western Sahara has been illegally occupied by Morocco since 1975. As the phosphate is extracted by a Moroccan state company, OCP, without the consent of the Sahrawi people, it cannot be legally traded.…

In July, French citizen Claude Mangin-Asfari was prevented for the fifth time from visiting her husband, the Sahrawi political prisoner Naâma Asfari. She flew into Casablanca on 8 July and was refused entry to Morocco – and put on the next plane back to Orly.

Naâma Asfari is serving 30 years in the notorious Kenitra prison in Morocco for helping to organise the Gdeim Izik protest camp in 2010.

British companies are involved in the illegal exploitation of phosphate from Western Sahara, a new report has revealed.

One of the resources that Morocco illegally exports from occupied Sahrawi territory is phosphate, the element used in artificial fertilisers. Western Sahara has been one of the world’s largest suppliers of high-quality phosphate rock.

The government of Morocco will go a long way to prevent Westerners hearing criticism of its policies in Western Sahara, which it has illegally occupied since 1975.

The government reportedly forced the Arab World Institute (AWI) in Paris to cancel a concert by Saharawi singer Aziza Brahim, due to sing on 10 March as part of an ‘Arabofolies’ festival dedicated to women and resistance.

According to RFI, the French equivalent to the BBC World Service radio station, Moroccan…

The European Union is undermining the Western Sahara peace process.

On 16 January, the European parliament agreed that a new trade deal between the EU and Morocco would extend to the resources of Western Sahara, despite a 2016 European court of justice (ECJ) ruling against such exploitation.

Green MEP, Heidi Hautala, a vice-president of the European parliament, denounced the deal.

Western Sahara has been illegally occupied by Morocco since 1975. The ECJ…

More than 7,000 people marched for a free Western Sahara in an annual march in Madrid on 17 November.

While Western Sahara continues to be illegally occupied by neighbouring Morocco, it is illegal to extract resources from the territory (because there cannot be consent from the Saharawi people).

Irish/UK oil company San Leon Energy, registered on the Alternative Investment Market in London, is the only company to have drilled onshore for oil in Western Sahara during 43…

Geoex Ltd, a geological services company based in Kent, has been helping Moroccan state oil company OHNYM survey for gas and oil off the coast of Western Sahara. Western Sahara has been illegally occupied by Morocco since 1975, making such exploration illegal as it takes place without the consent of the Saharawi people.

Regular readers will know that Polisario, the liberation movement for Western Sahara (illegally occupied by Morocco since 1975), managed to get a cargo ship full of phosphate rock (illegally mined in the territory) impounded by a court in South Africa last year.

We now know that the ship, the NM Cherry Blossom, will no longer carry phosphate from Western Sahara. Western Sahara Resource Watch calculates that the company that charters the ship lost £3.5m because of the year…

In May, a Moroccan state mining company, OCP, bought back phosphate that it had illegally mined in, and shipped from, Western Sahara. Western Sahara has been illegally occupied by Morocco since 1975.

The 50,000 tonnes of phosphate rock was seized in South Africa by court order a year ago (PN 2606 – 2607). It was put up for auction back in March, with a starting price of $1 million. The proceeds were due to go to Western Sahara’s national liberation movement, the Polisario Front.…

On 21 March, the European Union commission announced that it still wants to apply an EU-Morocco fisheries agreement to the waters of Western Sahara, despite two EU court of justice rulings that this would be illegal.

On 27 February, the court of justice ruled that the fisheries agreement would only be legal if it was not applied to Western Sahara, which has been illegally occupied by Morocco since 1975. This was in line with a previous decision in December 2016 that no EU trade…