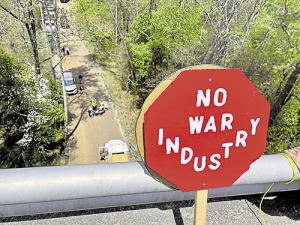 On 22 April, Earth Day, a local anti-militarist action group in North Carolina, USA, held a two-hour blockade of the construction site for a 1.2mn square foot jet engine manufacturing plant belonging to Pratt & Whitney (wholly owned by Raytheon Technologies, the second largest war corporation in the world). The ‘Reject Raytheon Asheville’ protest, called ‘Windmills Not War Machines’, was one of over 30 events in a week of mobilisation around the US sponsored by the War Industry Resisters…

Palestine Action (PA) has organised at least five more actions in the last two months. PA activists have had charges against them dropped – and they’ve also had house raids.

The first action in the latest run came on 24 January, when PA raided the UAV Engines factory in Shenstone, Staffordshire. UAV is a subsidiary of Elbit Systems, the Israeli arms company that produces 85 percent of Israel’s military drones, used in attacks on Palestinians in Gaza. 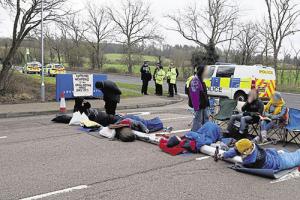 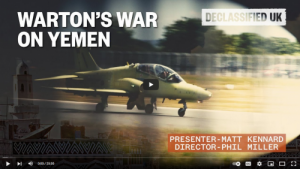 In their classic 1988 book Manufacturing Consent, Edward Herman and Noam Chomsky write that: ‘A propaganda system will consistently portray people abused by enemy states as worthy victims, whereas those treated with equal or greater severity by its own government or clients will be unworthy. The evidence of worth may be read from the extent and character of attention and indignation.... While this differential treatment occurs on a large scale, the media,… 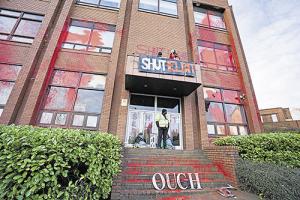 On 7 December, Irish Nobel Peace Prize-winner Mairead Maguire launched the ‘Downpatrick Declaration’ at the Saint Patrick Centre in Downpatrick, in northern Ireland. The peace statement, supported by a wide range of individuals and groups, condemns ‘NATO’s “War on Terror”’.

Before the start of the DSEI arms fair in East London on 14 September, there were several arrests as many protesters attempted to blockade the two service roads used by vehicles carrying military hardware into the ExCeL Centre.

This year, the mostly autonomous protests were co-ordinated by a coalition called ‘Stop the Arms Fair’ (STAF… 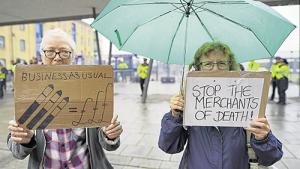 As part of the two weeks of protest against the Defence and Security Equipment International (DSEI) arms fair held in London’s ExCeL Centre, Stop the Arms Fair organised a Festival of Resistance on 11 September. They were joined by activists from Extinction Rebellion (XR), Campaign Against the Arms Trade (CAAT), Trident Ploughshares and others – there were even jointly-produced flyers available in the information tent (along with copies of PN). The XR activists I talked to all spoke… 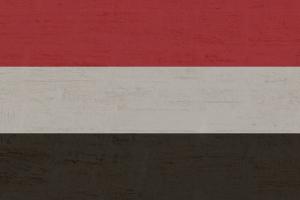 On 26 September, the secretary of state for international trade, Liz Truss, told parliament that the government breached a court of appeal ruling by granting further licences for military equipment to the Saudi-led coalition for use in Yemen.

This followed revelations the previous week that the government had breached the ruling on at least two occasions.

We are always being told how rigorous and robust arms export controls supposedly are, but this shows that nothing…

A major arms fair has been cancelled in New Zealand.

It was announced on 30 September that the annual Defence, Industry, and National Security Forum would not be held in 2019.

24 protesters were arrested for blockading the last two ‘defence forums’.

Auckland Peace Action said: ‘The nonviolent direct action tactics we have used have been effective at shutting this thing down for the past four years. Now the NZ Defence Industry Association has realised the…

On 23 October, the organisers of the Pride in London parade launched a wide-ranging consultation on the future of the LGBT+ event.

One issue in the online Pride survey was whether the parade should accept the participation of LGBT+ networks from ‘arms manufacturers’, ‘fossil fuel companies’ and ‘companies who profit from ecocide’.

Earlier, Pride had agreed to Extinction Rebellion’s demands that it become carbon-neutral in 2020.

The Metropolitan police more than doubled their spending on policing the protests against the DSEI arms fair in East London, a Freedom of Information request has revealed.

The Met spent £21m dealing with XR in October, much more than the £16m it spent in April.

By 10 October, XR itself had raised just over £2.5m in 12 months, according to the Financial Times.…

Some of the most influential professional engineering and science organisations (PESOs) in the UK have promoted fossil fuel and arms companies to schoolchildren – without discussing the ethical issues involved.

That was the finding of an investigation of 20 PESOs by Scientists for Global Responsibility (SGR) this October.

Separately, in November, SGR released a poll of climate-related attitudes among scientists, some working in fields connected to the climate crisis.… 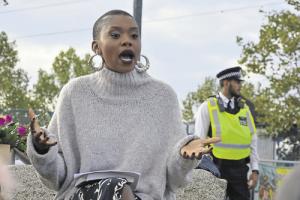 About 50 protesters were arrested for obstruction of the highway outside the ExCeL centre in East London on 'No Faith in War Day’, 3 September. They were among hundreds who had blockaded – for nine hours – an access road being used to ferry in exhibits for the DSEI (Defence & Security Equipment International) arms fair.

Gwynedd council in North Wales invests over £100 million in war, I discovered through a Freedom of Information request (FoIR). Gwynedd holds shares in Chemring, producer of gas canisters used against protesters in both Hong Kong and Tahrir Square; Lockheed Martin, whose bombs killed 40 children in a bus in Yemen; Safran who make navigation and rocket systems for nuclear missiles; and 83 other ‘defence’ companies.