Saudi arms ship Bahri Yanbu was deterred from loading weapons in France and Italy in May, after taking on six containers of Belgian arms in Antwerp on 3 May. (The ship also stopped in London’s Tilbury Docks on 7 May, but it is not known what was loaded.)

Yemen is the worst humanitarian crisis in the world, with 12 million people on the verge of starvation. Britain sold almost a fifth of Saudi Arabia’s weapons imports between 2013–2018, while France sold four percent of…

I attended the BAE Systems AGM because I wanted to provide a voice for Arabian people. The absolute monarch does not represent the people in Arabia. The house of Saud tries to kidnap our voices. BAE has fallen for the propaganda and presents the regime as a liberating force. I attended so that I could tell the board and shareholders about what is really happening to my people and land.

Not proud of BAE

Over 200 people have signed a petition calling on Pride in Surrey to drop arms manufacturer BAE Systems as a sponsor of its 10 August parade in Woking.

The petition asks the organisers of the lesbian, gay, bisexual and transgender (LGBT+) event to apologise and to ‘commit never to accept money from any who benefit from arming oppressive governments’.

One government named is Saudi Arabia, which is targeting civilians and causing a famine in Yemen – and which also… 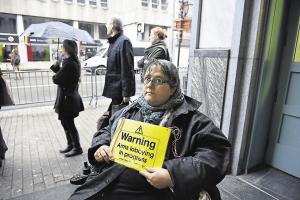 On 23 January, there was a noisy ‘Stop arming Saudi’ protest outside an arms dealers’ dinner at the Grosvenor House hotel in central London.

There was a sit-down blockade of the hotel, as guests filed into the aerospace, defence & security group’s annual dinner. The guest of honour was former home secretary, Labour MP Alan Johnson.

Andrew Smith of Campaign Against Arms Trade said: ‘Many of…

In an unusual step, BAE Systems, Britain’s largest military manufacturer, criticised one of its biggest customers on 26 January.

Roger Carr, BAE chair, told Sky News: ‘Two issues damaged the position of Saudi Arabia in the eyes of the world – the Khashoggi affair is one of them and also the war in Yemen.’

In relation to Jamal Khashoggi, ‘[p]oliticians didn’t believe the way that was done and handled was appropriate or acceptable and that’s exactly right’, said Carr (… 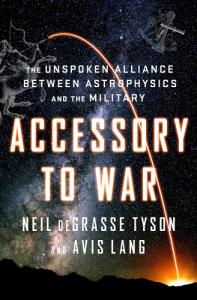 Neil deGrasse Tyson & Avis Lang, Accessory to War: The Unspoken Alliance Between Astrophysics and the Military

Curiosity blows things up. Or at least, it vaporises interesting rocks using a laser designed by the US nuclear bomb laboratory at Los Alamos.

I am here referring not to the intellectual motivation behind much of ‘pure’ science, but rather to Curiosity, NASA’s robotic vehicle that is analysing the chemistry of Mars. This particular sharing of technology between ‘warfighting’ and the frontiers of science is one of the many diverse and disparate facts that you might glean…

On 22 January, the high court ruled that four Christian peace activists who took action against the DSEI arms fair in September 2017 were actually guilty of highway obstruction at the ExCeL centre in East London.

Chris Cole, Henrietta Cullinan, Jo Frew and Nora Ziegler were all arrested (while locked-on to each other in pairs) on the ‘No Faith in War’ day of action during the run-up to the arms fair. On 7 February 2018, they were found ‘not guilty’ at Stratford magistrates’ court… 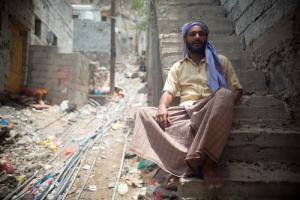 Extremely late in the day, in mid-November, Britain finally put forward a draft UN resolution calling for an immediate ceasefire in and around the Yemeni port city of Hodeidah, and setting out a possible peace process. This was over two weeks after the US started calling for a ceasefire in Yemen.

There was a counter-exhibition in mid-September, ‘From Nope to Hope: Art vs Arms, Oil and Injustice’, held by artists who had withdrawn their work from an exhibition about protest art at the Design Museum, also in London.

The artists withdrew their work after the museum held a private event for an Italian arms company.

Oh no, they can’t

On 6 June, the UK court of appeal ruled that the investment policies of local authority pension funds must not be ‘contrary to UK foreign policy or UK defence policy’.

This overturned a landmark high court ruling last year which said that the government had been wrong to issue ‘guidance’ on local authority pension strategies which contained those words. (PN 2608 – 2609)

The guidance also told local authorities they should not ‘pursue boycotts, divestment and…

Earlier this summer, Glasgow city council announced that it would not host any more arms fairs and three anti-arms trade protesters in Cardiff were acquitted of trespass outside an arms fair.

In Glasgow, there were protests against the Undersea Defence Technology (UDT) exhibition in Glasgow, sponsored by arms manufacturers BAE Systems and Babcock. Despite the criticism, the Scottish National Party-controlled council defended the UDT arms fair in mid-May, only withdrawing its ‘… 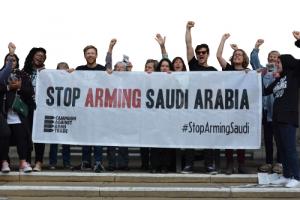 The public and press benches were absolutely full on the morning of 20 June, when the court of appeal in London ruled that the British government had acted ‘irrationally and unlawfully’ in allowing UK arms exports to Saudi Arabia for use in Yemen.

The ruling means that the government must not allow future sales to the Saudi-led forces that are at war in Yemen, and that it must review existing…

On 11 April, four defendants from Faslane Peace Camp were tried for aggravated trespass allegedly committed during last September’s week of action against the DSEI arms fair in London.

Most of the 102 activists arrested during the week of action were charged with highway obstruction. The Faslane four were the only protesters to be charged with aggravated trespass, even though their blockading actions were identical to those of many of the others arrested.

The Campaign Against Arms Trade (CAAT) has been given permission to keep putting the British government's arms trade policies on trial – over the Saudi-led war on Yemen.

On 4 May, the British court of appeal granted permission for the Campaign Against Arms Trade (CAAT) to appeal the legality of British arms sales to Saudi Arabia.

CAAT took its legal case to the court of appeal on 12 April for a one day hearing in an attempt to overturn a high court judgment which allows the UK government to continue to export arms to Saudi Arabia for use in Yemen.