We are sitting on the floor in a simple outhouse room attached to the Afghan Peace Volunteer’s compound, the unheated space is normally used for teaching local children various classes. Habib and his mother Mariam sit in front of us motionless, Mariam wears the burqa so it is not possible to read her face and ascertain how she might be feeling, the tentative expression on Habib’s face tells us that their life is hard.

It was around 2 months ago when I first met 12 year old Habib,… 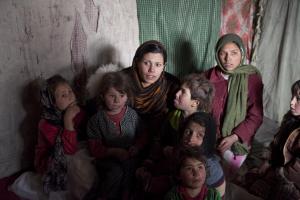 The sun was setting as my plane approached to land in Kabul. My first sights of Afghanistan were the snow-capped hills and gigantic mountain ranges which seemed to stretch forever.

As I got off the airport bus, I immediately headed for a queue with some other women in it. My pious Islamic outfit purchased from Whitechapel market only a week beforehand was probably too authentic as all the Afghani women wore western jeans and tops with scarves…

<p><span>Maya Evans is in Kabul with Voices for Creative Nonviolence. Photos by Guy Smallman.</span></p>

As we approached a cluster of ramshackle mud huts on the side of a motorway, our driver (a friend of a friend) warned us to be careful as two foreign journalists had been kidnapped in a refugee camp in Kabul only last year. I asked my friend (a young man and member of the Afghan Youth Peace Volunteers) if he was comfortable with accompanying me into the camp, he agreed that he was as we both stepped out of the car with Kiwi journalist Jon Stevenson.

The refugee camp near the Crystal…

<p><span>Maya Evans is in Kabul with Voices for Creative Nonviolence.</span></p>

We were lucky enough to receive an invitation to visit a self run community on the edge of Kabul, Chelsitun in Wasalabad; it’s a mixed Tajik and Pashtun community split into 8 sections, consisting of 2,000 households each having its own representative which implements Government initiatives and also manages security in the area.

Stepping into in Kabul

My first morning in Kabul, I went with Momajan and Roz Mohammed for my first real taste of the outside, a walk to the shops to change my money and top-up an internet dongle. I stepped out into the bright cold streets of Kabul. Initially I was blinded by the brightness of the sun and then choked by the pollution. My immediate thought was that I had stepped into Dickensian London only far worse, piles of rubbish on the street, open sewers running alongside the dirt pavements (also containing…

“Welcome to Afghanistan, land of the brave”

The Sun was setting as my plane approached to land in Kabul. My first sights of Afghanistan were the snow capped hills and gigantic mountain ranges which seemed to stretch forever. From the plane I could see meandering roads snaking round the endless mountain passes. It had just turned to dusk as I exited off the plane and onto the runway; I walked a few feet and onto a bus. The airport seems to double up as a military bay as the number of helicopters and fighter jets are also stationed…

Maya Evans prepares for her trip to Afghanistan

I sit with my Afghani friend in a coffee bar in St Leonards. Whenever we meet he is in a perpetual state of worry. Heís a few years younger than me though it's visibly obvious that in terms of life experience he is very much older. He expresses his ongoing concerns: will his mother die before he manages to return; will he get his citizenship in the UK; if he returns to Afghanistan will he be killed like his father and brother?

Life is a loaded die; it's more or less decided from the…

As Maya Evans prepares to leave for Afghanistan, PN tracks her progress.

Surprisingly we were left for around 40 minutes to blockade the gates of Downing Street, red paint daubed around the six of us, kneeling, heads bent in silence. I held up a large sign saying “End the Afghan War” while others in the group announced to passerbys that we were protesting about the 10 years of war with Afghanistan and that everyone should join us.

The delegate prepares herself

Maya Evans gets ready to travel to Afghanistan later this year.

Going to Afghanistan on a delegation with the US peace group Voices for Creative Nonviolence feels like the right thing to do, the natural next step following the last few years of my activity: a high court judicial review into British complicity in the torture of Afghan detainees, various actions, arrests, meetings, campaigns. I mentioned my intentions to a good friend, she immediately commented: “That’s a very brave thing to do.” I thought about it for a second and replied: “Either brave…

A member of Plane Stupid, Tamsin Omond, 23, is the media’s favourite eco-activist. She co-founded the women-led climate action group Climate Rush, which uses visual references from the suffragette campaigns. PN columnist Maya Evans, 29, an anti-war activist and first person to be prosecuted under SOCPA, met Tamsin to share thoughts across movements.

Routes into the movement
ME. My route into the movement started with anti-war campaigning back around 2003, with the run-up to the Iraq war. In late 2003, I decided to move down to Hastings and work for Justice Not Vengeance for a little while and then I ended up staying there.

TO. I was a bit young, I went on the big march but maybe I was something like 15. I definitely feel that the whole thing of creative protest, like your protest and the way we protest, is kinda like a…

Maya Evans and the bailiffs

"The morning after seeing Tactical Questioning – scenes from the Baha Mousa Inquiry, I woke up in a cold sweat. Harrowing images of people being tortured were still in my head. Tactical Questioning is a brilliantly-constructed play about the infamous Baha Mousa inquiry, covering the perspectives of those detainees who were horrifically tortured, the soldiers who took part in the savage free-for-all and the people at the top who carry a great deal of responsibility for what…

Grace Petrie, Tell Me a Story

“Tell Me A Story” is the opening track of Grace Petrie’s third album which shares the title with the rallying introductory song that will undoubtedly have you singing along and oozing optimism for humankind. Petrie has an earthy Bragg-influenced vocal style which is catchy and very pleasing on the ear with a turn of phrase which is effortlessly stylish.

The whole album is deliberately simple and in affect raw, full of passion and sincere conviction. The first track is without a doubt…

The Judge Lord Justice Laws looked over his glasses, he was a no messing kind of guy with a habit of cutting to the chase immediately. “So this £50- £100 k figure, where did it come from? Is it the governments?”

The defence Lawyer for the Secretary of State Mr Grodzinski flicked through his papers to find the source. Indeed it was the government’s calculated annual expense for judicial reviews- cost was the main justification which the Ministry of Justice had used to cut legal aid for…