Maya Evans is in Kabul with Voices for Creative Nonviolence. Photos by Guy Smallman. 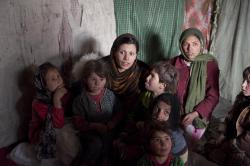 As we approached a cluster of ramshackle mud huts on the side of a motorway, our driver (a friend of a friend) warned us to be careful as two foreign journalists had been kidnapped in a refugee camp in Kabul only last year. I asked my friend (a young man and member of the Afghan Youth Peace Volunteers) if he was comfortable with accompanying me into the camp, he agreed that he was as we both stepped out of the car with Kiwi journalist Jon Stevenson.

The refugee camp near the Crystal Hotel in Karte Parwan Kabul is home to around 300 families each consisting on average of 9 people per family. The camp is separated from a motorway by a large ditch which judging from the strong smell of Sulphur contained raw sewage. We were directed over a rickety bridge to see the last sack of aid being carried away.

A gift of supplies from Peace News readers and Financial Times NUJ chapter had just been delivered (with the help of the camp elders). £2,175 worth of aid consisting of a lorry full of fire wood, 3 tones of sugar, tea and bread making flour which had been bought from a local wholesale market only a few hours before. 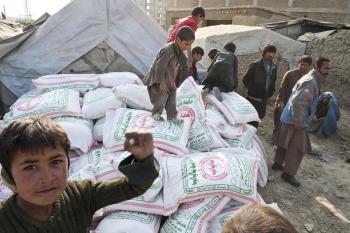 I was introduced to Raz Mohammed who is one of the camp elders; I was to learn that the camp has recently doubled in size as the municipal authorities in Kabul had just evicted a similar sized camp near the Kabul stadium. January is apparently the worst time of year with the health hazard of pneumonia, TB and Flu, also the little work which the men do get dries up.

I really wasn’t sure what to expect. I’d never been to a refugee camp before. I guess the closest I’ve come was camping at the travellers site Dale Farm in Essex during their eviction; to be frank that really wasn’t going to come close to the conditions at nameless refugee camp near Crystal Hotel.

Apparently the camp rarely receives visitors let alone foreigners, that coupled with the fact that a load of aid had just been delivered had created a euphoric mood, especially among the children. By the time I started to walk around the camp a small bunch of girls had latched onto me as the honouree guest. They greeted me warmly with big smiles and hugs, I’m not sure who they thought I was but it felt like my status was close to Mother Teresa.

The aid was perfectly timed as when I woke the next morning Kabul was covered with snow. I immediately thought about the people I’d met at the camp, the children without shoes walking over heaps of rubbish (which included used needles), the mud hut with little to no means of cooking let alone heating. My heart was with them and the 350,000 internally displaced Afghan refugees who didn’t receive aid the day before. 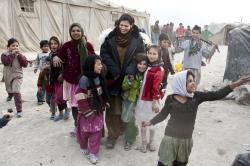 In 2011 Refugees International stated that Afghanistan has the most number of refugees in the world, reporting that air strikes and night raids by US/NATO forces were destroying homes, crops and infrastructure, traumatizing civilians and displacing tens of thousands of people. There is also the massive problem of foreign firms arming militia who have created violence in communities which also contributes to displacement. Indeed that very evening a story on Reuters about two British men detained in Kabul with 30 AK 47 assault riffles (without serial numbers), and “plenty of ammunition”. The Private Security Firm, Garda World, was dissolved the next day by the Afghan Internal Ministry.

I was quick to realise corruption and mistakes are only too prominent in Afghanistan, only two weeks ago the chief of the UNHCR Peter Nicholaus stated that policy towards refugees over the last 10 years has been the “biggest mistake UNHCR ever made”, largely because they encouraged the return of externally displaced Afghan refugees (UNHCR estimates that Afghanistan has the greatest number of refugees in the world, the figure is around 3 million). Those who have returned are now in the main, jobless, homeless and living in some of the poorest conditions currently experienced globally.

I spoke with a widow called Medina who pleaded with me to tell the people of Britain of their extreme poverty: no food, no blankets and no means to cook. As a widow she is in an impossible position, it’s still a novelty for women in Afghanistan to work, it’s become acceptable amongst the professional middle classes but for the lower class sectors of society there’s still a long way to go.

On behalf of Medina I send a stark reminder to the rest of the world, especially to NATO/US who have been able to find over $450bn to fight a disastrous and immoral war, the US/UK have spent only a tiny fraction of this sum on meeting genuine human needs in Afghanistan, with the result that millions of Afghans are now facing hunger and disease this winter. Refugees across Afghanistan urgently need aid otherwise deaths this winter will rocket.