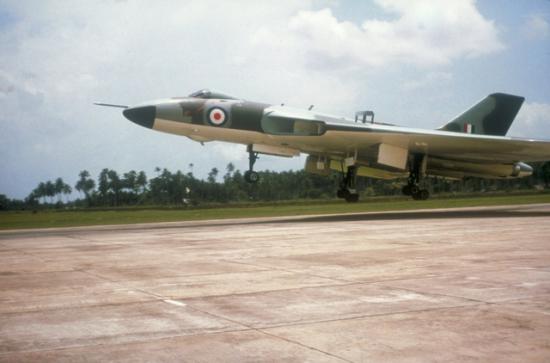 However... after reading Janet’s arguments very carefully, I’m even more convinced that Ban Nuclear Threats is the campaign we need right now.

The first point I want to make is that the British peace movement has failed to get to grips with the history of British (and US) nuclear threats against non-nuclear weapon states.

Ban Nuclear Threats, as a campaign in the UK, is a demand for the British government, the British public and, yes, the British peace movement, to really face up to and digest the history of British (and US) nuclear threats.

In our last issue, we had a front-page story, an editorial and a three-page essay all raising the history of British (and US) nuclear threats against non-nuclear weapon states. 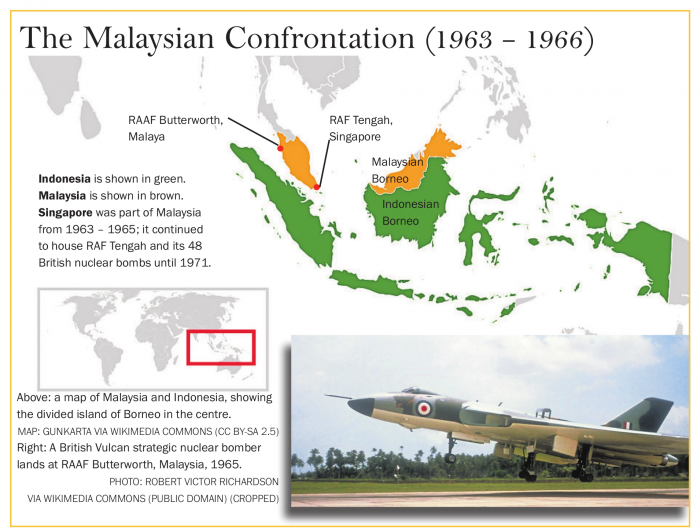 The graphic on this page is from the essay in that issue. It illustrates the deployment of British strategic nuclear bombers to Malaysia to intimidate Indonesia in the undeclared war (‘Confrontation’) in Borneo in the mid-1960s.

We know now that there were 48 British tactical nuclear weapons stored in Singapore at the time.

Indonesia was then, as it is now, a non-nuclear weapon state.

That was just one of several examples of nuclear threats that were mentioned in the last issue.

In Janet’s article opposite, which was commissioned as a rebuttal of the Ban Nuclear Threats call, there is no mention of any of these Western nuclear threats. There is mention of other important issues, such as the risk of accidental launch.

One important role for a Ban Nuclear Threats campaign is to help nudge the British peace movement to absorb and take in the shocking history of threats.

It may be that most British peace campaigners do not believe that these events took place – for example, the US nuclear threats during the first Taiwan Strait Crisis, in 1955, or the US/UK nuclear threats against Iraq in 1990 – 1991 and 2002 – 2003.

As the PN editor, I’d be happy to print letters or articles from peace campaigners who don’t accept the evidence presented in PN over the decades, and don’t think the US and Britain have ever issued nuclear threats against non-nuclear weapon states.

Alternatively, there may be British peace campaigners who think that such nuclear threats may have been made, but who don’t think we should campaign against them, or even mention them.

Again, I would be happy to publish the arguments of folk who hold such opinions.

I’m also happy to come to speak to any CND or other group, either as a public meeting or as a private discussion, to talk about Ban Nuclear Threats and the history of British nuclear threats.

It is a simple reality that campaigning in the UK in support of the TPNW, as important as it is, has not so far raised these issues or pushed the history of British nuclear threats into the light of day.

That just isn’t what the TPNW is centrally about.

There is one thing that wasn’t made clear in the last issue, which is that Ban Nuclear Threats is not solely or even mainly about negotiating a new international treaty.

There is an urgent need for such a treaty (on what are technically known as ‘negative security assurances’), but Ban Nuclear Threats is also about something quite different.

These promises should become legally-binding guarantees, perhaps part of the country’s constitution if there is one.

This is something that a state can do unilaterally – whether or not other nuclear weapon states join them.

It is possible that the TPNW is going to have most value in terms of creating a stronger alliance of non-nuclear weapon states.

If they can create Nuclear Weapon-Free Zones (NFZs), particularly if the NFZs are whole areas of the world rather than just a single country by itself, that will create real difficulties for the nuclear weapon states.

But the TPNW is not, by itself, a strong lever to change minds inside nuclear weapon states.

In much of the UK, for example, there is a deep-rooted belief that ‘we’ are responsible, ‘we’ can be trusted with nuclear weapons, and ‘we’ should have nuclear weapons – in order to deter the crazies, like Putin.

Not in Scotland, but in the rest of the UK, probably a majority of people believe that British possession of nuclear weapons is good for the security of the world.

Unfortunately, that complacent and powerful belief is not challenged or shaken in any way by the existence of the Treaty on the Prohibition of Nuclear Weapons.

It is perfectly possible for the average person to agree that, in an ideal world, there would be no nuclear weapons, and, at the same time, think that, in the awful war-torn jungle of rogue states that actually exists, it’s a good thing that ‘we’ have nuclear weapons.

That kind of thinking is not altered much by the TPNW coming into force.

However, that fundamental assumption is shaken, deeply, when people are forced to take account of the reckless, shameful, hidden history of Western nuclear bullying, particularly of British nuclear bullying and intimidation.

It is possible that the TPNW is most important for the non-nuclear weapon states (to increase their solidarity and their pressure on the major powers).

It’s also possible that Ban Nuclear Threats – or similar calls like No First Use – are most important for people inside the Western nuclear weapon states (to help undermine the state’s nuclear legitimacy in the public mind and to restrict the actual use of nuclear weapons).