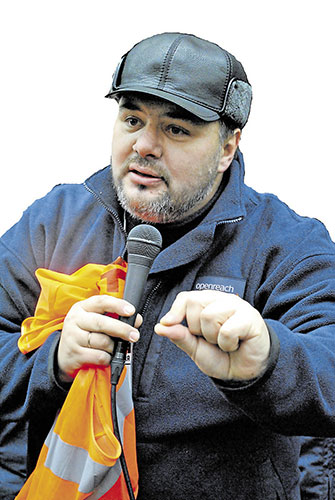 We condemn the Russian decision to invade Ukraine on 24 February 2022, which led to a fatal escalation and thousands of deaths, reiterating our condemnation of the reciprocal violations of the ceasefire envisaged in Minsk agreements by Russian and Ukrainian combatants in Donbass prior to the escalation of Russian aggression.

We condemn the mutual labelling of parties to the conflict as Nazi-like enemies and war criminals, stuffed into legislation, reinforced by the official propaganda of extreme and irreconcilable hostility.

We believe that the law should build peace, not incite war; and history should give us examples how people can return to peaceful life, not excuses for continuing the war.

We insist that accountability for crimes must be established by an independent and competent judicial body in due process of law, in result of unbiased and impartial investigation, especially in the most serious crimes, such as genocide.

We emphasise that the tragic consequences of military brutality must not be used to incite hatred and justify new atrocities, on the contrary, such tragedies should cool the fighting spirit and encourage a persistent search for the most bloodless ways to end the war.

We condemn military actions on both sides, the hostilities which harm civilians.

We insist that all shooting should be stopped, all sides should honour the memory of killed people and, after due grief, calmly and honestly commit to peace talks.

We condemn statements on the Russian side about the intention to achieve certain goals by military means if they cannot be achieved through negotiations.

We condemn statements on the Ukrainian side that continuation of peace talks depends on winning the best negotiating positions at the battlefield.

We condemn the unwillingness of both sides to cease fire during the peace talks.

We condemn the practice of forcing civilians to conduct military service, to perform military tasks and to support the army against the will of peaceful people in Russia and Ukraine. We insist that such practices, especially during hostilities, grossly violate the principle of distinction between militaries and civilians in international humanitarian law. Any forms of contempt for the human right to conscientious objection to military service are unacceptable.

We condemn all military support provided by Russia and NATO countries for militant radicals in Ukraine provoking further escalation of the military conflict.

We don’t call for any particular action now to ensure that peace plans will not be targeted by hatred and attacks of militarists, but we are confident that pacifists of the world have a good imagination and experience of practical realisation of their best dreams.

Our actions should be guided by hope for a peaceful and happy future, and not by fears. Let our peace work bring closer the future from dreams.

War is a crime against humanity. Therefore, we are determined not to support any kind of war and to strive for the removal of all causes of war.

Minutes from a war zone

The following is a news report by the Ukrainian Pacifist Movement:

Ukrainian pacifists adopted the above statement 17 April. At their meeting, a work plan was discussed regarding anti-war activities online and offline, advocacy of conscientious objection to military service, legal aid for pacifists and peace-loving civilians, charitable work, co-operation with other NGOs, education and research on the theory and practice of peaceful and nonviolent life.

Ruslan Kotsaba said that pacifists are under pressure today, but the peace movement must survive and thrive.

Yurii Sheliazhenko stressed that stubborn war prolongation around us demands of pacifists to be truthful, transparent and tolerant, insist on having no enemies, and focus on long-term activities, especially in the fields of information, education, and human rights protection; he also reported on a formal complaint filed against the state border guard for concealment of violations of the human right to conscientious objection to military service.

Ilya Ovcharenko expressed a hope that educational work will help people in Ukraine and Russia to realise that their meaning of life has nothing to do with killing enemies and military service, and recommended them to read several books of Mahatma Gandhi and Leo Tolstoy.

How can we help?

This is from an interview with Yurii Sheliazhenko, executive secretary of the Ukrainian Pacifist Movement, conducted in April by Werner Wintersteiner, founder and former director of the Centre for Peace Research and Peace Education at Klagenfurt University (AAU) in Austria.

WW: How do you think Western civil society can support Ukrainian pacifists?

YS: There are three ways how to help the cause of peace in such circumstances.

Firstly, we should tell the truth, that there is no violent way to peace, that the current crisis has a long history of misbehaviour on all sides and further attitudes like ‘we the angels can do whatever we wish and they the demons should suffer for their ugliness’ will lead to further escalation, not excluding nuclear apocalypse, and telling the truth should help all sides to calm down and negotiate peace.

Truth and love will unite East and West. The truth generally unites people because of its non-contradictory nature, while lies contradict themselves and common sense, trying to divide and rule us.

The second way to contribute to the cause of peace: you should help the needy, victims of war, refugees and displaced people, as well as conscientious objectors to military service. Ensure evacuation of all civilians from urban battlefields without discrimination on the ground of gender, race, age, on all protected grounds. Donate to UN agencies or other organisations helping people, like Red Cross, or volunteers working on the ground, there are a lot of small charities, you can find them in local social networking groups online on popular platforms, but beware that most of them are helping the armed forces, so check their activities and ensure you are not donating for weapons and more bloodshed and escalation.

Underdeveloped peace culture, militarised education which produces obedient conscripts rather than creative citizens and responsible voters, is a common problem in Ukraine, Russia and all post-Soviet countries.

Without investments in development of peace culture and peace education for citizenship we will not achieve genuine peace.