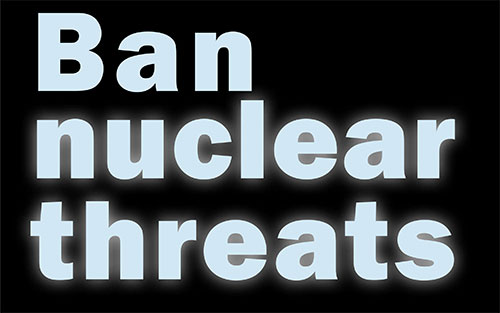 It's past time to ban the use of nuclear threats, argues Milan Rai

29 March: Over the last month, the brutal Russian invasion of Ukraine has cost tens of thousands of lives, forced millions of Ukrainians to become refugees – and created a world crisis. As we go to press, there are reports that there may be a ceasefire soon.

That seems unlikely until after Russia has captured Mariupol. The besieged and much-battered coastal city is the key to the land corridor linking Crimea, annexed by Russia in 2014, and parts of eastern Ukraine held by pro-Russian separatists. Securing this land corridor may be the one remaining Russian war aim.

While officials are downplaying the chances of a negotiated end to the war, Ukrainian president Volodymyr Zelenskyy has also told reporters, in Russian: ‘I understand it’s impossible to force Russia completely from Ukrainian territory. It would lead to Third World War. I understand it and that is why I am talking about a compromise. Go back to where it all began and then we will try to solve the Donbass issue.’ It’s not clear what this means at the time of writing.

The most urgent task is to bring about an end to the war. Another urgent task is to prevent the use of nuclear weapons. Russian president Vladimir Putin made such a threat when he launched his invasion (see p15).

Peace News is now calling for a ban on nuclear threats made for political or military advantage (see below for the text of our call). British peace activist Angie Zelter says: ‘I fully support the statement to ban all threats to use nuclear weapons’ and calls for people to join the Trident Ploughshares action camp in Scotland in June (see p24).

British security analyst Paul Rogers has made this response to our call: ‘Although it is assumed by most people in the UK that Trident is all about deterring another state from attacking the country with nuclear weapons, that is simply not the case.

‘For Britain, the threat of using nuclear weapons in the face of a conventional, not nuclear, attack has been part of the nuclear posture since the mid-1950s and still is. Calling for a ban on such threats is well worth arguing as yet one more step to accepting the inherent danger of any nuclear strategy.’

US peace activist Kathy Kelly has written to us: ‘Peace News has steadily emboldened people to resist the development, storage, sale and use of nuclear weapons. Now comes the crucial and overdue call to recognise threatened use of nuclear weapons as an act of war. Amen to this wakeup call. We must join Peace News in pledging to expose and resist the acute, cruel and potentially omnicidal danger of issuing nuclear threats.’

It is past time to ban the use of nuclear threats. As part of its full-scale invasion of Ukraine, Russia has issued verbal nuclear warnings, moved some nuclear weapons to the borders of NATO, and put its entire nuclear arsenal on alert. (See p15) Russia is using its nuclear weapons to protect its invasion force. It is warning NATO countries not to interfere directly with its brutal attack on Ukraine – or risk a Third World War.

This is just the latest example of a nuclear weapon state using the threat of annihilation to intimidate and bully other countries.

It is a ‘use’ of nuclear weapons when such threats are made, in the same way ‘that a gun is used when you point it at someone’s head in a direct confrontation, whether or not the trigger is pulled’.

Those are the words of US whistleblower, and former US nuclear war planner, Daniel Ellsberg, writing in 1981:

‘The notion common to nearly all Americans that “no nuclear weapons have been used since Nagasaki” is mistaken. It is not the case that US nuclear weapons have simply piled up over the years – we have over 30,000 of them now, after dismantling many thousands of obsolete ones – unused and unusable, save for the single function of deterring their use against us by the Soviets. Again and again, generally in secret from the American public, US nuclear weapons have been used, for quite different purposes: in the precise way that a gun is used when you point it at someone’s head in a direct confrontation, whether or not the trigger is pulled.’

In the essay this quotation is drawn from, Ellsberg listed 12 US nuclear threats, stretching from 1948 to 1981. More examples could be added from the last 40 years. There is also a record of British nuclear threats during military expeditions outside the NATO area – directed at Iraq in 1961, 1991 and 2003, and Indonesia in 1963 – 1966, for example.

It is past time to ban the threatened use of nuclear weapons to secure military, political or other advantages.

Many people in the nuclear weapon states believe that it is acceptable to possess nuclear weapons, and to be willing to use them to defend the homeland from nuclear attack or invasion.

However, we believe that the overwhelming majority of people in the nuclear weapon states strongly reject the use of nuclear weapons to gain military, political or other advantages – especially during military operations abroad which have nothing to do with the defence of the homeland from invasion.

We must reject the threat of such use as well.

It is long past time to ban nuclear threats as well.