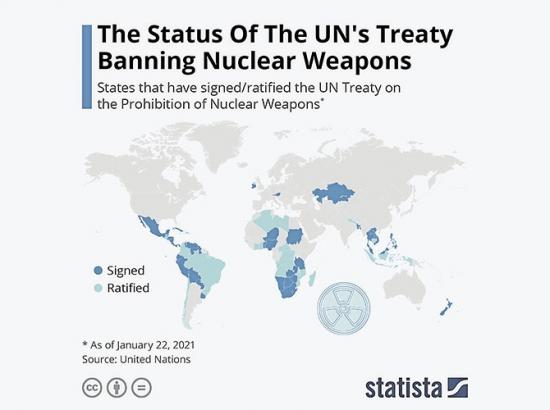 Threatening to use nuclear weapons is certainly a terrifying thing to do and has no part in peacebuilding or conflict resolution.

That is why it is treated in the same way as ‘use’ in the Treaty on the Prohibition of Nuclear Weapons (TPNW).

The TPNW specifically prohibits threatening to use nuclear weapons in its very first Article.*

We live under a regime that considers that the use of force up to and including nuclear weapons is justifiable and that it does not imperil us.

The mantra of ‘national security’ is repeated daily everywhere we turn, until, like the women accused of witchcraft in the 17th century, people doubt their own common sense to the point where they accept what rational minds would deny.

In Scotland, there is a parliament that has debated nuclear weapons and a government that opposes them and yet, in 2014, we somehow couldn’t quite manage to vote for the self-determination that would have enabled Scotland to leave the UK, and have the weapons removed from the Clyde, even though we knew that the UK government have no credible alternative to Scotland as their base for the nuclear submarines and the bomb store.

Last year, the Scottish parliament nuclear disarmament cross-party group hosted a meeting at which elected members of Dáil Éireann were in attendance, visiting to speak about how Ireland’s ratification of the TPNW brought it into Irish domestic legislation. [The Dáil Éireann is the Republic of Ireland’s equivalent to the house of commons in the UK – ed]

A member of the Scottish parliament was astounded to learn that the ratification was adopted unanimously by both houses of the Oireachtas [national parliament – ed]. They asked how that had been achieved, and the response was immediate and unhesitating. It was because the TPNW bans nuclear weapons. It’s a no-brainer, who would want to vote against that?

Going back to Ukraine and the Russian invasion, the potential for nuclear weapons use is greater than during the Cuban missile crisis.

In addition to the possibility of nuclear weapons use, dozens of nuclear power stations can be accidentally or deliberately targeted and the interpretation of any events around them will depend on trigger-happy military men.

“All the efforts and negotiations needed to create a Threat Ban will not help.”

Here are no twin powers playing out their ideologies, but a multiplicity of states and non-state actors with complex international relations and proxies, preparing to use illegal weapons and spouting macho discourse, escalating the global capacity to destabilise the entire planet.

The Ukraine situation pushes other less well-reported conflicts outside Europe off the aid radar, and is affecting trade agreements and supply chains everywhere.

How many mistakes did you make this week? Mislaid your keys, broke a shoelace or a cup, forgot to buy cat food?

Since the 1960s, communications have become instant and dependent on the internet.

How many things have gone wrong with your technology this week? Lost signal on your phone, Alexa playing up, website’s down and you can’t get tickets?

It’s in our human nature to make mistakes and technology always malfunctions sometimes.

This is part of the reason that total elimination is the necessary solution to the problem of nuclear weapons, rather than increasing the risk of accident or deliberate use, as is currently happening.

The other part of the reason attaches to the nature of the conflict itself, not the conflict between Russia and Ukraine, or East and West or between ideologies, but the real conflict which exists between those who think that transnational or intergovernmental differences can be effectively resolved through the use of force and those who think that we must work together sustainably in cooperation to look after each other and the planet.

Disarmament is the first step, and prohibition is the first step to disarmament. The TPNW entered into force last year (see PN 2650 – 2651). In June, countries which have already prohibited any nuclear weapons activity will get together in Vienna and firm up the blueprint for a nuclear weapons-free world, under the jurisdiction of the United Nations.

Although the UK government has declared that it will not attend, the TPNW already impacts its global relations and the financing of its nuclear weapons programme.

Many countries that have not yet joined the treaty and civil society representatives will attend as observers, contributing powerful advocacy.

The UK government habitually flouts or ignores international law and rule-based international agreements for as long as it can and then chooses to use any loopholes to suggest legitimacy for its conduct.

In the early 1990s, when the UK government was strongly opposed to the question of the legality of nuclear weapons even being put to the International Court of Justice (ICJ), it produced a lengthy report disputing the question being asked at all.

It now uses one clause in the ICJ ruling speciously to claim that it is acting legally.

So, all the efforts and negotiations needed to create a Threat Ban will not help, instead we should use, and challenge to UK to respect the hard-won Treaty on the Prohibition of Nuclear Weapons.

* TPNW Article 1 Prohibitions (1) Each State Party undertakes never under any circumstances to... (d) Use or threaten to use nuclear weapons or other nuclear explosive devices... (e) Assist, encourage or induce, in any way, anyone to engage in any activity prohibited to a State Party under this Treaty.

Janet invites us to find out more at: www.nuclearban.scot