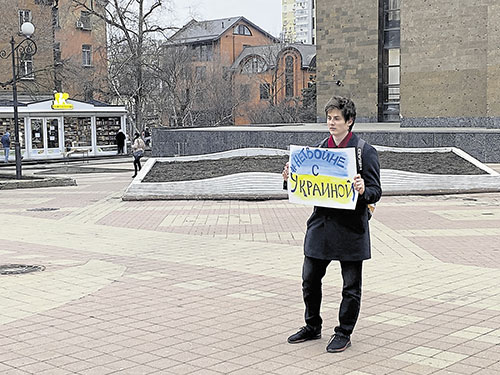 University student Stanislav Peresypkin holding a sign saying ‘#nowar with Ukraine’ in a solo demo, shortly before he was arrested, on 24 February in front of a library in Rostov-on-Don, Russia. PHOTO: PAVLJENKO VIA WIKIMEDIA COMMONS (CC BY-SA 4.0)

By 2022, the mass opposition movement in Russia was pretty much destroyed, so there were not many influential political forces that called on the Russians to protest against the invasion, yet some public figures did that.

The same morning, a human rights activist, Marina Litvinovich, who supposedly should have become a Duma deputy [member of parliament] in 2021 but was denied the mandate because of massive fraud, encouraged the citizens of Moscow to gather at Pushkin Square at a given time of the evening.

Litvinovich was soon detained by the police on her way out of her house.

Many regional activists announced protests at the same time in cities all across Russia.

The protests on the first day of the war seem to have been the most populous. Some estimate that about 2,000 people came out to protest in Moscow, and 1,000 in St Petersburg; by our estimates, these numbers are understated.

More than 2,000 people were detained by the police across the country. These might not look like huge numbers but they are for Russia, a country that has experienced intimidation of protesters and gradual tightening of protest laws for more than a decade.

It is also important to note that these actions were spontaneous: Litvinovich is an influential persona only in a limited circle of Muscovites, she had no access to television or big media outlets, and her appeal spread through retweets and interpersonal communication.

Since 24 February, protests continued every day but eventually they became less and less crowded and at some point ended.

The percentage of the detained, however, rose.

On 6 March, protests announced by the opposition movement, Socialist Alternative, and other activists gathered thousands of people across the country, with 5,000 people being detained, which is the highest number of detentions in a single day since the collapse of the Soviet Union.

In some police departments, there have been reports of cruelty and violence, let alone legal violations of protesters’ rights.

The most resonant case has happened in the police department of the Brateyevo region of Moscow, where several feminist activists who participated in the protests were beaten by the police.

One of the brave young women managed to record the torture on a voice recorder on her phone.

This horrifying audio is remarkable not only as proof of a crime but also because of the comments that the policemen make, saying, for example, that ‘Putin told us to beat the shit out of them [protesters]’.

Russians can now go to jail for up to five years for publicly condemning the ‘special operation’ or disseminating ‘deliberately false’ information about it.

This fact has greatly contributed to the end of mass anti-war protests. However, it did not stop many Russians from protesting against the war on their own, by picketing.

Spectacle of the unreal

It is a long-time tradition in the opposition movement in Russia to mock the absurdity of charges against protesters.

During the 2019 Moscow protests, for example, several citizens were accused of harming policemen by throwing plastic cups and bottles. In 2022, there are cases of other sorts: many people were detained for holding up empty pieces of paper instead of anti-war posters.

Indeed, it appears as though many people are turning picketing into provocative performances with the purpose to test whether such an action would be considered illegal by the police.

5,000 people were detained, the highest number of detentions in a single day since the collapse of the USSR.

The officials of a country that claims to have conquered Nazism ban the most harmless slogans: ‘Fascism will not pass’, ‘No to fascism’, ‘No to Nazism’, and ‘I am pro-peace’.

The same applies to the most popular slogan, ‘No to war’(Нет войне), which was chanted by protesters – and even posters in which the two words, Нет войне, constituting the Russian phrase for ‘No to war’, are replaced by rows of asterisks. This is a taunting remark on the fact that the government bans the use of the word ‘war’ because it is officially called a ‘special military operation.’

A viral video shows a policeman lazily erasing ‘No to war’, written in the snow on a statue’s pedestal, with his foot. The person who wrote it was fined for ‘granite inscription by removing the snow cover’ but the fine was later cancelled.

Other objects that people tried to test in relation to their illegality were a copy of Leo Tolstoy’s War and Peace, a meat package from a Russian brand, Мираторг, whose name has the Russian word for ‘peace’ (мир) in it, and a bank card from a Russian state-organised payment system: Мир.

Several administrative cases were later dismissed. For example, a person who held a quote from Orwell’s 1984 was released without charges. A quote from Putin’s 2021 anti-war speech, however, cost one citizen of St Petersburg 30 thousand rubles.

Then, some cases are so absurd that one can only wonder what happens in the heads of the police when they write the details down.

A citizen of Yekaterinburg was arrested for signalling in support of the protesters as he drove through the city.

In other cities, people were fined for ‘expressing silent support’ for the protests by standing nearby, or by ‘holding invisible anti-war posters’— yes, these are real excerpts from police documents.

A young Muscovite was sentenced to two years in prison for throwing a Molotov cocktail which did not cause any harm.

A philosopher from Moscow faces life imprisonment after he set fire to an OMON van with a Molotov cocktail in the centre of the city. [The Otryad Mobil’nyy Osobogo Naznacheniya ( Special Purpose Mobile Unit) is a paramilitary riot police unit in the Russian national guard, which some see as Vladimir Putin’s private army– ed]

Two men have been prosecuted for an attempt to set fire to an OMON van during the protests on 6 March.

In Krasnodar, a young man was detained for pulling out a couch in the middle of a city square, setting it on fire, and writing ‘EVIL’ on the asphalt. He explained that he’d done it because of his girlfriend, who is from Mariupol, a besieged Ukrainian city – he hasn’t been able to get through to her since the beginning of the invasion.

Some go even further and harm themselves in a symbolic act of outrage at a bloody war.

In another horrifying performance from St Petersburg, a young activist put a rope around her neck and handcuffed herself to a fence on a crowded street.

In May, a Yekaterinburg activist came out to a picket with an anti-war poster, having, quite literally, sewn her own mouth shut beforehand. She was allegedly forcibly sent to a psychiatric ward.

As we write this text on May 7 – 9, activists of a youth democratic movement Vesna (Весна), journalists of an independent internet outlet SOTA, and many other people, including ordinary citizens, are being detained in major Russian cities.

Supposedly, this wave of detentions and new criminal cases is connected to the plans for new anti-war performances on 9 May, Russian Victory Day, which is used in pro-war propaganda by the Russian authorities.

We stand with the detained and prosecuted for expressing an anti-war position.

University student Stanislav Peresypkin holding a sign saying ‘#nowar with Ukraine’ in a solo demo, shortly before he was arrested, on 24 February in front of a library in Rostov-on-Don, Russia. PHOTO: PAVLJENKO VIA WIKIMEDIA COMMONS (CC BY-SA 4.0)