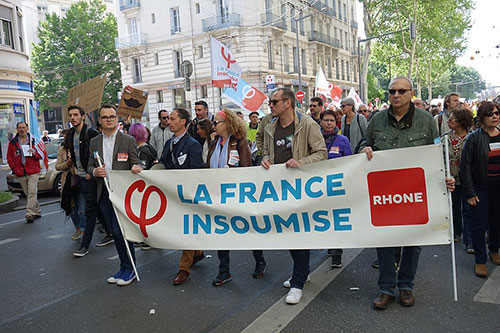 In French presidential elections, if no one wins an over 50 percent in the first round, the top two candidates go into a second and final vote two weeks later. The winner this spring was Emmanuel Macron, just as he was five years ago.

As a reminder to PN readers, the three leading candidates in the first round in early April obtained these shares of the vote:

Tactical voting, and skilful if uneven campaigning, partly explain the strong polarisation behind these three figures. The crystallisation into three blocs masks significant differences of opinion within each grouping, for example on Europe and national sovereignty on the left.

Despite their differences, the three blocs are now scrambling to form coalitions and partnerships, relatively successfully in the case of the left-wing bloc.

NUPES has an outside chance of forming the next government: this would usher in a new period of ‘cohabitation’ between a president and a government from different wings of the political spectrum.

The French peace movement will be united in supporting NUPES. The coalition’s policy on peace and disarmament, while it falls well short of what might be hoped for, is markedly different in tone, and in some areas also in substance, compared to the programmes of the other two blocs.

Mélenchon has regularly voiced his support for the Treaty on the Prohibition of Nuclear Weapons (TPNW), and his party’s programme, like that of the Greens, foresees French participation in the TPNW process, initially as an observer.

Disappointingly, but in line with his strong attachment to French sovereignty and French non-alignment and autonomy, Mélenchon repeats the government mantra that France should keep its nuclear deterrent until all other nuclear-armed states, starting with US and Russia, also (verifiably) disarm.

“Mélenchon’s LFI, like the Greens, call for an end to France’s military intervention in Mali.”

In view of the close synergies between the civilian and military nuclear industries in France, this sits uneasily with Mélenchon’s professed intention, restated in the pact with EELV, to gradually phase out nuclear energy.

Furthermore, Mélenchon has cast doubt on the credibility of the new SNLE-3G third-generation nuclear submarines currently under development as part France’s modernisation of its nuclear capabilities.

Mélenchon and his party, LFI, argue that technological advances threaten the undetectability of these new systems. They call instead for research into cyber and space technologies, though the question of whether such research is to be for military or peaceful purposes has not been fully clarified.

LFI are for progressive disengagement and ultimately the departure of France from NATO.

Mélenchon advocates – as do his coalition partners – democratic and parliamentary control over the French arms trade, and strict respect for the 2014 Treaty on the Arms Trade which France has signed but contravenes.

LFI, like the Greens, call for an end to France’s military intervention in Mali – and for France’s Africa policy to be based on civilian and economic cooperation, not military adventurism.

Disappointingly, LFI and, to a lesser extent, the Greens support maintaining France’s military spending at current levels ‘for the time being’.

Nevertheless, this appears relatively moderate when contrasted with the programmes of Macron and Le Pen. It seems even more moderate when compared with that of the right-wing firebrand Éric Zemmour, who won 7.07 percent of the vote in the first round of the presidential election in April.

All three propose very significant increases in France’s military budget, from €40bn to €50bn per annum for Macron, to €55bn Le Pen, and to a staggering €70bn in the case of Zemmour.

All three see military might as an essential vehicle of French power and influence, albeit with one marked difference. Macron wants to reinforce French and European power simultaneously, and as two sides of the same coin. Le Pen and Zemmour, on the other hand, want France to stand aside from alliances in which any national sovereignty might be diluted.

For all their differences, the left and the far right, are united in being challengers to the established order, whose standard-bearer is now Macron.

This is ironic: Macron sought to ‘break the mould’ and introduce a new politics. While he has certainly succeeded in all but destroying the traditional parties of the left and right, Macron now represents a form of continuity.

In style and content, his presidency exemplifies the authoritarianism and highly centralised leadership characteristic of the fifth republic (the constitutional system in place in France since 1958).

In view of his record during his first presidency, and the thinness of his plans for institutional change, Macron’s fresh promises to introduce a more consensual style of politics ring hollow.

The ‘Republican Pact’ by which, often with great distaste, left-wing and progressive voters cast their second-round vote for any candidate who can beat the far right, has just about held this year, but it is much less a matter of course than in the past.

Many in the French peace movement and on the left see Macron as no better than Le Pen. They see him as the incarnation of the structurally unjust and violent system which causes those who have been abandoned by the wayside to turn to the extreme right.

On immigration and racism, however, the left and the centre/centre-right still stand in marked opposition to the right and extreme right.

The voter share of the far right, its themes, and its appeal to elements within the traditional right have all progressed significantly in recent years.

Le Pen has portrayed herself and her party as reasonable and moderate. She has aimed to reassure.

Le Pen appeals to the more disadvantaged in society and has sought to portray herself as an empathetic woman close to the concerns – more specifically the cost-of-living concerns – of ordinary people.

However, the heart of her programme remains: French nationalism; a clear, unapologetic preference for French citizens; and, said under her breath, a deep-seated hostility to immigrants in general and to immigrants from Muslim countries in particular.

The constituency and approach of Eric Zemmour are quite different. Supposedly more high-brow and sophisticated, but actually very crude in his misogyny, racism, and extremism, Zemmour appeals to a wealthier and broadly better-educated section of the population, nostalgic for French grandeur and traditional values.

Unlike le Pen, Zemmour seeks to provoke; to present France as faced with an existential struggle for its very survival, as threatened with extinction as alien hordes take over.

It is difficult for a British audience to understand the degree of passion, and sometimes venom, with which questions of identity are discussed in France.

The republican ideal of ‘equality’ is easily distorted to suggest ‘sameness’. The wearing of a hijab or veil, even religion itself in a lay society, get portrayed as threats.

Some genuine tragedies have compounded the sense of threat in recent years, in particular the murder of history teacher Samuel Paty, assassinated by a Muslim fanatic for showing students satirical cartoons of the prophet Muhammad. Horror at such isolated incidents is easily exploited to create an explosive situation.

The rise of nationalism, militarism, and intolerance presents challenges for the various strands of the French peace movement, and how they address these will depend in part on the outcome of the June parliamentary elections.

Marc Morgan is a member of Haringey CND and Trident Ploughshares, and of the Mouvement pour une Alternative Non-Violente.

In the next issue, Marc will be covering the hopes, fears and priorities of the the French peace movement as it reacts to the June elections.