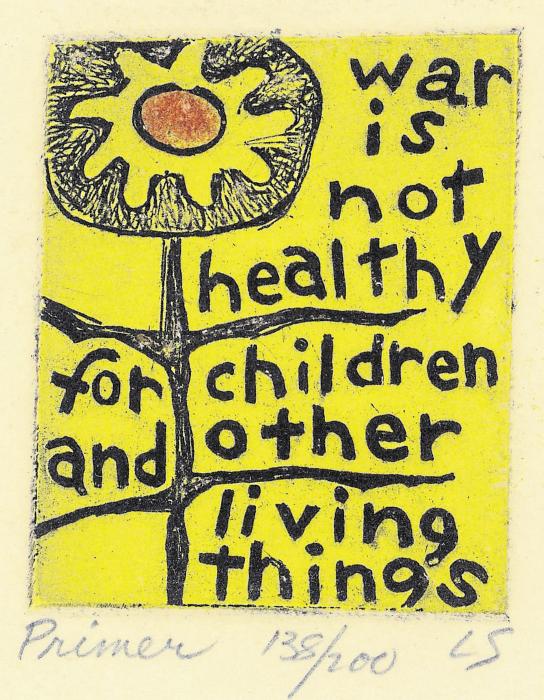 The group used it as the design for an anti-Vietnam war Mother’s Day card to be sent to politicians in Washington DC.

The inside of the card said: ‘For my Mother’s Day gift this year, I don’t want candy or flowers. I want an end to killing. We who have given life must be dedicated to preserving it. Please talk peace.’ 200,000 copies were bought and sent.

Barbara Avedon, a co-founder of Another Mother for Peace, wrote later: ‘We were not “bearded, sandaled youths”, “wild-eyed radicals” or dyed in the wool “old line freedom fighters” and we wanted the Congress to know that they were dealing with an awakening and enraged middle class — voters, precinct workers, contributors.’

Primer became one of the defining images of the Vietnam War period, and is one of the most reproduced anti-war statements of the modern era.

Lorraine, a friend and colleague of artistic luminaries such as sister Corita Kent, donated all rights to her image to Another Mother for Peace, which used it on posters, medallions, and other items to raise hundreds of thousands of dollars for the anti-war effort.

Lorraine was honoured at a United Nations Conference on Disarmament meeting in Geneva, Switzerland, in September 1972.

She told the conference how she came to design Primer: ‘It had to say something, something logical, something irrefutable and so true that no one in the world could say that it was not so.’

She added: ‘[I]t is up to us, the artists, the people who work in media, to prepare the emotional soil for the last step out of the cave. We can create symbols of the new day and light the world with our hope and the Neanderthals that attempt to restrict our freedom of expression, that attempt to frighten us into silence, that give you only four square inches with which to cry out your anger – use it.’

Elisa Schneider Kleven, Lorraine’s daughter, told PN: ‘The etching in the photo was so small that my mom couldn’t write her whole name on it, just her initials.’

Another daughter, Carol, once suggested that the four branches in the design represent Lorraine’s four children: Carol, Elisa, Mark and Susan.

Lorraine Schneider died in 1972, at the age of 47, shortly after returning from Switzerland.

Another Mother for Peace has been revived and its webshop features posters, stickers, medallions and other items with Lorraine’s design on them: www.anothermother.org/shop