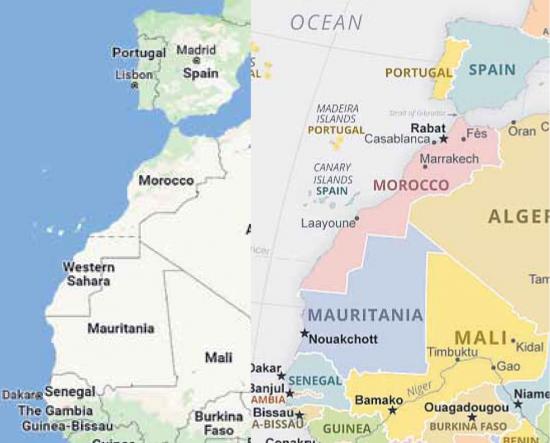 He writes: ‘If Biden really believed that countries have a right self-determination he would not refuse to recognise this right for Western Sahara, as the international court of justice [the world court] and virtually every country on Earth has called for, nor would he refuse to support Palestinian self-determination outside of the parameters agreed to by their Israeli occupiers.’

That’s professor Zunes’s words... As we see the Russian invasion of Ukraine play out, Stephen Zunes, talk about why you’re talking about Western Sahara.

STEPHEN ZUNES: Well, Trump recognised, formally recognised, Morocco’s illegal annexation of Western Sahara during his final weeks of his presidency. And like a number of impetuous Trump decisions, it was assumed that Biden would reverse it as soon as he came to office, particularly since a bipartisan group of congresspeople, career State Department officials and allied governments were encouraging him to do so.

He has refused to do so, however.

If you look at maps from the United Nations, from Google, from Rand McNally, National Geographic, whatever, they’re depicted as two separate countries. US government maps, by contrast, show Western Sahara as part of Morocco, no demarcation between them.

So, when Biden says that Russia has no right to unilaterally change international boundaries, that countries cannot expand their territory by force, he’s certainly correct. But he seems to think it’s OK if you’re a US ally like Morocco.

AMY GOODMAN: So, for those who aren’t familiar with Africa’s last colony, if you can explain, very quickly, how Morocco occupied Western Sahara?

STEPHEN ZUNES: Morocco seized the territory in 1975 on the verge of its independence from Spain. And Western Sahara – its formal name is the Sahrawi Arab Democratic Republic – has been recognised by well over 80 countries. It’s a full member state of the African Union.

So, what Biden is doing is he’s essentially recognising the conquest of one recognised African state by another at a time when he’s speaking sanctimoniously about how the world must unite against Russian aggression because it violates long-standing international legal norms.

The international court of justice, the United Nations security council, United Nations general assembly, the Organisation of African Unity all called for the withdrawal of Moroccan forces and an act of self-determination such as a referendum. But the United States has quietly supported the occupation ever since ’75 and in 2020 made the recognition official.

STEPHEN ZUNES: Well, the United States is also the only country in the world that has formally recognised Israel’s illegal annexation of Syria’s Golan Heights.

We’ve made a de facto recognition of Israel’s annexation of greater East Jerusalem.

And since the Trump administration, we have considered the illegal settlements as part of Israel. And so there’s a link there.

And what’s interesting – and this development just happened last week – we had thought we had scored a great victory when congress blocked US military co-operation with the repressive armed forces of Morocco until Morocco agreed to find a mutually acceptable political solution to Western Sahara.

“What if Russia conquered 80 percent of Ukraine and offered some vague form of autonomy under Russian sovereignty?”

But the Biden administration just recently claimed that Morocco had done so via their dubious autonomy plan, which denies the people their right to self-determination, as the United Nations and World Court has demanded.

[The Moroccan autonomy proposal] rules out independence and makes permanent the occupation.

I mean, if Russia conquered 80 percent of Ukraine and offered some vague form of autonomy under Russian sovereignty, would Biden find that it constituted a mutually-acceptable political solution?

And, again, we are a big outlier here, just as we’re trying to lead the world in upholding these international legal norms against the expansion of territory by force.

… Support for this so-called autonomy plan was reiterated by US under secretary of state [Wendy] Sherman just 10 days ago....

So, if this autonomy proposal does get international acceptance, it will be the first time since World War II, since the signing of the United Nations Charter, that a country has gotten away with expanding its border by force and that a colony has been denied the right of self-determination.

And this is particularly bad timing given the increasing repression [by Morocco in Western Sahara].

I mean, not only [have] Amnesty International [and] Human Rights Watch documented [human rights] abuses... but Freedom House, a US-based group that has a quantitative analysis of relative human rights records, noted that, of 210 countries in the world, Moroccan-occupied Western Sahara has the worst score in terms of political rights [compared to] any [other] country in the world, save for Syria.

And, so, the idea that this autonomy is going to give the people of Sahrawi their rights, I mean, we’ve seen what happens when authoritarian states grant so-called autonomy to regions.

We think of Ethiopia and Eritrea, Serbia and Kosovo.

It doesn’t come out well.

This is the transcript of ‘“U.S. Hypocrisy on Ukraine”: Biden Admin Remains Silent on Morocco’s Occupation of Western Sahara’, a Democracy Now! segment on 21 March.

The video and transcript for this episode can be found here: