Last month, peace activists held commemorations in Manchester (13 May), London (15 May) and Birmingham (20 May) to mark the thirtieth International Conscientious Objectors’ Day. 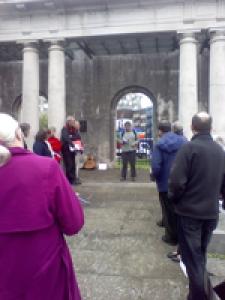 Bill Hetheringon: The London ceremony was held on ICO Day itself, at the CO commemorative stone in Tavistock Square near Euston. There was an Amnesty International update on the long-standing harsh treatment of COs in Eritrea and South Korea, and the laying of white flowers commemorating 80 named objectors from as many countries around world over the past century.

The event ended with singing by the Raised Voices choir.

Janet King: In Birmingham, around 20 people came to the…