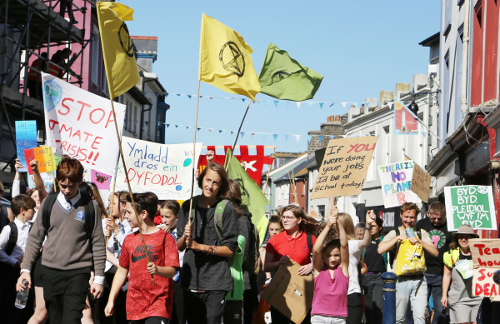 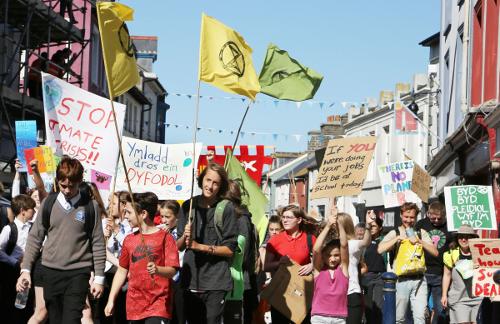 20 September saw school children strike for climate again across Wales, supported by many adults. At the Centre for Alternative Technology, students, visitors, staff and volunteers showed their support for the Climate Strike, sounding alarms to signal that ‘time’s up’ for action on climate change, and reading out words from young climate strikers from around the world.

In Aberystwyth, strikers held a People’s Assembly in the main road.

Splitting into groups, they discussed proposals to the local council for immediate low-cost measures to mitigate climate change.

These included: cycling to school and work (made safe by volunteers); greater use of public transport; no meat at school; a garden share scheme; a council-run lift share scheme; divesting pensions from fossil fuel; better communication between the council, the public and businesses; community wind schemes and electric transport.

Perhaps most hopeful was the way in which the groups facilitated their discussions and reported back to the assembly – true democracy in action.

Knighton’s Angie Zelter said: ‘We have asked the attorney general to allow us to bring a case against the prime minister and defence secretary for conspiring to commit a war crime. We have evidence that deploying Trident is such a conspiracy. It is a crime to threaten mass destruction. The court needs to hear evidence. The attorney general has refused. That’s why I am here. Corporations and governments are not above the law.’

Bangor Climate Strike, which ‘represents all ages in Bangor demanding urgent action on climate change’, marched on 25 October. The action was boosted by Greta Thunberg, who tweeted her support for Bangor to her 2.9 million followers.