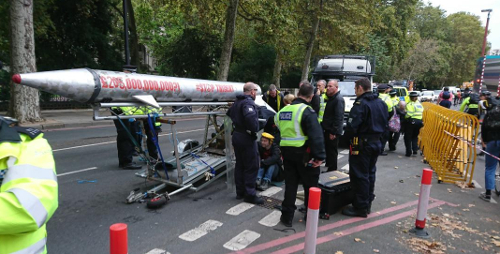 XR Peace, formed in July, calls on the UK government to tell the truth about the impact of militarism on climate change and the large military ‘carbon bootprint’ and also to redirect resources from the military to address the climate and ecological crisis.

XR Peace started its activities on 7 October, when 23 people were arrested during a six-hour 75-person blockade outside the ministry of defence (MoD) in Central London. Starting at 6am, two people locked-on to their car and another three locked-on to a mock Trident missile.

The next day, XR Peace Rebels held a die-in at the Whitehall gate of the MoD, sitting and lying for hours in heavy rain after pouring fake blood onto the ground to represent the planet dying from the twin existential threats of climate change and militarism. There were no arrests.

However, two XR Peace Rebels were arrested while blocking police coming up Whitehall.

On 9 October, four people were arrested during another die-in at the main MoD entrance in Horse Guards Avenue. On 10 October, one XR Peace campaigner was arrested in Trafalgar Square while supporting other Extinction Rebellion activists.

On 14 October, six activists were arrested when XR Peace blockaded the BAE Systems office at 6 Carlton Gardens, making the links between the climate and ecological emergency and UK arms sales to Turkey and Saudi Arabia.

That same evening, five people were arrested while locked-on to each other in the XR Peace gazebo when the police ‘cleared’ Trafalgar Square.

On 17 October, three XR Peace activists were arrested after they glued and locked themselves onto the doors of Leonardo UK’s HQ in Great George Street. Leonardo provides guidance systems for missiles used in Yemen and Syria. A fourth protester was arrested for holding a banner.

Just over an hour later, at 9.30am, eight XR Peace activists were arrested after they glued themselves together at the Supreme Court entrance in defiance of the section 14 restrictions on any Extinction Rebellion protests in London.

At 11am, three people were arrested when four more Peace Rebels glued or locked themselves onto the door at Lockheed Martin’s London HQ. Lockheed Martin is one of the biggest arm companies in the world, supplying weapons in Yemen and Syria.

The following day, 18 October 2019, two XR Peace Rebels were arrested as part of the XR blockade of Oxford Circus.

Angie Zelter is co-facilitator of XR Peace with Jane Tallents.