David McDermott Hughes, Who Owns the Wind? Climate Crisis and the Hope of Renewable Energy 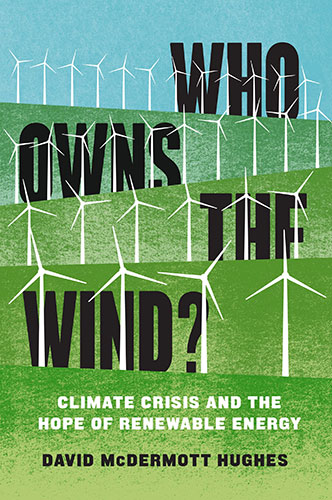 ‘The sky is a cornucopia – heaven, not so far from earth. We have to guard that cornucopia against industries and interests that would make it scarce.’

Thus writes anthropologist David McDermott Hughes, on the final page of this enthralling book. It’s simultaneously a call for a new ‘socialism of the wind’ and an in-depth exploration of the social, political and cultural challenges facing the renewable energy revolution.

Firstly, we urgently need to rapidly move the world’s energy system from fossil fuels to renewables, in order to address the climate crisis.

Secondly, done right, renewable energy could usher in an era in which, in the words of anarchist theorist Murray Bookchin (writing over 50 years ago!), ‘collective abundance and cooperation transform labour into play and need into desire.’

Yet, Hughes notes, just as they enclosed land, fishing rights and the airwaves in the past, wealthy interests are now in the process of ‘enclos[ing] moving air’ – ensuring that this previously untapped source of wealth flows primarily to the already-haves.

The legal status of airflow has yet to be adjudicated: ‘In that vacuum, turbine operators and landowners have established a wind right.’

Meanwhile, ‘many architects of renewable energy don’t necessarily want the wind industry to flourish – not to the extent that matters in planetary terms’ – preferring to keep it a scarce (and therefore high-value) commodity.

In contrast, Hughes proposes that ‘governments could socialise or nationalise the airflows above us’, ensuring that we all benefit from the roll-out of wind power, forever.

‘It might just be easier to grab this huge thing – which is hardly recognised as a thing – than to win the age-old struggle for an equal share of more well-known things’, such as land, Hughes writes.

To date, this idea has gone unmentioned in such bold proposals as the US Green New Deal or the (Corbyn-era) Labour Party’s plan for ‘publicly-owned energy networks’.

The book’s other main thread concerns the many human challenges involved in the transition to renewables.

Over the course of three years, Hughes spent six months in the tiny Spanish village of ‘Sereno’ (not its real name), bringing his professional expertise to bear on a settlement more closely and more densely surrounded by wind turbines than any other. There, 250 turbines fill a valley three miles wide and six miles long.

‘The proliferation of machines from a sprinkle to saturation is not an engineering project. It is a social, political and aesthetic struggle with and against reasonable, humane people’, he notes.

Seven of the book’s eight chapters focus on this, exploring how wind power relates to property, work, noise, beauty and landscape, as well as to the meaning and limits of solidarity for the village’s inhabitants.

He recounts the unsuccessful campaign, led by a painter, to stop the building of the turbines. This involved a 200-vehicle convoy (from a village of only 400 people), a blockade of the construction site, and resisting bribery. The villagers formed an alliance with local landowners, but the latter sold them out as soon as the price was right.

The Sereneños lost their battle, but a nearby town succeeded in cutting a 708-turbine proposal to 158 turbines, and wind power construction has generally stalled in Spain as a whole.

But there are other problems beyond the sense of imposition and the unfair distribution of benefits (‘If only the landowners will gain, I say “no!”’, one villager tells Hughes).

There is the ‘Eden problem’ – the deeply-rooted idea that ‘one should work industriously… and enjoy the fruits of that labour’. Wind power does not work this way. Once built, the turbines ‘virtually run themselves’.

And there is the problem that, unlike coal – the dangerous mining of which created intense feelings of loyalty, remaining ‘the stuff of legend’ – wind turbines have thus far been ‘too safe for storytelling’.

To survive and thrive, Hughes believes, wind power needs to ‘churn through our backyards and through society… provok[ing] emotions and stories around it.’

(One paradox, Hughes notes, is that ‘turbines will [only] seem epic when they spin in large enough numbers to replace fossil fuel and stabilise the climate, but the public won’t accept large numbers until they take on that moral significance.’)

And then, of course, there is the question of aesthetics. ‘Steel and concrete rupture the view and the home’: ‘Proponents of wind power need to take these feelings seriously.’

I had my own encounter with these sentiments during a recent door-knocking exercise in the small village of Robertsbridge in East Sussex. ‘How would we keep the lights on without fossil fuels?’, I was asked. As soon as I mentioned wind power, the rejoinder came: ‘But wind turbines are an eyesore.’ No matter that we’d just been talking about the risk of hundreds of millions of people being displaced by the effects of catastrophic climate change.

For what it’s worth, my own encounters with wind turbines have been wholly positive. To stand directly underneath one as the blade descends is an exhilarating – as well as a terrifying – experience!

Hughes has some interesting – and sometimes highly culturally-specific – ideas about how to address these issues (for example, the idea that, at the end of their working lives, wind turbines could be ritually ‘killed’ like one of the bulls in the region’s still-popular blood sport).

Finally, Hughes considers whether presenting wind power as a form of ‘altruism for the planet’ could be a viable way of inspiring support.

The Sereneños describe themselves as selfish, yet – to his own surprise – Hughes actually discovers a rich and widespread local tradition of practical solidarity with undocumented refugees and migrants crossing the strait from north Africa.

However, when it comes to wind power and global solidarity, Hughes is forced to confront a crucial truth: ‘rather than replacing fossil fuels, wind farms are [currently] supplementing them’. Moreover, this has been ‘the global story of wind and solar power’ so far.

‘We squander the goodwill and generosity of people in windy, sunny places – a resource that is ample but far scarcer than wind and sunlight’

Between 1998 and 2018, the proportion of Spain’s electricity production produced by wind rose from 1 percent to 19 percent, even as the country’s CO2 emissions remained roughly level.

‘Rather than saving the world, blades have merely allowed middle class Spaniards to buy microwaves and smartphones’, Hughes writes.

And this reality is known and understood by people in Sereno who, quite understandably, are unwilling to sacrifice their landscape, view and tranquillity mainly for the benefit of the already-well-off.

‘We squander the goodwill and generosity of people in windy, sunny places – a resource that is ample but far scarcer than wind and sunlight’, Hughes concludes.

Parallels are all to easy to draw with the UK where ‘net zero commitments’ sit side-by-side with airport expansion, licences for new fossil fuel projects and no credible national plan for insulating Britain’s leaky homes.

Hughes’ book is fascinating, highly revealing and sometimes poetic. And, in common with many of the best works on anthropology, it is also a joy to read.

But how much of the rest of it is relevant to the UK context?

I suspect a great deal.

Wind (offshore and onshore) currently generates between a fifth and a quarter of the UK’s electrical energy.

In April, the UK government unveiled its new energy security strategy. This aims to expand offshore wind power capacity from 11.3GW in 2021 to 50GW by 2030. (A gigawatt [GW] is a billion watts or the amount of energy needed to power 125 million eight-watt LED light bulbs – equivalent in brightness to old-style 60W incandescent bulbs.)

At the same time, the government failed to lift restrictions imposed by Conservative prime minister David Cameron in 2015 that make it almost impossible to build new onshore wind facilities in England and Wales.

After the imposition of those restrictions, only eight onshore wind farm applications for new or extended sites were submitted in England between 2016 and 2020 – a 96 percent decrease from the 237 applications submitted between 2011 and 2015.

Currently, a single individual can, in effect, veto a wind farm in their locality – and there is a bloc of over 100 Tory MPs who are vociferously opposed to expanding onshore wind.

‘We live perpetually beneath a gas ocean, heated and stirred by a star'

Moreover, according to environmentalist Mark Lynas, in the context of the current climate crisis, even the government’s target for offshore wind is only a small fraction of what’s needed. We should be aiming for 500GW of offshore wind by 2030, not 50GW. This would mean offshore wind being visible from pretty much everywhere around the coast.

In one recent opinion poll, 79 percent of Tory voters said that they favoured windfarms being installed in the UK – with even greater numbers of Labour and Lib Dem voters backing the technology.

Two-thirds of those polled said they would be happy for a windfarm to be built near them.

Even so, such polls should be taken with a pinch of salt. It’s one thing to back something in the abstract, perhaps something very different when it actually arrives on your doorstep.

Above all, Hughes’ book strikes me as a call for artists and other cultural workers to join in the coming struggles over renewable energy, which – as the case of Spain illustrates – will be won as much by the powers of art and imagination as by technology.

‘We live perpetually beneath a gas ocean, heated and stirred by a star’, Hughes writes. ‘Look up and think big.’