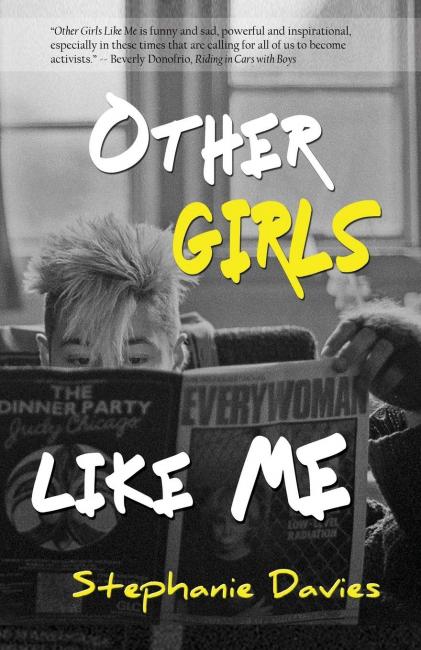 By contrast, Stephanie Davies grew up in an idyllic Hampshire village, and was in her early twenties before she decided to end a conventional heterosexual life and join the Peace Camp.

Unlike Righteous Anger, which includes timelines for both Juley’s life and world events, Other Girls Like Me is scant on dates. It reads more like a novel than a memoir, with chapters named after songs from the 1980s.

Reading between the lines, Stephanie must have visited the camp with her mother in December 1981 and returned the following year with two of her co-workers from Wigan Women’s Aid. During this short stay, she was one of a group of women who broke in to the US nuclear missile base and were caught by soldiers who threatened to rape them.

This horrific incident and the resulting court case don’t deter Stephanie and she soon leaves her controlling boyfriend and spends the next 18 months living at Greenham where she forms a relationship with a non-monogamous (and controlling) female musician.

While Stephanie’s experiences at Greenham are a great read and a valuable account of her time at the Peace Camp, the core of the book is her relationship with patriarchy.

Her father is a successful headmaster of a secondary school. He speaks openly and enthusiastically to his daughter about politics but won’t let her play football (which she loves) or go camping.

When Stephanie is 13, her father tells her that his best friend will be watching her because: ‘He wants to know if, now that you’re a young woman, you’ve turned out the way he expected.’

When she is 15, Stephanie is sexually assaulted by one of the older male teachers at the school: ‘I was ashamed and disgusted and I told no-one, though I saw Mr. Floyd, the PE teacher who wouldn’t sign my petition, watching and smirking. I didn’t even tell my father, who surely had the power to sack Mr. Mandell. But would he?’

It is no great surprise that Stephanie finds herself in relationships with controlling partners but, through the Peace Camp, the friendships she makes there, and the legal skills she learns from defending herself in court, she learns to deal with her father’s death and build a life as a writer and LGBTQ+ activist.

There will never be too many Greenham Common memoirs – the Peace Camp ran for nearly 20 years. Another 20 years on, these personal accounts are valuable reflections on one of the world’s longest and most effective anti-war campaigns – and a reminder of the victories that women have achieved in the battle for equality.