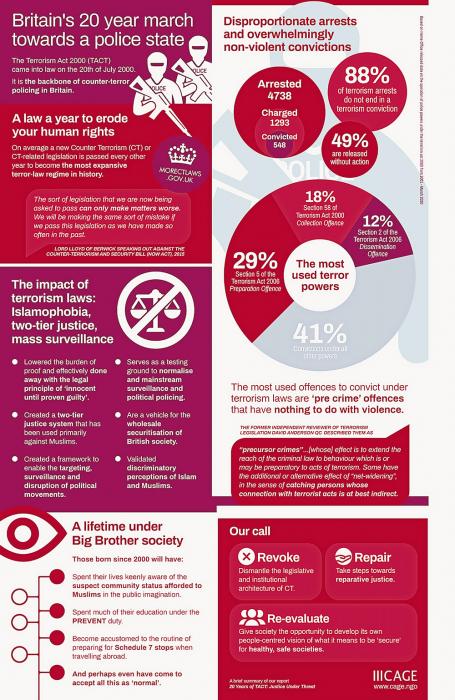 Over the last 20 years since the introduction of the Terrorism Act 2000 (TACT), the British counter-terrorism (CT) regime has expanded to historically-unprecedented levels.

Successive, almost annual reviews of legislation within a racist, fear-based environment have resulted in a near-limitless policing apparatus, and a two-tier justice system that undermines democratic governance.

Only 11.6 percent of ‘terror arrests’ have resulted in terrorist convictions since the TACT statistics were recorded.

Almost half of all arrestees are released without action, while just over a quarter of arrestees are charged with a terror offence.
Terror arrests, especially raids, serve as a visible indicator that ‘something is being done’.

But these statistics show that the reality away from the headlines often falls short of the impression created by them.

As of March 2020, 77 percent of individuals in prison custody for terror offences are Muslim.

Furthermore, the way that the spectre of ‘extremist’/’terrorist’ prisoners is mobilised politically – with the idea that prisons are ‘breeding grounds for terror’ – has also justified the expansion of the prison regime and validated discriminatory perceptions of Islam and Muslims.

The stigma and fearmongering attached to Muslim-majority terror offenders has served to validate the hard arm of policing, and undermine the very notion of rehabilitation. This is something we are seeing with recent laws such as the Terrorist Offenders (Restriction of Early Release) Act 2020, and the Counter-Terrorism and Sentencing Bill currently under consideration – which herald a punitive turn that favours keeping individuals trapped in a cycle of prison and surveillance indefinitely.

These are offences relating to possession of banned material, or preparatory activity, but which place the burden of proof on the defendant who often faces a near-impossible environment, such as being faced with secret evidence and a judiciary that is in thrall to a discriminatory and compromised executive.

This is the executive summary from 20 Years of TACT: Justice Under Threat, a report published in July by the human rights group CAGE (formerly Cageprisoners): www.cage.ngo