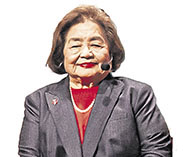 The Treaty on the Prohibition of Nuclear Weapons has entered into force! This truly marks the beginning of the end of nuclear weapons!

When I learned that we reached our 50th ratification, I was not able to stand. I remained in my chair and put my head in my hands and I cried tears of joy.

I have committed my life to the abolition of nuclear weapons. I have nothing but gratitude for all who have worked for the success of our treaty. I have a powerful feeling of solidarity with tens of thousands of people across the world. We have made it to this point.

As I sat in my chair, I found myself speaking with the spirits of hundreds of thousands of people who lost their lives in Hiroshima and Nagasaki.

I was immediately in conversation with these beloved souls – my sister, my nephew Eiji, other dear family members, my classmates, all the children and innocent people who perished.

“I put my head in my hands and I cried tears of joy.”

I was reporting to the dead, sharing this good news first with them, because they paid the ultimate price with their precious lives.

Like many survivors, I made a vow that their deaths would not be in vain and to warn the world about the danger of nuclear weapons, to make sure that no one else suffers as we have suffered. I made a vow to work for nuclear disarmament until my last breath. And now we have reached a milestone in our decades’ long struggle – the Treaty on the Prohibition of Nuclear Weapons will become international law!

I have a tremendous sense of accomplishment and fulfilment, a sense of satisfaction and gratitude.

I know other survivors share these emotions – whether we are survivors from Hiroshima and Nagasaki; or test survivors from South Pacific island nations, Kazakhstan, Australia and Algeria; or survivors from uranium mining in Canada, the United States or the Congo.

All those who have been victimised by the barbaric behaviour of nine nations who continue to develop more horrendous weapons, prepared to repeat nuclear massacres far more devastating than the atomic bomb that levelled my home town, Hiroshima.

For the victims and survivors, this initial success with the Treaty on the Prohibition of Nuclear Weapons is tremendously uplifting.

I celebrate this moment with my brothers and sisters across the world who have been victimised, and still raise their voices, and still survive.

We also celebrate with those people across the world who recognise the ultimate evil of nuclear weapons, instruments of radioactive violence and omnicide that have kept the entire world hostage for all these 75 years.

We celebrate with the global community of anti-nuclear activists who have come together and have worked for the success of this treaty.

I am especially grateful to my dear colleagues in the International Campaign to Abolish Nuclear Weapons. ICAN laid the groundwork to collaborate across the divide of diplomacy and activism, to achieve something of profound and lasting importance.

I also want to acknowledge how moved I am that in the preamble to the treaty, hibakusha are identified by name.

This is the first time in international law that we have been so recognised.

We share this recognition with other hibakusha across the world, those who have suffered radioactive harm from nuclear testing, from uranium mining, from secret experimentation.

And furthermore, the treaty recognises that indigenous people have been disproportionately affected by the production of nuclear weapons.

We in hibakusha and indigenous communities uniquely understand that not only the use of nuclear weapons in war but also the testing and production of nuclear weapons causes death and unspeakable suffering through invisible radioactive contamination.

And here the treaty recognises that women and girls are more susceptible to the effects of radiation – that there are gendered implications to radioactive violence.

I am moved to acknowledge the positive obligations of the treaty as well – such as victims assistance and environmental remediation which will be a hallmark for taking responsibility for the inter-generational effects of radiation.

“While this is a time to celebrate, it is not a time for us to relax.”

It is vitally important that we all understand that the nuclear age will continue far beyond the nuclear weapon age. We will need to contain and care for radioactive materials into the far future.

But for now, in this joyous present moment, we can rejoice in making our first move.

I cannot truly express with words my feelings of overwhelming gratitude.

In spite of that and more, we have made it to this point – nuclear weapons are now illegal under international law!

Nuclear abolitionists everywhere can be incredibly encouraged and empowered by this new legal status.

Now, with greater intensity and purpose, we will push forward.

While this is a time to celebrate, it is not a time for us to relax.

The world is ever more dangerous.

Yes, we have made it to this point, but we have a long path to cover until we reach our goal of the total elimination of nuclear weapons.

It is unlikely that I will see that day. It is unlikely that any atomic bomb survivor with their own lived memories will bear witness on that day but with the Treaty on the Prohibition of Nuclear Weapons, we can be certain that that beautiful day will dawn.

And on that day, we hibakusha, test survivors, indigenous people and others, victim to the intergenerational cruelty of radioactive poison, will be remembered and someone alive at present will report to us.

Because of our work, our solidarity, our love for this world, we will be a part of a much greater celebration in spirit, when nuclear disarmament will be achieved as part of a greater movement that encompasses peace, justice, equality and compassion for all.

The Treaty on the Prohibition of Nuclear Weapons has opened a new door, wide.

Passing through it we begin a new chapter in our struggle – with a mighty embrace of gratitude from those we have lost, and a heartfelt welcome from those who are yet to come.

The beginning of the end of nuclear weapons has arrived!

Let us step through the doorway now!

This statement first appeared on the ICAN website: www.icanw.org

Setsuko Thurlow (born Nakamura) was 13 years old, on her first day of duty as a conscript, set to decode enemy messages at a military headquarters in the suburbs of Hiroshima, when a US atomic bomb destroyed her city on 6 August 1945. She was buried in the collapsed building and helped to escape by a soldier. Almost all of Setsuko’s classmates in the same room died, many burned alive. She then had to walk through a devastated city filled with thousands of dead and dying people. Eight members of Setsuko’s family died during or soon after the nuclear attack. Her older sister, Ayako, and Ayako’s son, Eiji, both survived a few days – ‘horribly burned, blackened and swollen beyond recognition’. They were identified by Ayako’s unique hair-pin and by her voice. Receiving the Nobel Peace Prize on behalf of ICAN in 2017, Setsuko said: ‘Whenever I remember Hiroshima, the first image that comes to mind is of my four-year-old nephew, Eiji – his little body transformed into an unrecognisable melted chunk of flesh. He kept begging for water in a faint voice until his death released him from agony. To me, he came to represent all the innocent children of the world, threatened as they are at this very moment by nuclear weapons. Every second of every day, nuclear weapons endanger everyone we love and everything we hold dear. We must not tolerate this insanity any longer.’ Setsuko has been speaking up against nuclear weapons, and telling her story, since 1954. Setsuko spoke at the launch of ICAN in 2007, and was a key figure in all the conferences that led up to the 2017 Treaty on the Prohibition of Nuclear Weapons.