Mike Davis, The Monster Enters: COVID-19, Avian Flu and the Plagues of Capitalism 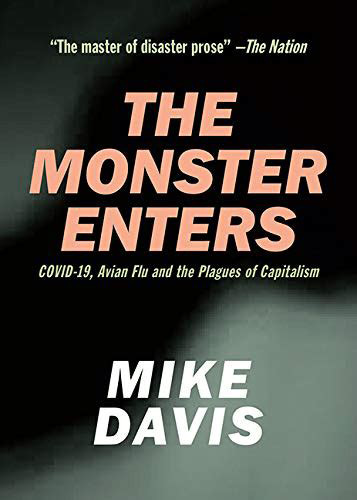 In this expanded edition of his 2005 book The Monster at Our Door (the ‘monster’ being a deadly influenza pandemic), renowned historian Mike Davis critically surveys the scientific roots of COVID-19, as well as the political, economic, social and ecological conditions that affected its rise.

From the outset, Davis highlights what few governments and corporate media commentators dare admit: that COVID-19 and its various predecessors (including SARS-CoV-1 and MERS-CoV), as well as the scores of influenza viruses that have plagued the globe over the past few decades, are the direct result of globalised capitalism.

The factors are many, but they include:

Demonstrating an impressive command of the science, Davis’s writing is both gripping and accessible as he examines the role of these different elements in the evolution and spread of the deadly H5N1 influenza that made the miraculous ‘species jump’ from waterfowl to humans in 1997.

Documenting numerous outbreaks throughout the late 1990s and early 2000s, Davis shows how – despite decades of warnings from the scientific community – leading governments have not only failed to address the lack of new antibiotics and vaccines, but also failed to invest sufficiently in public-health infrastructures, leaving hospitals overwhelmed and medical personnel underprepared, under-resourced and understaffed.

What’s most alarming about this book is that most of it was written back in 2005, yet all of it rings horrifyingly true today.

In the updated introduction, Davis outlines how consecutive US administrations (from Clinton to Obama) simply ‘looked the other way’ as local health departments lost funding and hospital capacity eroded.

Unsurprisingly, Trump comes off the worst.

Rich countries, Davis notes, have had decades – ‘a unique advance warning in the history of disease’ – to build a ‘network of global defenses against an impending pandemic’, but they’ve failed miserably.

He cites Klaus Stohr, former head of the World Health Organisation’s global influenza programme, who said in 2004: ‘One of the most difficult things to explain to the public after a pandemic would be why we weren’t prepared, because there have been enough warnings.’

There cannot be a book in 2020 that screams ‘I told you so!’ more loudly than this one. Yet if you’re looking for assurance that our governments will step up in the future then you won’t find it here.

‘Permanent bio-protection against these new plagues’, Davis asserts, would require huge investment in public health and ‘revolutionary reforms in agriculture and urban living that no large capitalist or state-capitalist country would ever willingly undertake’.