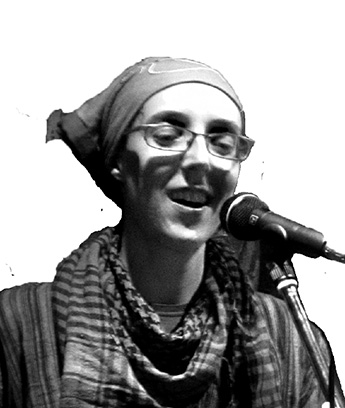 Penny Stone reminds us that we hear music and see human faces.

As global citizens, we want to change the reality on the ground for people in our immediate communities and those around the world.

We want to stop the pain, level the inequalities and stop the bombs from falling. And, so often, we can’t do that, or we can’t do it quickly enough. So often, we aren’t able to physically intervene to make things better on the ground for our neighbours.

Of course, there is a time for direct action. When we have energy, time and organisation to chain ourselves to trees and shut down military facilities and oil companies; to disrupt public space and pose challenging questions and creative alternatives; to stand beside people who need support, wherever they are and whoever they are.

And there is always a time to write letters to our elected representatives and use the democratic processes available to us.

But, sometimes, what we need is basic human connection.

There is so much information flowing in for those of us who are connected to the internet, the TV and the radio, that the state of the world can feel totally overwhelming.

Trying to understand the human meaning when hearing about massive numbers of people who are injured or dying or living in abject poverty in our world can be just too big to fathom.

How can we keep opening our hearts to the pain of people living in Syria, in the DRC, in Yemen?

For me part of the way to keep afloat and connected is through music.

Beautiful music. Energetic music. Music that soothes the heart and helps us to let the tears flow.

Music that speaks of love and heartbreak. Music that sings about mountains and forests of one place can be connected with by people who have never seen those lands before.

When we sing about the hills in another place, maybe we remember times that we have climbed hills and mountains closer to home or when travelling elsewhere. We connect with the beauty of the land and with sensory memories connected with those places.

When we sing a love song written in a different time or place, we mirror onto that story our own experiences of love and loss.

So, when we sing a song together, it becomes that little bit more difficult to disconnect from the humanness of another person, of another people.

In November, two friends and I ran an online Armenian song workshop that came into being because we wanted to connect people from all over the world with Armenia.

We didn’t want to get together to talk about the war in Artsakh or get to grips with the complex history of it, but we wanted to invite people to meet an Armenian person through song. And I wanted my Armenian friends to know that there are people all around the world who have their eyes open and can see what is happening.

When a people have survived an unacknowledged genocide, as the Armenians have, the fear of not being seen by people in the international community is the fear that another genocide could happen.

People zoomed in to show solidarity. People came to learn something new from a musical tradition that they weren’t familiar with. People came to find international connection, perhaps not knowing much about Armenia.

And everyone who sang with us for that hour now hears something more human, more complex and more beautiful when they hear ‘Armenia’ on the news. Not just numbers and abstract words about conflict.

Just making music isn’t enough on its own, but it’s part of something much bigger, and lays some of the groundwork for other branches of our activism.

As Pete Seeger said: ‘a good song reminds us what we’re fighting for’. And if we learn a beautiful song from a person in a country we have never been to, then every time we hear that place mentioned in the news, we hear that song; we connect with the humanness understood in the sharing of that song.

And while that can make the pain of war and inequality feel even more unbearable, it can also make it feel more possible that human beings can overcome it – because in so many ways we have the same needs and desires.

As Jo Cox MP said so eloquently: ‘We… have far more in common with each other than things that divide us’.

If you would like to watch a recording of the Armenian song workshop and learn two songs from Armenia, you can watch it here:
www.tinyurl.com/peacenews3476