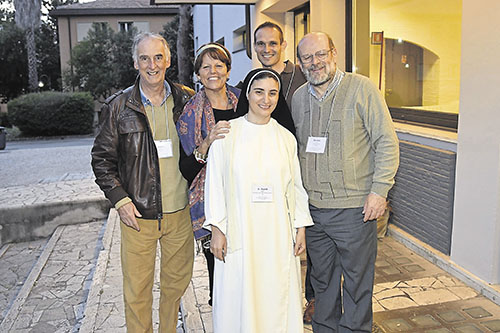 Study sessions, days of action and a new book - an update from Pat Gaffney

I am a cup-half-full sort of person – not, I hope, naïve – but encouraged by the hope-filled actions around me.

In the last year, this includes the strengthening of the Black Lives Matter movement, the persistence of the Campaign Against Arms Trade in continuing their legal challenge to UK weapons sales to Saudi Arabia, the long-awaited coming into force of the Treaty on the Prohibition of Nuclear Weapons.

Also in October, we had another hope-filled action. Pope Francis declared that it is no longer possible to speak of a ‘just war’.

Two years ago, I wrote in these pages about an ongoing project of Pax Christi International – the Catholic Nonviolence Initiative (CNI) – which is a process of conversations and research, with the Vatican and a global peace community, to deepen our understanding and our commitment to active nonviolence. (See PN 2622 – 2623.)

While CNI has not achieved our initial objective, for the Catholic church to write a teaching document on nonviolence, I think we have perhaps done more to grow and root an understanding of active nonviolence in communities around the world.

“Pope Francis declared that it is no longer possible to speak of a ‘just war’.”

It is a little like running a relay race. Teams of people – theologians, peace activists, community workers, academics – dotted around a track, each carry a baton of experience and knowledge of the power of nonviolence, and pass these on until they merge to create a whole picture.
The work has expanded since 2018 and includes: the launch of our second book, Advancing Nonviolence and Just Peace in the Church and the World; the first annual ‘Catholic Nonviolence Days of Action’; the development of study guides on ‘Making Nonviolence a Way of Life’; and regular contributions to the Vatican’s COVID-19 commission on how security might be reframed post-COVID.

The fruits of working groups, conferences and commissioned essays, involving more than 100 contributors, were honed by a skilful team of editors into Advancing Nonviolence and Just Peace, published in October.

Acknowledging some of the tragic failures of the church, it moves to offer examples of faith communities making connections between poverty, violence, the destruction of the environment and developing on-the-ground nonviolent responses.

Commenting on the work, Tiffany Easthom, executive director of Nonviolent Peaceforce, says: ‘Along with providing philosophical and theological foundations… the book provides practical examples of transition, like unarmed civilian protection. Active, compassionate and co-operative nonviolence is essential for our future survival. This book helps chart that path.’

I particularly value the very practical sections on integrating nonviolence into the life of the Catholic community, what could be seen as a checklist of outcomes. Here are just a few.

Pope Francis, some years ago, urged that the church be a ‘field hospital’ in an unjust and violent world. This needs people well-trained in trauma healing, nonviolent resistance, diplomacy, education and more, who see that nonviolence can inform and sustain every aspect of this work.

Between 2018–2020, a group called ‘the People of God’ met to plan projects for grass-roots communities that would, among other things, lead to a celebration of nonviolence.

As the name of the group implies, this was a ‘bottom-up’ rather than institutional process, with participants from the Central African Republic, Germany, Kenya, Korea, Mexico, Palestine and the US.

A course and survey entitled ‘Making Active Nonviolence a Way of Life in the Church and the World’ was created. It drew on the texts of the 2017 World Peace Message, ‘Nonviolence a Style of Politics for Peace’.

The five units in the course included these themes: ‘Cultivating Nonviolence’, ‘Seeing Violence in our World Today’, ‘Discerning and Judging based on the Good News of Jesus’, and ‘Acting with a Force More Powerful than Violence’.

The group decided to support the first Catholic Nonviolence Days of Action – which run between 21 September (Peace Day) to 2 October (Day of Nonviolence). It built a toolkit around the themes of: ‘Prayer Resources’, ‘Acts of Public Witness’, ‘Nonviolence as a Way of Life’, ‘Creating a Nonviolent Parish’, and ‘Celebrating Nonviolent Heroes’.

The rich experiences of our group elicited films, videos, stories, prayers, discussion ideas and models of actions that were woven into the framework. Aware that no person or group could do everything, we hoped that our ‘pick and mix’ approach would allow everyone to do something!

In England and Wales, Pax Christi offered the ‘Making Active Nonviolence’ course twice between September and October. Using Zoom online meetings, we had a core of around 45 people over five one-hour sessions.

The secret was to keep things short with a clear focus using PowerPoint and to allow substantial discussion time in break-out groups.
Zoom also allowed global outreach, with participants joining from Brazil, Palestine, Scotland, Uruguay and the US, as well as England and Wales.

‘I had assumed nonviolence was a very minority interest in the church – and it is – but it was good to hear the enthusiasm and activism of so many Catholics’; and ‘I have always viewed nonviolence through a political and philosophical stance, this opened up the spiritual connection and how rooted in the gospel the message is’.

Those taking part were asked to become ‘multipliers’: to offer the course themselves. Several have accepted the challenge. Over the weeks, we created a community, forging strong people-to-people connections that we hope to maintain.

We believe that active nonviolence — a spirituality, a way of life and a program of action — is key to this global shift.

The Nonviolence Days of Action were marked by Pax Christi sections and partners globally. Groups in Mexico ran video conferences among young people on the theme ‘Between the Coronavirus and the New Morality’, with sessions on gender and feminisms, the environment and sustainability, education, research and the culture of peace.

In Austria, Christian and Muslim theologians came together for a conference on ‘Islam and Nonviolence’.

The theme ‘Building Bridges’ was used in Flanders in Belgium and included talks on working with prisoners and refugees as well as a 30km cycle ride. En route, cyclists stopped to reflect on the peacemaking aspect of bridge-building, past and present.

In Osnabrück, Germany, a group created an exhibition in the town centre entitled ‘Peacemakers Walking the Paths of Nonviolence’, to challenge the idea that violence can bring security.

Seven nonviolent peacemakers were chosen to represent approaches and traditions of nonviolence, including archbishop Oscar Romero from El Salvador; Hildegard Goss-Mayr and Jean Goss, teachers and trainers of nonviolence in the Philippines and Latin America; and Gandhi and Abdul Ghaffar Khan in South Asia.

In the US, Pax Christi ran webinars on institutional violence in the USA as well as training workshops in preparation for the US election. In Italy, religious missionary congregations created resources on ‘Cultivating a Life of Respect and Nonviolence within Creation’.

In summer 2020, we wrote an appeal to pope Francis suggesting that response to the pandemic requires a fundamental shift from the ‘unjust normal’ of systemic and structural violence to a culture of solidarity that seeks the fullness of life for all.

We believe that active nonviolence – a spirituality, a way of life and a program of action – is key to this global shift. So, we keep on rolling!

Pat Gaffney is a member of the CNI executive committee.