The success of home ed 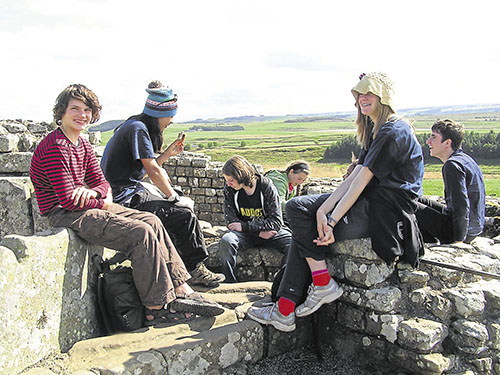 It’s been a crazy time as this disease and the government’s response to it has created so much misery: job loses, debt, isolation, rise of domestic violence, mental health breakdown and the stress of living in fear for your own life and your loved ones’ lives.

But there have been some unintended benefits... the silence in the city except for birdsong, meeting your neighbours and sometimes helping them, the change from ‘because I’m worth it!’ to ‘let’s help others’ and ‘aren’t we lucky’.

One of the biggest changes was the situation of every family ‘home schooling’ with the closure of schools.

“The schooling system was making sure that it was in control.”

It is really interesting to be thrust into the limelight after being on the far sidelines (or maybe on the edge of the cliff) for so long. On the one hand, everyone is doing it and some will get it. On the other hand, the negativity around it in the press could mean that everyone involved, young and old, may come to associate home education with agony, without understanding what it is.

I was asked to write a piece for a magazine in March 2020. I have printed the whole piece here (see below) to show the potential I felt for the situation at that time.

None of it was published. An inane sentence was put into the article attributed to me. That was a clue to the future....

Looking back now, what did happen over the spring and summer of 2020?

The schooling system was making sure that it was in control of the curriculum and the style of education even if education happened outside school premises. This is what happened in March 2020. ‘Home schooling’ was being presented during this period as a trial for all concerned.

However, while many suffered through the shut-in doing what the teacher told them, many, for one reason or another, did not do this.

There were glimpses on the radio and in the press of people saying ‘We didn’t do what the school gave us’ for varying reasons and yet they had a great time and learned loads.

At one fell swoop, the principles of home education were presented in reality, physically and without rhetoric, to more people than a long-term home educator such as myself could ever have imagined!

It has dawned on many that school is not the only place to learn nor possibly the best place, that being with your children is a great privilege, and that learning together, doing things, is actually enjoyable and life-enhancing.

I have no way of knowing how many parents swelled the ranks of home educators in September 2020 but I know three families who say they now have the confidence to do it for real, having had this six months’ experience. Calls from new families to London’s Otherwise Club of home educators have been unprecedented.

Whether this experience translates into hundreds or thousands leaving school is not known.

The next time home education is mentioned in the press, some will continue to talk about the agony of parents trying to do the job of teachers. Others will think back wistfully and remember those few precious months when things slowed down, they got to know the other members of their family in a meaningful way and have deeper experiences together.

The government have not gone back to closing schools during the second shut-in. Why is this?

If we are in a pandemic, then why are children between 10 and 18, who seem to be just as likely to spread the disease as adults, allowed to meet together?? Could it be that parents cannot work as usual if the children are at home or that the disruption to the syllabus presentation is paramount?

Or could a small portion of it be a worry by the government that some people realised that being home with their children was an honour and humbling, that parents were better than they thought at helping their children to be creative and active and everyone learned loads with far less stress and anxiety?

It is my contention that the success of home education during 2020 has frightened the government into once again trying to change the legal position so that the state takes the responsibility for persons under the age of 18 away from their parents.

A parliamentary select committee has once again asked for evidence about home education – despite the fact that, only a year ago, we responded to a consultation on this very topic (with very similar questions).

The government has not yet published its response to the 2019 consultation. Instead, we are being asked again: should we be inspected, made to register with local authorities and be monitored by them?

The questions again betray the real reasons for these ‘consultations’. They are not about the best education for children and young people but about a fear of loss of control by the state.

My two children, now 31 and 37, never went to school. We spent their childhood together, learning, playing and doing projects. I know hundreds of children through my work with the Otherwise Club who did not go to school or follow a curriculum and who are all valued members of society now.

For example, one young friend did not learn to read until they were 11 years old but went on to work in publishing. Another learned to read by themselves at four-and-a-half and is now a high-level civil servant. Another friend went to Oxford university to study law – without any GCSEs or A-levels.

Just a small snapshot to show that home education does not stop you from doing well in the ‘real world’.

My suggestion to all you budding home educators is, firstly, trust your child... education is about supporting them in their journey.

Who knows what young people need for the jobs of the future? To best prepare for an unknown future, we need curious, creative, flexible people with a sense of themselves.

The hardest question is: ‘Who do you want to be?’ Once someone knows this, we can help them find out how to get there.

Protect them by listening to them, and by working alongside them with trust that they know what they need and that their thoughts are valuable.

You didn’t have to teach them to walk and talk. You trusted they would learn and mostly they did. They wanted to join in and be a part of the world.

As they get older, they bring their own views to the world. Enjoy these. There are no right answers here. Let them flourish.
Secondly, do things together.... People of all ages learn all the time. You do not need a curriculum, textbooks, experts or timetables.

You only need to love your children and young people and want to spend time with them, doing things together that everyone enjoys.

You are part of the learning and need to be included. So do things that you are interested in too!

This is a wonderful opportunity to spend time with the children and young people in your family, to get to know them and share their journey and their dreams.

This is a time to see how capable, interesting and individual they are.

This is a time to realise what you are missing when they go off to school every day. They are our future. Cherish this time together. And remember, when all this is over, they do not have to go back to school....

Leslie Barson is the founder and co-ordinator of the Otherwise Club, a home education group in North West London(which is nearly 28 years old).