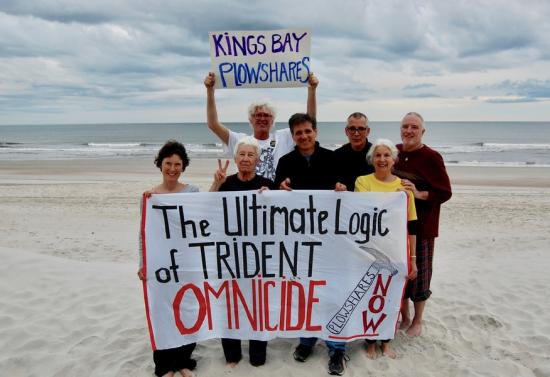 Six of the Kings Bay 7 have received their sentences – between one and three years in prison – for their disarmament action at a Trident base in Georgia, USA, in 2018. One will be sentenced in December.

The Ploughshares activists, five of them from Catholic Worker groups around the US, carried hammers and baby bottles of their own blood to three locations on the Kings Bay submarine base.

The seven Christians attempted to symbolically convert US weapons of mass destruction and to fulfil the biblical prophecy to ‘beat swords into ploughshares’. (PN 2618 – 2619)

In October 2019, the activists were found guilty of trespass, destruction of property on a naval station, depredation of government property, and conspiracy. They faced up to 10 years in prison. (PN 2636 – 2637)

In addition to their prison sentences, all six processed so far have been given three years probation and have been ordered to (collectively) pay restitution of $33,501 to the US navy.

On 16 October, Patrick O’Neill was sentenced to 14 months in prison.

On 12 November, two of the seven were sentenced: Carmen Trotta to 14 months and Clare Grady to one year and one day.

On 13 November, Martha Hennessy was ordered to serve 10 months’ incarceration.

All four had been out on bail, electronically tagged, for over a year before sentencing.

Father Steve Kelly, another Kings Bay activist, had been sentenced on 15 October – to 33 months in prison. He was released immediately, as he had already spent 30 months in prison, and had accumulated enough time off for good behaviour.

Much earlier, on 8 June, 80-year-old Elizabeth McAlister was also sentenced to time served – after 17 months in Georgia county jails following the action.

The seventh of the activists, Mark Colville, has been insisting on appearing before the judge in person, which in these COVID times has delayed matters. He will be sentenced on 18 December either in person or virtually.

Supporters have attended some of the sentencing hearings by telephone using a court freephone number.

There was a virtual Festival of Hope for supporters on 8 November, over Zoom.

Speakers included Native American activist Leona Morgan, who is Diné and who grew up on the Navajo Nation. She co-founded Diné No Nukes to address uranium mining as part of the nuclear fuel cycle.

Prison addresses will be released in January — though it is very difficult to write to them from the UK. To read the activists’ powerful sentencing statements, see a recording of the Festival of Hope and much more: www.kingsbayplowshares7.org