The ban is here 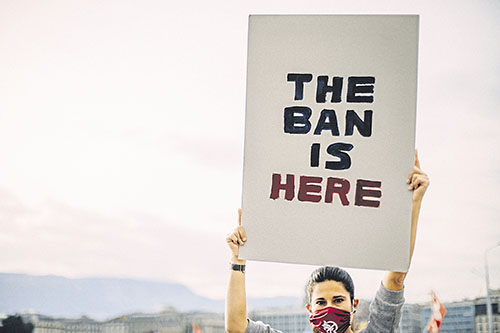 On 24 October, Honduras ratified the UN Treaty on the Prohibition of Nuclear Weapons (TPNW), becoming the 50th state to signal its binding agreement with the treaty.

Passing the 50-ratifications threshold means that the TPNW will now actually ‘enter into force’ – become law – on 22 January.

Unlike other nuclear treaties, the TPNW specifically mentions the disproportionate impact on women, the damage caused to the environment we all depend on and the wholesale disregard for indigenous people that have suffered the effects of nuclear weapons use and tests.

The ‘Reaching Critical Will’ programme of the Women’s International League for Peace and Freedom (WILPF) played a huge part in the work of the International Campaign Against Nuclear Weapons (ICAN) in bringing diplomats, academics and survivors together for the unstoppable change that will eventually lead to nuclear weapons elimination.

In July 2017, following international concerns about the catastrophic humanitarian consequences of any use of nuclear weapons, a majority of UN states adopted the first treaty imposing a total ban on nuclear weapons.

The TPNW covers all aspects of nuclear weapons, including use and threat of use, development, sharing and offering assistance to another state that is engaging in these activities.

The impact of the treaty is fully understood by the nine nuclear-armed states – China, France, India, Israel, North Korea, Pakistan, Russia, the United Kingdom and the United States – which is why they refused to participate, and applied huge pressure on other UN member states to join their boycott.

Without even being launched, nuclear weapons actually heighten all of these risks and feed a dangerous culture of structural racist violence.

In advance of the TPNW negotiations, the US wrote to NATO states and asked them not to participate. They expected the treaty to place difficult limitations on US nuclear weapons strategy.

In the UK, the government refused any Scottish representation at the UN.

Just before the final TPNW ratification, Associated Press broke the story of how the US was pressurising countries to withdraw ratifications.

None of these actions indicates that the treaty is ineffective.

Will the TPNW bind states that do not join? Even without discussing the divestment currently haemorrhaging finance for nuclear weapons, the impact will affect all states.

UN treaties arise from a shared understanding of what is acceptable. The US still has not signed or ratified the 1997 Mine Ban Treaty, but no longer manufactures or uses antipersonnel landmines.

The countries who have ratified the TPNW will be bound by its prohibitions and obligations from 22 January. Watch it grow!

Why not hold your own event on 22 January? In the US, a coalition of peace groups is calling for a host of actions. These might involve banners or posters; they might be at financial institutions or universities involved in nuclear weapons. More info: www.peacenews.info; www.nukeresister.org; www.ican.org