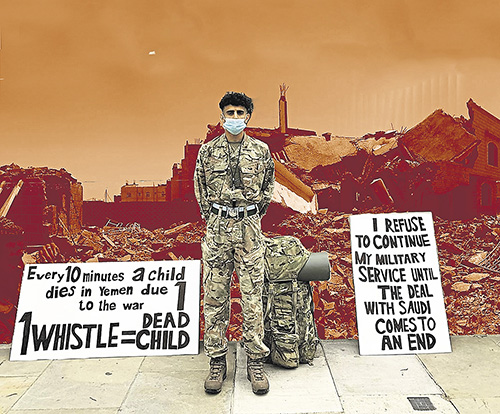 A lance corporal in a British army signal regiment has been arrested after staging a one-person protest opposite Downing Street against British support for Saudi Arabia’s bombing of Yemen.

In a video recorded before his 24 August protest, Ahmed al-Babati, who was born in Yemen, said: ‘I joined the army in 2017 and took an oath to protect and serve this country, not to be part of a corrupt government that continues to arm and support terrorism… I’d rather sleep peacefully in a cell than stay silent for a pay cheque.’

According to Campaign Against Arms Trade (CAAT), the UK has licensed £5.3bn-worth of arms to the Saudi regime since the bombing of Yemen began in March 2015.

‘In reality’, writes CAAT, ‘the figures are likely to be a great deal higher, with most bombs and missiles being licensed via the opaque and secretive Open Licence system.’

Al-Babati stood in his uniform beside a home-made sign saying: ‘Every 10 minutes a child dies in Yemen due to the war. One whistle = one child’ (see above). He blew a whistle every 10 minutes until he was detained by military police.

Britain’s biggest arms dealer, BAE Systems, has made £15bn in revenue from services and sales to Saudi Arabia since 2015. In 2019, a BAE employee told Channel 4’s Dispatches: ‘If we weren’t there, in 7 to 14 days there wouldn’t be a jet in the sky.’

In June 2019, the court of appeal ordered the UK government not to approve any new licences to Saudi Arabia until it had completed a review ordered by the court (see PN 2632).

On 7 July 2020, the government announced that it would start granting new licences again for arms to Saudi Arabia. It claimed that violations of international law by Saudi forces in Yemen were merely ‘isolated incidents’ (see PN 2644 – 2645).

Ex-soldier Joe Glenton, who himself spent time in military prison for objecting to the so-called ‘War on Terror’, told Declassified UK: ‘Because [al-Babati’s] protest was very public I suspect they will want to give him more than a slap on the wrist.’

Over 6,000 people have already signed a petition set up by Stop the War supporting al-Babati’s stand ‘because we believe that the armed forces should not be pursuing aggressive wars abroad’ and urging ‘that no disciplinary action is taken against [his] stand of conscience’.