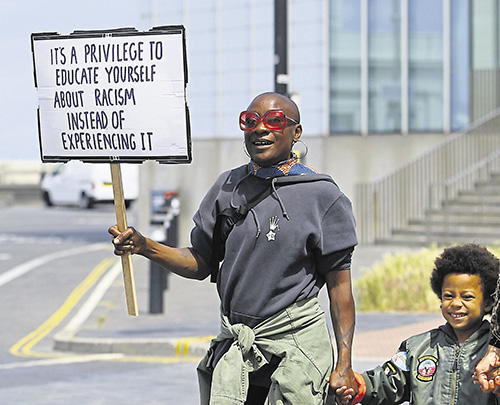 Since George Floyd, an unarmed African-American man, was killed by a white police officer in Minnesota in the US on 25 May, there has been a vast, intense wave of anti-racist protests that has shaken the world.

In the first half of September, we held an anonymous online survey to see what impact, if any, the Black Lives Matter (BLM) movement has had on the British peace movement. 117 people completed it in the fortnight it was open. We were surprised and grateful for how honest people were.

There were firm BLM supporters and people who are hostile – as well as people who remain unsure what to do.

Of the 103 people who self-identified as white, several described their reaction to these events with words like ‘despair’, ‘horrified’, ‘shocked’, and ‘shaken to the core’.

Another said: ‘This is a huge awakening for me. I am coming to terms with my family history of dominating, military and colonisation and my resulting upbringing and am working towards a different way of being in the world. I am unlearning a lot and listening to others.’

“I thought it was good to be colour-blind but now I see that that in itself is a form of privilege.”

Some changes were instant and surprising: ‘I thought there were virtually no black people living in my small town but now I see them every day. I thought it was good to be colour-blind but now I see that that in itself is a form of privilege.’

Lots of people talked about being motivated to learn more about race and racism after the killing of George Floyd.

Two people mentioned reading Reni Eddo Lodge’s Why I’m No Longer Talking to White People About Race. Two others pointed to Robin Diangelo’s White Fragility: Why It’s So Hard for White People to Talk About Racism.

One person said they had set up a book group to read Layla Saad’s Me and White Supremacy: How to Recognise Your Privilege, Combat Racism and Change the World.

What did you do?

Here are some of the things people reported doing after George Floyd’s death.

Apart from attending or organising – or co-organising – BLM solidarity events (one ‘on our street, suggested by a fellow resident’), people said they had:

Interestingly, only one person mentioned financial support for BLM protesters – they sent a donation to a legal defence fund in Missouri.

What did people say they were going to do in the future?

One person wrote: ‘I and my friends are elderly and in different groups but we’ve agreed we would go on a protest march.’

A few people talked about what they could do immediately for people of colour they knew. For example, giving more support to ‘a Syrian family new to our town’ – ‘they are a delight to see again after lockdown’.

Another said: ‘We will have an eminent black speaker at our event for the first time.’ Someone else said that, at their recent online event to explore militarism, one of the three speakers was a Black Lives Matter activist discussing the links between militarism and racism.

Another person told a story about challenging their manager and insisting on a black speaker at an event they were organising: ‘I wanted to do this because, while listening to what black people want, someone said something like: “If you know a black person with appropriate credentials and you are in a position to give them more prominence... do!”’

Several white people talked about making connections with groups which were mainly made up of people of colour, including a Quaker meeting contacting local black churches, and a peace group reaching out to the local BLM support group.

"Our current membership leaflet has a photo of four white people on the cover!"

A peace NGO person said: ‘We are also more consciously attempting to have greater diversity in the people we invite to speak, write and organise with us.’

Some people said that the BLM protests had changed their peace campaigning priorities.

One had ‘an increased focus on uranium mining’. Another said their anti-nuclear group was increasingly conscious of the different way that nuclear weapons had affected different racial groups, including the effect of nuclear tests and uranium mining on indigenous peoples.

Another group said the BLM anti-police brutality protests had ‘made us focus more on the sale of “crowd control equipment” and other repressive weapons’.

Some peace organisations said that, after the BLM uprising, they were being ‘more race-aware’ in their work, including in the images they choose for publicity material: ‘Our current membership leaflet has a photo of four white people on the cover!’

Another group said that it was looking at its HR policies and how they were put into practice. Another planned to roll out training for staff and volunteers.

Three groups didn’t have specific plans, but wanted to do something on this issue. While they had similar intentions, they used different language:

Someone else said that, while they didn’t want to alienate some of their group’s longstanding supporters, they would ‘really like to see race issues and decolonial work become a core part of the organisation’s message’.

Another person said that their organisation had set up a working group around white supremacy. Another said that their church social justice group was holding three-part anti-racism sessions (‘Listen, Discern, Act’).

At the level of individual action, one person wrote: ‘I also make sure I speak up rather than ignore racist remarks. “Evil flourishes when good people (men) do nothing.”’

Another person told us: ‘I’ve put a “Black Lives Matter” poster in the front window of our house.’ An action many of us could take.

A longer report on the PN BLM survey will be posted on our site in mid-October. This conversation will continue in our next issue – we will be seeking comments on the full survey from British peace organisations. If you would like to take part in a follow-up survey, please email us, putting ‘BLM survey’ in the subject line: editorial [at] peacenews.info