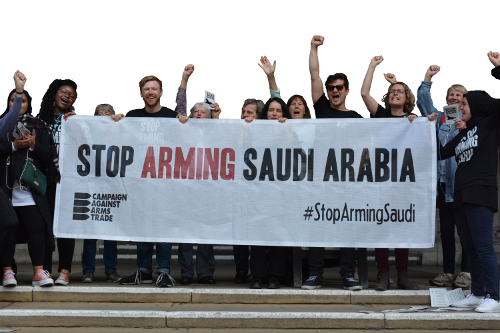 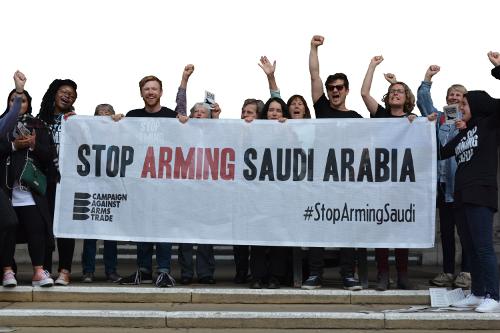 The public and press benches were absolutely full on the morning of 20 June, when the court of appeal in London ruled that the British government had acted ‘irrationally and unlawfully’ in allowing UK arms exports to Saudi Arabia for use in Yemen.

The ruling means that the government must not allow future sales to the Saudi-led forces that are at war in Yemen, and that it must review existing licences following a legally compliant process.

Although it was heard in silence, the verdict was one which would cause tremors in the foreign office and the palaces of Riyadh. It had been a long time coming, and followed a four-year-long legal process brought by Campaign Against Arms Trade.

Since March 2015, forces led by Saudi Arabia have inflicted a brutal bombardment on the people of Yemen. It is a bombing campaign that has led to terrible destruction right from the start.

In the first week of the war, Saudi forces bombed a refugee camp, killing 40 people. The atrocities have only continued since then.

Schools, hospitals and homes have been destroyed, while weddings, funerals and family gatherings have been turned into massacres.

Last August, Saudi forces bombed a school bus, killing dozens of children. It was a crime that was condemned around the world, but not even that was enough to stop the arms sales.

Despite the devastating consequences, one thing that the Saudi regime has been able to count on is the uncritical political and military support of the UK government. This support has manifested itself in arms sales, with at least £4.7 billion-worth of fighter jets, bombs and missiles having been licensed since the start of the war.

This complicity and the depth of the relationship was also apparent in the red-carpet welcome that the Saudi crown prince was given when he arrived in London last year.

While in the UK, Mohammed bin Salman enjoyed lunch with the queen, dinner with prince Charles, and photos on the steps of Downing Street. It was a major propaganda coup for one of the most brutal and abusive dictatorships in the world.

Of course there is nothing new about this support. When it comes to doing business with Saudi Arabia, governments of all political colours have followed the exact same policy: cosy relations and arms sales at any cost. This has been the policy under Conservative governments, Labour governments and the coalition governments.

That long and shameful history is one reason why the ruling was such a vital and important one. The scale of integration between the UK and Saudi militaries is far-reaching and vast. That is why the government and arms companies will do their best to fight this judgement every step of the way. This is a war which simply could not be fought without UK and US arms sales.

The decisions made in Whitehall have not only had a terrible impact in Yemen, they have also strengthened and empowered the Saudi royal family, which has enabled the continued repression of Saudi people.

This verdict is extremely important, but it’s not the end of the road. In some ways this is only the start. We must keep up the political pressure to ensure that the government review of existing sales is a thorough and robust one that ends current licences, and not the kind of whitewash that the arms companies would like it to be.

What did the appeal court ruling mean for arms sales?

Why did the court conclude that the government had acted unlawfully?

The government’s arms export legislation is very clear. It says that if there is a ‘clear risk’ that weapons ‘might’ be used in a serious violation of international humanitarian law (IHL) then an arms sale should not go ahead.

Since the start of the bombing campaign, Saudi forces have been accused of extremely consistent and serious violations of IHL.

“At least £4.7bn-worth of fighter jets, bombs and missiles having been licensed since the start of the Yemen war.”

In their judgment, the master of the rolls, sir Terence Etherton; lord justice Irwin; and lord justice Singh concluded that it was ‘irrational and therefore unlawful’ for the secretary of state for international trade to have made the export licensing decisions without making at least some assessment as to whether or not past incidents amounted to breaches of IHL and, if they did, whether measures subsequently taken meant there was no longer a ‘clear risk’ that future exports might do so.

The judges said: ‘The question whether there was an historic pattern of breaches of IHL... was a question which required to be faced.’ The court of appeal has ruled that the pattern has to be properly assessed and considered. The question of whether Saudi Arabia has breached IHL has to be answered by the government as part of the process it must take to re-evaluate existing licences.

What weapons does the UK sell to Saudi-led forces?

In reality, the figures could be a great deal higher, as most bombs and missiles are licensed via the opaque and secretive Open Licence system. This means that the value and quantities of these transfers are not published.

British weapons sold to Saudi Arabia and used in Yemen include the Typhoon jets which are flying over Yemen, as well as Paveway IV, Brimstone and Storm Shadow missiles, all of which have been linked to attacks on civilian targets in Yemen.

Is this the end of the process?

No. The government has already appealed against the verdict. Their appeal will be considered by the court in the weeks and months ahead.

If its appeal is unsuccessful then the government will also have the opportunity to apply to the supreme court.

CAAT has opposed this application.

STOP PRESS The court of appeal has allowed the government to appeal this case to the supreme court. Andrew Smith is the media co-ordinator for Campaign Against Arms Trade. For updates follow @CAATuk on Twitter or visit www.CAAT.org.uk.