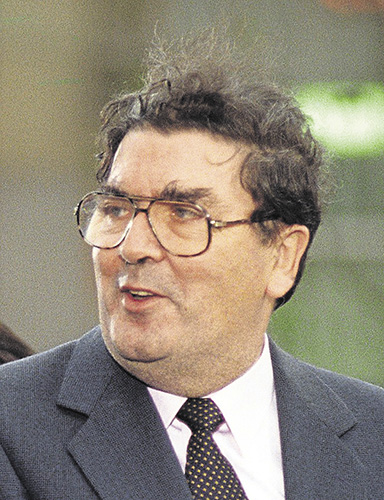 John Hume was one of four people associated with the recent conflict in Ireland to be awarded the Nobel Peace Prize. Definitely he was the most deserving.

He secured the Peace Prize for his efforts in bringing the armed conflict to an end and the subsequent signing of the Good Friday Agreement, endorsed in an all-Ireland referendum.

Ten years ago, he was voted ‘Ireland’s Greatest’ in a poll conducted by RTÉ, the Irish public broadcaster.

And in death he has been massively eulogised by the media, fellow politicians and even world leaders.

It was not always so. Those with good memories will remember the obloquy and abuse he suffered at the hands of the media in both Ireland and Britain and from such worthies as Conor Cruise O’Brien and Ruth Dudley Edwards in the ’90s.

The abuse was caused by the revelation that John Hume and Gerry Adams of Sinn Féin had been engaging in confidential talks aimed at bringing an end to the conflict.

Significantly, the Irish Independent newspaper group, which published some of the most vicious attacks, apologised following John Hume’s death.

His claim to fame rests on his contribution to creating, sustaining and promoting the Irish peace process. For John Hume, that process began in 1988 when his conversations with Gerry Adams started.

Hume–Adams went against the overwhelming consensus promoted by the Irish and British elite that the IRA had to be defeated before any agreement could be reached on what structures to establish in Northern Ireland.

So too did the Republican movement.

Sinn Féin had launched its peace strategy in the late ’80s. The IRA’s contribution to this strategy was to up its bombing operations in England, designed specifically to bring the British government to the negotiating table.

When the first IRA ceasefire did not lead to inclusive negotiations, the massive bomb in London’s Docklands was the response.

It was to John Hume’s credit that despite this and other attacks, he stood firm and remained committed to an inclusive peace process.
John Hume was good at seeing the bigger picture and gearing his political contribution to achieving it.

A United Ireland would ultimately have to be an ‘agreed’ Ireland, involving unionists as well as republicans. Hume saw that peace-making was an inclusive process and the best way to end the armed conflict would be to show that Irish unity could be achieved by political means rather than by force of arms.

By 1997, events were working in his favour. The two main blockages to the peace process, John Major and John Bruton were removed from office by their respective electorates, to be replaced by Tony Blair and Bertie Ahern. Both quickly moved the process forward and a second IRA ceasefire, the final one, was the result.

Many of the eulogies to Hume have highlighted his involvement in the early civil rights struggle of the late ’60s. Most claim he was Northern Ireland’s Martin Luther King Jr, explicitly committed to nonviolence and ‘passive resistance’.

John Hume was indeed one of several people who played a leadership role in the civil rights struggle at that time. So too did Bernadette Devlin, Michael Farrell, and Ivan Cooper.

After the ground-breaking 5 October 1968 march in Derry, Hume was elected vice-chair of the Derry Citizens Action Committee which elbowed aside those (mainly on the political Left) who had organised the first march.

Hume helped organise a couple of large protest demonstrations in Derry before Christmas. But, in February 1969, he was elected to the old Stormont parliament as MP for Derry City.

This effectively marked the end of John Hume’s involvement in the civil rights struggle as a nonviolent mass movement for change.

The focus for Hume and his allies became Stormont and the British government and building (successfully) the Social Democratic and Labour Party (SDLP) as an alternative to the old Nationalist party.

In fact, several of the key civil rights events which undermined the Unionist regime had no input from John Hume at all.
Hume opposed the 5 October 1968 march.

He opposed the People’s Democracy march from Belfast to Derry in January 1969 which exposed the failings of the sectarian RUC in much the same way that the 1965 march from Selma to Montgomery (led by John Lewis) did for the racist brutality of the police in the Deep South of the USA.

“It was to John Hume’s credit that despite the attacks, he remained committed to an inclusive peace process.”

Hume took no role in the anti-internment march in Derry in January 1972 which ended in Bloody Sunday.

Initially, he had, like the rest of the SDLP, supported the rent and rates strike in opposition to internment. Yet, in 1974, he returned to Stormont as a minister in a government which took punitive action against the people who were on the rent and rate strike even though internment was still in place.

It is difficult to imagine either Martin Luther King or Gandhi doing such a thing.

Hume made no contribution to our understanding of the power and dynamic of nonviolence in the way that others have. Indeed he became almost totally focused on electoral politics.

He gave it away

At the personal level Hume was a very generous man. He lived in the Bogside, in Derry, for all of his adult life. He had a modest second home near Moville in Donegal, not unusual for middle-class people from Belfast and Derry. He gave away his Nobel Peace prize money, the only one of the four to do so. He helped pay for the Bloody Sunday funerals and gave significant donations to youth clubs and suchlike in Derry.

Sadly, his last years were blighted by dementia. But by that time his political work was over and his contribution to peace made. He will be remembered by most with considerable affection.