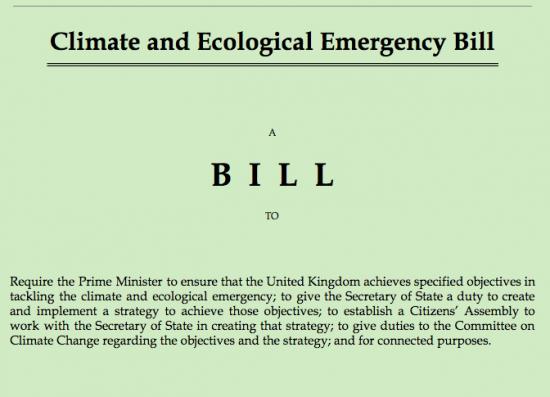 One of the main aims of XR’s September ‘Rebellion’ was ‘to create the political appetite for the Climate and Ecological Emergency Bill’ which has, so far, received the support of over 50 MPs, including DUP, Green, Labour, Lib Dem, Plaid Cymru and SNP representatives.

Introduced into the house of commons by Green MP Caroline Lucas on 2 September, this landmark legislation has been drafted by an alliance of scientists, academics, lawyers and environmentalists.

The aim is to ensure that the the UK plays a fair and proper role in limiting global temperatures to 1.5 °C.

Once passed, the bill would give the secretary of state six months to create a strategy to do these things. This strategy should ensure that ‘deprived communities’ don’t suffer as result and include ‘adequate financial support and retraining’ for people working in affected industries.

Finally, the bill would create a temporary citizens’ assembly (made up of a randomly-selected group of people, reflecting the make-up of the UK’s population) to recommend measures for inclusion in this strategy.

To find out more and to get involved, see:www.ceebill.uk