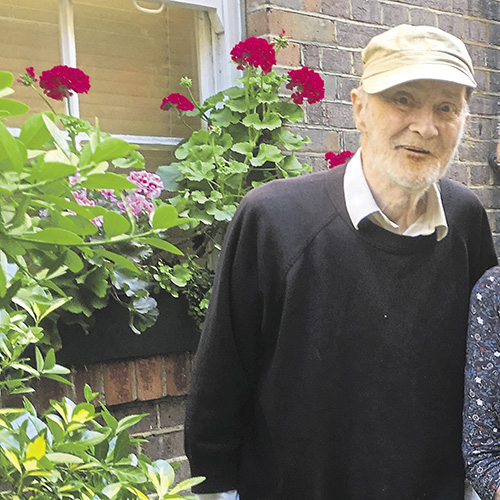 I got to know my friend and comrade Chris Roper 45 years ago when we were amongst a group of 14 pacifists and anti-militarists who spent nearly 3 months in the Old Bailey facing notorious conspiracy charges relating to the distribution of leaflets to servicepeople encouraging - and helping - them to 'down tools' [sometimes referred to as the BWNIC (British Withdrawal from Northern Ireland Campaign) trial, see here - ed]. Chris - a pacifist trouble-maker, community activist, and award-winning aeronautical engineer - has died of lung cancer aged 83.

He was an entertaining co-defendant. Facing evidence of his alleged possession of one of the offending leaflets he was outraged that that particular copy was obviously not one of his, pointing out that it 'wasn't folded properly'. Reaching into his pocket he produced another copy (of a leaflet we were all supposed to have kept clear of in the run-up to the trial on pain of losing our bail) to demonstrate the proper way to display a folded leaflet - producing apoplexy from the lawyers and laughter from the public gallery.

Born to a mother who was a teacher and a father who was a Congregational minister, he excelled in things mathematical and mechanical. At school in Reading he won a physics prize; he also built himself a canoe to commute to school across the river Thames there. Empowered by that success, while still in his mid-teens he built himself something a bit bigger, and - unannounced - paddled himself across the Channel one day; the first anyone knew was when he phoned his mother from Calais.

Facing call-up, in the final years of conscription, he ended up with the RAF, but was disqualified on health grounds before entering training. This very brief period with the forces was nevertheless sufficient for him to become an enthusiastic member of Veterans for Peace in later years.

He was briefly married during the 1960s, and in that period started working day and night on his project to design a person-powered aircraft. For a period, his craft Jupiter held the record for achieving the longest person-powered flight. Chris had to give up leading the further development of Jupiter when afflicted by mental health problems; an RAF group offered to take it over. Chris, by then a pacifist, was concerned by this, but took counsel from his uncle, Fenner (Lord) Brockway, a WW1 conscientious objector, who persuaded him that military time spent on such things was a good diversion from what else they might get up to.

After moving to Covent Garden, in central London, Chris was active in community struggles there, while continuing to work on human powered flight - including a hovercraft - and building an aircraft simulator. His peace movement activism continued in parallel, particularly with the Fellowship of Reconciliation, the Campaign Against Arms Trade, and Veterans for Peace. And just a few years ago he put me out of my misery in moments when I was failing to assemble some flat-pack furniture in my office.

He's survived by his brother Geoffrey, and his sisters, Margaret, Jenny and Patsy. His brother John (later Baron) Roper predeceased him.

In the run-up to the 2003 invasion of Iraq – and in the long and bloody occupation that followed - Chris often attended the mail-outs organised by the anti-war groups Voices in the Wilderness UK and the Pledge of Resistance. These sessions – which could involve a dozen different components and up to twenty volunteers – often lasted many hours. Chris was often one of the first to show up and the last to leave and I have fond memories of arguing with him as we folded and stapled. One memorable debate centred around which way a person’s head – or a water melon - would move if a bullet were fired through it – and why …

Before problems with his knees prevented him from doing so, Chris was a regular fixture at almost every major progressive demo in London. Notwithstanding his somewhat dishevelled appearance and nicotine-stained beard he had a genius for ‘working a crowd’ and selling copies of PN. He often ended up with scores of pounds in takings – which he always insisted on donating back to the paper.

In 2012 when a small gaggle of us travelled up to London for a demo outside the High Court about the Bexhill-Hastings Link Road, Chris (who lived just round the corner) was happy to join us. Afterwards, he invited us back to his for tea. In the photo that subsequently appeared on the front page of the Hastings Observer, he can be seen squatting next to the then-Green Party leader Natatlie Bennett, wearing a bat mask.

The comedian John Sessions tells a story about Kevin Costner turning up late on a film set only to find that the director (Clint Eastwood) had already gone head with the scene – filming a stand-in from behind. ‘Kevin, if you want to be in this picture’ Eastwood told the Dances with wolves star, ‘show up’.

Chris was a campaigner who showed up.