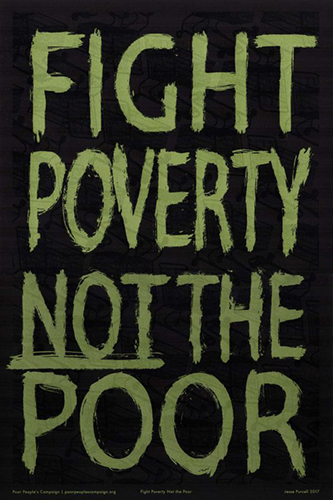 Just Seeds artists’ co-operative made posters for the US Poor People’s Campaign during teach-ins in preparation for the 40 Days of Moral Action that began on Mother’s Day, May 2018.GRAPHIC: JESSE PURCELL (CC BY-NC-ND 3.0)

Let’s support people who’re trying to change the United States for the better!

For those of us outside the US, it’s hard to know what we can do to be useful to folk in the US who’re being attacked by state forces, who’re trying to bring down an appalling president, and who’re trying to build a more just society.

The Poor People’s Campaign says it is building a ‘moral fusion movement rooted in the leadership of poor people’ to challenge the interlocking injustices of ‘systemic racism, poverty, the war economy and militarism, ecological devastation and the nation’s distorted morality’.

Why have we chosen £1,948 as our target? Because 1948 is the birth date of the national health service in the UK.

One of the goals of the Poor People’s Campaign is to ensure universal health care for all in the US, including undocumented people and native communities: ‘Everybody must have access to health care during a pandemic, without fear of the costs, incarceration, deportation or detention.’

How could this be paid for?

Apart from rolling back tax cuts for the rich, the Poor People’s Campaign demands ‘a reallocation of resources from the military budget towards our human security, including towards education, health care, jobs and green infrastructure needs.’

The coalition is organising low-income people in 16 key states to take part in presidential and senate elections in November.

Their campaign is called ‘We Must Do MORE: Mobilizing, Organizing, Registering, Educating People for a Movement that Votes’.

Please support the Poor People’s Campaign! Please make a donation to them through Peace News via post, PayPal or bank transfer.

Please use this reference ‘PoorPeoples1948’ to make clear the money is for the Poor People’s Campaign in the US.

Just Seeds artists’ co-operative made posters for the US Poor People’s Campaign during teach-ins in preparation for the 40 Days of Moral Action that began on Mother’s Day, May 2018.GRAPHIC: JESSE PURCELL (CC BY-NC-ND 3.0)