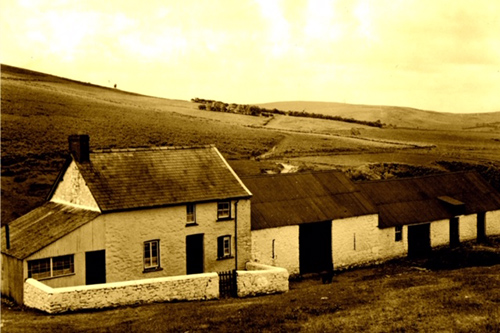 I wonder if you have seen the words ‘Cofiwch Epynt’ (‘Remember Epynt’) whilst travelling in Powys, mid Wales?

It is an echo of the ‘Cofiwch Dryweryn’ murals that have appeared in all parts of Wales over the last year – but what is behind the words?

It is a story of the heartbreak of losing land, language and a way of life to a training area for the British army.

Sixty square miles of Welsh land fell under the rule of the ministry of ‘defence’; the Welsh language border was moved 15km to the west; 54 houses were emptied; and 219 Welsh people were removed from the mountain and nearby valleys.

In September 1939, at the start of the Second World War, a captain from the war office came to Epynt and declared that all the residents would have to move out as the army wanted the land for artillery practice.

There was to be no compromise.

‘What if we have nowhere to go?’ asked one farmer.

‘Then you will be thrown out on the road,’ was the captain’s reply.

This encounter set the tone for the process. By June 1940, the area was cleared, and shooting started in July of the same year.

Shortly before it all ended, Iorwerth Peate (founder of the Welsh Folk Museum Sain Ffagan) visited the area and saw the family from Hirllwyn moving their furniture by horse and cart.

An old woman sat on a chair nearby, staring at the mountain.

Unable to hold back the tears she said: ‘It’s the end of the world here.’

The families, many of whom had lived there for centuries, were scattered, and a cultured and civilised Welsh-speaking society destroyed.

The school and chapel, Ysgol Cilieni and Capel y Babell, were no more, and some of the farms were destroyed.

The old neighbourhood, with their traditions of the Eisteddfod and Plygain, became a passing memory.

The word ‘Epynt’ is a combination of ‘ebol’ (foal) and ‘hynt’ (way or path) and means ‘a place where horses roam’.

Ironically, a horse that strayed onto the land in 1954 was shot.

The area is now known as the Sennybridge training area (SENTA).

It is a training ground for the British army, a playground for foreign armed forces, a place to train private paramilitary.

It is a place where a mock village was built so that soldiers could practice killing in the streets.

It is a place where guns are heard – described to me as ‘the noise of peace’ by the officer who led a group of us around the site during a visit to the area.

A place where the original names of the farms have been ousted by titles such as ‘Farm number 5’.

A place where the ministry of defence boast of protecting nature, yet give no value to the protection of the Welsh people and their culture.

This year marks the 80th anniversary of this shameful eviction. A national event, co-ordinated by Cymdeithas y Cymod (the Fellowship of Reconciliation in Wales) with support from Cymdeithas yr Iaith and CND Cymru, was to have been held on 19 September, but has now been cancelled due to the pandemic.

There has, however, been an online campaign to educate the public, and the names will be remembered.