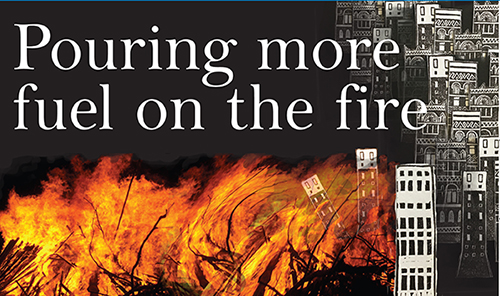 UK to resume arming war in Yemen, despite pattern of Saudi war crimes

The British government is going to sell weapons to Saudi Arabia again, after deciding there is ‘not a clear risk’ of those weapons being used to attack civilians in Yemen. Saudi-led forces have been waging war in Yemen since March 2015.

The Campaign Against Arms Trade (CAAT) responded: ‘This is a disgraceful and morally bankrupt decision. The Saudi-led bombardment of Yemen has created the world’s worst humanitarian crisis, and the government itself admits that UK-made arms have played a central role on the bombing. We will be considering this new decision with our lawyers, and will be exploring all options available to challenge it.’

According to the government, there may have been ‘isolated incidents’ of Saudi-led forces violating international humanitarian law.

However, according to the secretary of state for international trade, Liz Truss, there have not been any ‘patterns, trends or systemic weaknesses’ in terms of the Saudi-led coalition causing civilian casualties.

Rejecting this claim, Anna Stavrianakis, professor of international relations at the University of Sussex, pointed out in Middle East Eye that: ‘There is a wide range of evidence in the public domain that indicates widespread and sustained attacks on civilian targets and infrastructure.’

She pointed, as one recent example, to a report by Mwatana for Human Rights (one of the largest human rights organisations in Yemen) and Global Legal Action Network (based in Ireland and Britain). The report concluded that Saudi-led forces had ‘repeatedly violated international humanitarian law, including repeatedly conducting indiscriminate and disproportionate attacks on civilians and civilian objects’.

Mwatana documented dozens of attacks on civilian residential areas by the Saudi-led coalition, including a night-time bombing of a residential home in the Old City of Sana’a (a World Heritage site protected by UNESCO) in mid-September 2015. ‘The bomb destroyed the house and killed 13 people, including a man, his wife and their children as they ate dinner. It also caused severe damage to surrounding homes, which are also UNESCO-protected. The witnesses who spoke to Mwatana said that the man who was killed was poor and had no connection to the conflict.’

One example given is the targeting of the water project in Wadi Al Nushur, Al Safra’a in Saadah governorate: ‘the site consisted of a well, a storage tank, a solar power network, and water pumps and pipes’. The Al Nushur project provided water to 20 villages in an area suffering water scarcity. UNICEF said a coalition raid on 23 July 2018 succeeded in ‘cutting off 10,500 people from safe drinking water’.

The same project had been attacked by Saudi-led forces twice in March 2018.

The British government was forced to stop arms sales to Saudi Arabia last year because of a judicial review brought by CAAT. The court of appeal in London ruled that previous UK arms sales had been illegal because there had been no assessment beforehand of how those weapons would be used.

The court ordered the government to carry out a formal review of the way that Saudi-led forces were using those weapons in Yemen, to see if there was a pattern of criminal activity.

This is the review that concluded on 7 July with the decision to resume arms sales to Saudi Arabia. The government found that possible violations of the laws of war ‘occurred at different times, in different circumstances and for different reasons’ – and therefore were ‘isolated incidents’.

Anna Stavrianakis points out that ‘one can just as easily – in fact, much more persuasively – conclude that this is evidence of widespread and systematic attacks over a long time period.’