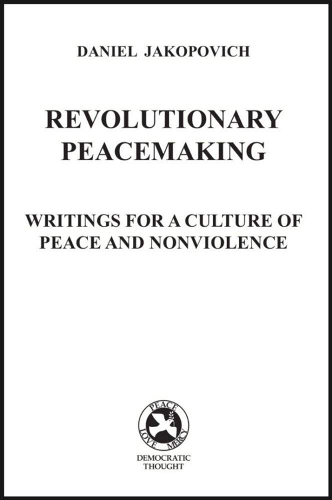 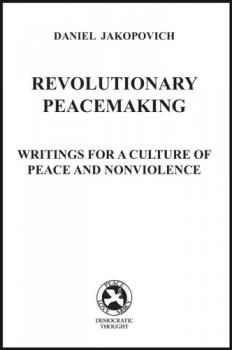 In this substantial collection of essays and poems, Daniel Jakopovich proposes a personal philosophy of peace, developed through years of education and intellectual enquiry. It is the work of a courageous writer who consistently asks the awkward questions of peacemaking and pursues them without fear.

The essential ingredients, drawn from sociology, history, and the work of peacemaking men and women, are progressively revealed, as the book explores periods of change in countries such as the former Yugoslavia, South Africa, Palestine, South Korea, and, finally, Britain.

The first section contains a series of essays on violence against children, one of which was written when the author was still at school. These examine the everyday brutality that is sanctioned and often ignored by society, such as forcing children to sit still in class and the suppression of their sexuality and friendships. Male circumcision and late-term abortion are also considered.

Jakopovich contrasts the supposed western norm of ‘child protection’ with society’s acceptance of children as collateral damage in war - and with the fact that 3.1 million children a year die from starvation, while billions of dollars are spent on arms. In later essays, he broadens this discussion, to encompass other vulnerable groups, including migrants, prisoners, convicted paedophiles, and even animals. As I understand it, this approach is intended to challenge and raise consciousness of structural violence. The question is raised as to whether it is possible to end the involvement of our countries in war so long as we continue to normalise brutality and violence against children at home.

The second strand in the book is the necessity, in peacemaking, of creating self-governing democracies - which in turn requires that people attain the necessary education, skills and habits, to participate meaningfully in such structures.

For example, the author describes how the former Yugoslavia’s revolutionary system of workers’ self government (created after the second world war) was hampered in just this fashion.

The final - and, in my opinion, best - essay, takes on the rise of the far right in Britain, with the author expanding on theories of how fascist ideologies thrive in times of scarcity and hardship, such as those currently being inflicted by our neo-liberal capitalist economy on the poorest in society. The discussion turns to the place of compassion and to veganism. Reading this on holiday, I found myself challenged by the passages on animals: if I am nonviolent how can I continue to eat eggs, fish and dairy products? The argument is encapsulated in a quote from Isaac Bashevis Singer, ‘In their behavior towards creatures, all men were Nazis.’

Most of these essays and poems were written for academic journals and are not always very accessible. However, there are excellent explanatory footnotes, and many inspirational quotes from the work of Rosa Luxemberg, John Dear, Bertrand Russell, the ancient Jain text Acharanga Sutra. The bibliography also provide a good resource for further reading.