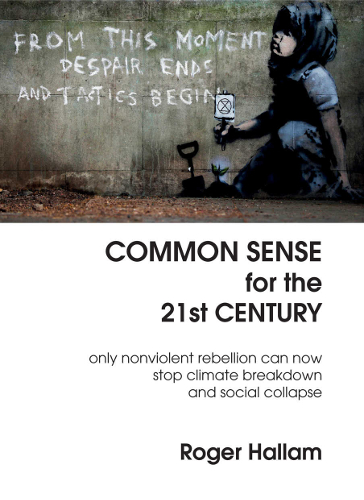 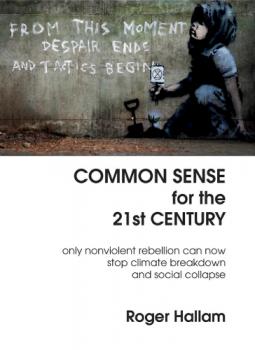 According to a recent poll, nearly two-thirds of the British public now believe that climate change is ‘the biggest issue facing mankind’ and over half say that the issue will either ‘greatly’ or ‘somewhat’ influence who they are likely to vote for in a general election – a major shift in public opinion.

Indeed, much of what XR has been doing over the past 12 months is clearly prefigured in this book, an early version of which, Hallam says, ‘formed the basis of the strategy’ for its dramatic April 2019 protests in London.

All of which leads to a seeming paradox, because – as this book clearly demonstrates – to the extent that XR has been driven by Hallam’s ideas, it appears to have been working on the basis of unfounded assertions and gross oversimplifications.

For example, one of Hallam’s core claims is that ‘climate and ecological breakdown will kill us all in the near term unless we act’ (p8) and that we are currently ‘looking at a high probability of the death of billions of people in the next generation or two’ (p56).

To back this up, he cites an impressive-sounding scientific paper, ‘Well below 2ºC: Mitigation strategies for avoiding dangerous to catastrophic climate changes’, from the the respected journal, the Proceedings of the National Academy of Sciences of the United States.

According to Hallam, this paper states ‘that at 5ºC above the pre-industrial mean temperature, we are looking at an ecological system capable of sustaining just one billion people. That means 6–7 billion people will have died within the next generation or two.’ (p16)

The problem is that the paper makes no such claim. It does say, without giving figures, that warming over 5 °C would pose ‘existential threats’ to a majority of the world’s population, but also notes that ‘there has essentially been no discussion’ of such scenarios by scientists.

There appears to be no published research supporting Hallam’s assertions.

Similarly baseless is Hallam’s contention that ‘historical records show that a regime is highly likely to collapse or [be] forced to enact major structural change’ (p9, emphasis added) if thousands of people engage in disruptive nonviolent civil disobedience in its capital city for ‘one or two weeks’.

This is what Hallam refers to as ‘the main process’ of ‘the civil resistance model’ – his proposed mechanism for ‘remov[ing] the corrupt political class’ and thereby averting climate armageddon. (pp9–10)

Hallam claims that this is ‘due to well established dynamics of nonviolent political struggle’ (p9) and repeatedly cites Why Civil Resistance Works by Erica Chenoweth and Maria Stephan (see PN 2547 – 2548).

Once again, though, anyone who takes the trouble to read the book will know that (a) it provides no support for Hallam’s claim and (b) its findings have limited direct application to the UK context given its exclusive focus on ‘antiregime, antioccupation, and secession campaigns’ (see PN 2630 – 2631).

In a recent ‘love letter to Extinction Rebellion’, Sam Knights – who was deeply involved in XR for a year, working in its media and messaging team, its political strategy team, and its rapid response team – concedes this.

Knights notes that: ‘Much of the research that originally underpinned our organising is based on revolutions and rebellions under repressive regimes and dictatorships. Whilst there certainly are some wider lessons to be learnt here, we would be foolish to think they can be easily transposed to a different political context. Our arrest strategy is deeply flawed.… But we have not been able to articulate what our new strategy is, if in fact we have one.’

So much for Hallam’s climate alarmism and his magic bullet.

Elsewhere, Hallam encourages people: to ‘stand up in cinemas, theatres, conferences, lectures, trains, supermarkets, restaurants etc. and declare that we will soon die if nothing is done and call on people to join the Rebellion’ (p52); to use direct action when speaking to the media, for example ‘insist on silence after telling the interviewer we are heading towards mass extinction and that we are all going to die unless urgent action is taken’ (p56); and muses that ‘keeping the [house of] Commons… could be necessary in order to overcome traditionalist opposition (not least from the Labour Party)’, following the handover of power to a randomly-chosen 1,000-strong national Citizens Assembly that he envisions taking place (p65).

‘“Climate justice” movements’ (Hallam’s scare quotes) are attacked for being ‘more concerned with the words and statements of the movement rather than real world successes’, for not having filled the UK’s prisons (with themselves), and for ‘do[ing] the work of the neoliberal elite they claim to be vigorously opposed to.’ (p60)

There is also an, at best ill-advised, anecdote about ‘a black woman [who] came to an Extinction Rebellion meeting and left afterwards intending not to come back because there “were too many piercings”’. This is used to illustrate a warning about ‘poorly constructed messaging ... put[ting] off new people from another identity not least because of the prejudices of the people receiving the message.’ (p58)

Nonetheless, despite the wackiness and the wild assertions, Hallam – and, to the extent that it follows his lead on these, XR – is right about some very big and important things.

We are in the midst of major environmental crises which our existing political and economic institutions have thus far proven themselves incapable of addressing.

We do need to think big and to build powerful mass movements if we’re going to force massive systemic changes. And the evidence does suggest that nonviolent strategies are our best bet in this regard.

According to Knights, the belief that ‘economic disruption is the only strategy worth pursuing... was deeply ingrained in the genesis of the movement and a strategic view that many of the original members cannot be dissuaded of.’

Yet, he claims, this is now ‘a relatively fringe position’ within XR, most of whose activists now have ‘a much more nuanced theory of change’.

As XR seeks to develop and articulate its new strategy, I hope he is right.