They came to stop a crime 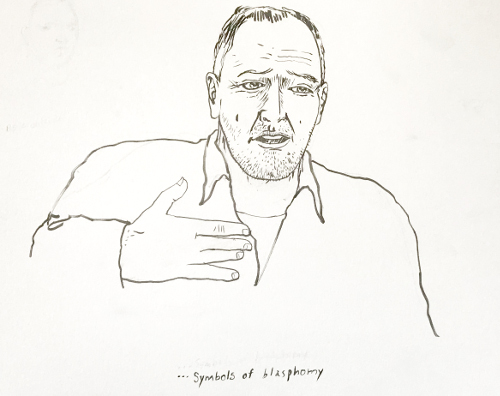 The trial of the Kings Bay Plowshares 7 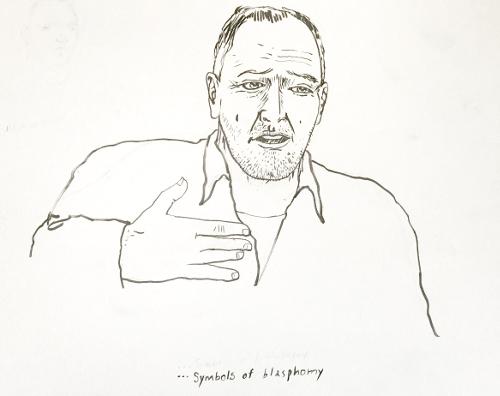 ‘You are the hope you have arrived to find.’

So ended a brief message that father Steve Kelly wrote from jail last month to be read to more than 100 friends and supporters on the eve of the trial of the Kings Bay Plowshares 7 in coastal Brunswick, Georgia, USA.

The 70-year-old Jesuit knows something about sustaining hope in hard places. This time, he’s already been in jail for over a year and a half.

He was arrested with six other Catholic nuclear abolitionists – Mark Colville, Clare Grady, Martha Hennessy, Elizabeth McAlister, Patrick O’Neill and Carmen Trotta – in the wee hours of 5 April 2018, inside the United States Naval Submarine Base Kings Bay in Georgia.

There they cut fences and used hand tools, paint and human blood to condemn nuclear weapons and carry out symbolic acts of disarmament.

The Kings Bay Plowshares joined a nearly 40-year tradition of more than 100 nonviolent direct actions where participants give form to the Biblical prophecy of Isaiah and ‘beat swords into plowshares’.

“Each submarine carries the potential to destroy life on earth as we know it.”

Five of the seven took part in earlier Plowshares actions and have spent time in federal prisons – in Steve’s case, more than 10 years.

Kings Bay is the home port for six (of 14) US Trident nuclear-powered submarines. They can each launch up to 24 Trident ballistic missiles bearing multiple nuclear warheads. Each warhead packs five to 30 times the punch of the bombs that destroyed Hiroshima and Nagasaki.

Each submarine carries the potential to destroy life on earth as we know it.

In a final memo issued just 60 hours before trial, federal judge Lisa Godbey Wood cut the heart out of the defence.

Wood wrote that there is nothing important to be learned about ‘the defendants’ subjective beliefs about religion and the immorality and illegality of nuclear weapons’, and further that ‘testimony and argument on these topics creates the danger of unfair prejudice, confusing the issues, misleading the jury, undue delay, wasting time, or needlessly presenting cumulative evidence’.

The trial began on 21 October with jury selection and opening statements.

While the Catholic faith of the defendants could not be avoided on the stand, the court rigorously enforced its prohibition on any testimony suggesting that faith gave religious, moral or legal justification for their disarmament actions.

Francis Boyle told a reporter: ‘This is a kangaroo court with a rubber stamp and a railroad all put together.’

The prosecution took the second day. The direct actions that led to the arrests were laid out for the jury in testimony and physical evidence.

Heavily featured in the government’s case were edited videos from GoPro cameras that two of the defendants wore that night. Projected on a large screen above the defendants, we watched their actions, listened to their conversations, and when the defence presented its case we heard their prayers.

Blood was already there

The defence presented their case on the third day of the trial, with the testimony of six of the seven defendants. Over repeated objections, they struggled to stay on the approved script while parrying the prosecution’s relentless, often sarcastic dismissals of their active conscience as simple criminal intent. Still, each shone in moments of testimony.

Patrick O’Neill, who’d waited until now for his opening statement, acknowledged that they’d used ‘high drama’ to make their point about first-strike nuclear weapons. ‘I draw a correlation with Jesus cleansing the Temple… like smashing the golden calf in the Hebrew Bible.’

The symbol of blood used to mark a sidewalk, insignias, and the missile shrine, he explained, ‘has clear meaning in the context of faith.… The blood of sacrifice of Jesus and the everlasting covenant. And blood symbolises what happens in war.… Kings Bay is nice and clean and you never see the blood. All we did was make it more visible. It was already there.’

Martha Hennessy, the granddaughter of Dorothy Day, who cofounded the Catholic Worker movement, spoke of how her grandmother’s early public condemnation of nuclear weapons influenced her own views.

She reflected on her Catholic belief that: ‘It is not enough to attend Mass. I also have to show I care through my works that this is what I know.’

Carmen Trotta’s passion could not be muted on the stand. He said that they went to Kings Bay, from where one-quarter of the US nuclear arsenal is deployed, to deliver a sacrament and begin the fulfilment of Isaiah’s prophecy.

‘These things are not aspirational. We have to live them into being now!’

‘I shouldn’t be preaching,’ replied Carmen with a smile.

“This is a kangaroo court with a rubber stamp and a railroad all put together.”

Of the property damage, he said: ‘We wanted you to see the outrage of God’.

Clare’s testimony began with the influence of her parents and their Catholic faith. ‘It’s not enough to just talk about Jesus. Our whole lives are about learning to understand that God is love.’

One of her purposes was to take responsibility for the weapons, and withdraw her consent in action.

She was asked to define the word omnicide. ‘It’s a word that didn’t exist before the nuclear age – the death of all living things. We had no word to describe the possibility.’

The shrine, the poison

Mark Colville spoke of his decision, at age 19, to form a life around voluntary poverty, in community, among the poor. ‘My religion says faith is a lie without action. Faith is expressed in deeds, not words.’

Government witnesses referred to a missile display, but Mark told why they called it a shrine. Like a shrine, he said, the site is arranged to provide honour and give reverence to missiles.

Why had he painted ‘idol’ and ‘blasphemy’ on them? Because they place other than God at the centre of earthly life. Idols are to be smashed.

He described their actions as more than symbolic, but also sacramental: actions which call into reality that which is not yet real.

In her testimony, Liz addressed the centrality of prayer to the group’s planning. Her attorney, Bill Quigley, opened an evidence box to hold up the banner Liz, Steve and Carmen had displayed near the bunkers. What did those words mean?

‘The nuclear weapons at Kings Bay are poison and illegal,’ she said. ‘If you understand the kill power – if they aren’t illegal, they ought to be.’

‘I need to witness against these weapons for the sake of the children and grandchildren,’ she concluded.

Father Steve Kelly, representing himself, was the only defendant who did not testify nor offer an opening or closing statement. Instead, he quietly and prayerfully listened to the proceedings.

Any suspense about the outcome of their trial was short-lived.

Each faces a maximum of up to 25 years in prison, but maximum terms are not expected.

Six defendants have been released with curfew and travel restrictions. Father Kelly is not eligible for release due to an outstanding federal case from an earlier protest at the west coast Trident base at Bangor, Washington.

After the verdict was announced and jurors dismissed, a single voice rose in the overflow courtroom, joined by a growing chorus:

Together, we embodied the hope we came there to find.

Jack Cohen-Joppa and his wife Felice Cohen-Joppa are editors and co-ordinators of the Nuclear Resister, providing comprehensive information about and support for imprisoned anti-nuclear activists since 1980. More info: www.nukeresister.org

This article was first published on 10 November on Beyond Nuclear International: beyondnuclearinternational.org. The Kings Bay Plowshares 7 are waiting to be sentenced – maybe in January: www.kingsbayplowshares7.org