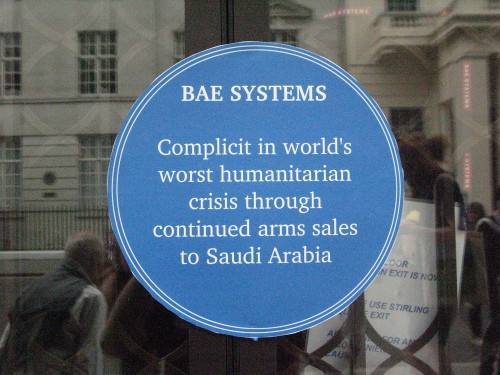 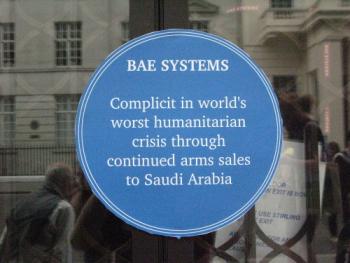 With DSEI looming large on the horizon, London Campaign Against Arms Trade took an interested group of people around some of the weapons producers that are likely to exhibit at the East London arms fair in September.

On 6 July, visits were paid to the London offices of BAE Systems, Boeing, G4S, Lockheed Martin and Rolls Royce, as well as Buckingham Palace (due to the support the royals have provided in securing arms deals).

We left blue plaques at each of the companies to recognise their horrific acts.

Attendees discovered which company made bombs that killed civilians in Yemen (Lockheed Martin); which royal participated in a sword dance that helped secure the sale of fighter jets to Saudi Arabia (prince Charles); and who said that ‘weapons sales encourage peace’ (the chair of BAE Systems).

We shone a light on these immoral companies that many people don’t realise have buildings in the centre of London.

There will be another Merchants of Death walking tour before September: www.london.caat.org.uk. Also check out the Stop the Arms Fair website for details on the protests that aim to shut DSEI down (2–13 September): www.stopthearmsfair.org.uk