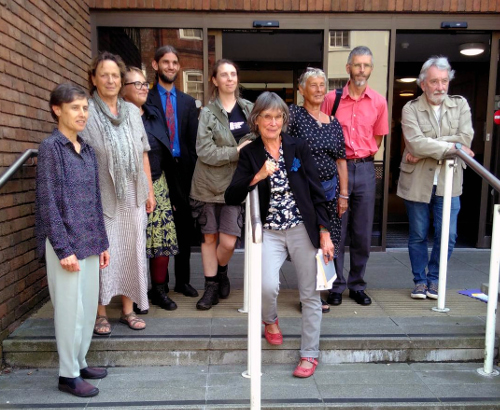 On 8-9 July, four Trident Ploughshares activists were acquitted and four were found guilty at High Wycombe magistrates' court. They were being prosecuted for an all-day blockade of the Burghfield nuclear bomb factory in Berkshire on 24 October last year. (PN 2624-2625)

Jan and Brian Jones, Jane Picksley and Marie Walsh were charged with highway obstruction for sitting in front of Pingewood Gate while locked to each other through arm tubes. District judge Sophie Toms acquitted them on the first day of trial. There was no case to answer as the crown had not established that the land in front of the Gate was part of the public highway. The Land Registry shows that it is ministry of defence (MoD) land.

The other four defendants (Chris Bluemel, Awel Jones, Cat McNeil and Julia Mercer) had parked cars at both ends of a short MoD-owned road called The Mearings, the access road to the Main Gate. The four were charged with aggravated trespass - trespassing with the intention of obstructing lawful activity.

The four argued that the activity on the site was not lawful, that the transport of warheads from Scotland to the site placed the public in danger, and that their trespass was not aggravated. Judge Toms dismissed all of these arguments and found the four guilty. She gave the defendants a conditional discharge (CD) of two years, apart from Chris Bluemel, who received a three-year CD due a previous similar conviction.

Each defendant was also ordered to pay £775 costs and a £20 victim surcharge.