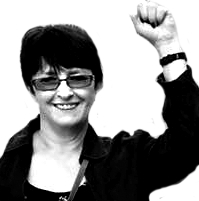 I have a friend who used to write a column for an activist-led journal. If he didn’t have much in the way of ideas for the forthcoming column, he said he’d walk around his neighbourhood until something pissed him off enough to become the basis of the column. And that the tactic worked 100 percent of the time, as there was always something going on locally worth commenting on (and he’s the sort of person who does get pissed off easily, sorry if you’re reading this, mate, you know it’s true).

So this time I am trying the same thing.

The first thing that came to mind as I ventured out to meet a fellow peacenik for lunch was ‘the air is not as fresh as it could be’.

Well, this is King’s Cross, of course. And it’s summer and the sun is shining.

Most importantly, there are loads of people who are totally unable to get about the city without their motor vehicles.

Now, yes, there are some who need a car or a van, after all, a dozen cans of paint and a stepladder would be rather inconvenient on the bus, likewise there are people whose health problems require private vehicles.

But who are all these other people blithely driving around, one car per person? Have they not heard of the congestion charge and the new ‘ULEZ’ (that’s the Ultra Low Emissions Zone)?

Do they really believe (as Thatcher once said) that a person over 30 on a bus is a failure in life? Don’t they realise it’s quicker to walk? And that the people inside a car inhale more fumes than a pedestrian or a cyclist?

You know I’ve been here before, complaining about air pollution. But what can I say, it’s kind-of important to be able to breathe, and I’ve got this cough which I’ve had for years which is definitely made worse in the inner London air.

The second thing that came to mind was... lunch, of course. On my way back to the office I picked up an Evening Standard – not something I usually do.

The picture on the front featured two bodies, of a dead child and her father, with the headline, ‘The picture that shames America’. The two were ‘migrants’ trying to get to the US to escape poverty and violence in El Salvador (or, I suppose, going to America to suck it dry, claim benefits whilst simultaneously taking good right-thinking Americans’ jobs, much like they do here in the UK. You know, the USA in which the 98 percent of the population is of immigrant ancestry).

I guess it’s a good thing that the US is being shamed for its ‘migrant crisis’ and how the Trump administration is (mis)handling it.

Not that shaming should be limited to the US of course. I’ve put quote marks around ‘migrants’ because I’m just not sure if they ought to be called migrants, given that they’re basically escaping a war zone. Violence between rival drug gangs is no less a war than that between rival paramilitary groups. Face it, there’s nothing you wouldn’t do to save the life of your child.

But should there really be insensitive photos of dead bodies on the front of a newspaper?

Would the picture have been printed if the bodies were of wealthy white Europeans?

Susan Sontag said, in 2003: ‘Perhaps the only people with the right to look at images of suffering of this extreme order are those who could do something to alleviate it… or those who could learn from it. The rest of us are voyeurs, whether or not we mean to be.’

The photo is shocking. I was shocked. I only hope the two who died, Oscar Alberto Martinez Ramirez, 25, and 23-month-old Valeria, will be remembered just as Alan Kurdi still is, by me at least, and I hope by you too.

Oh, and finally – some good news. It seems the HPV vaccine is a success, with infections of the human papilloma virus greatly reduced among young women and girls. The elimination of cervical cancer in wealthy countries such as the UK may be possible within decades, say experts. Yeah, I know, experts, who needs them?