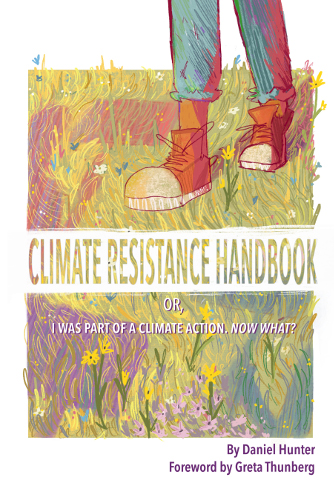 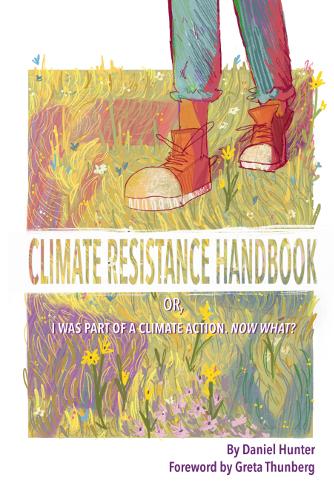 This is an edited extract from The Climate Resistance Handbook – or, I was part of a climate action. Now what? written by Daniel Hunter with a foreword by Greta Thunberg. Published by 350.org, this 68-page book is being mass distributed in the UK at cost price by Peace News.

I was eight when I won my first campaign for the environment.

It was in the church where I grew up. After service, we had social time. People drank juice or coffee or tea and ate pastries. They drank from styrofoam cups. Then threw them away.

It was wasteful. For a few weeks, I brought my own reusable glass cup. I wanted to save the environment.

But that was a personal change. Each Sunday we threw away maybe a hundred styrofoam cups. I wanted to make a bigger change. A structural change.

So I got information. I found some allies in the church. An elder showed me that we already owned glass cups. Someone informed me that it was the leaders of the church (deacons) who were in charge of this kind of decision. These people convinced me to prepare a presentation and talk before the deacons. I researched how styrofoam takes centuries to decompose and statistics on how many are thrown away a year.

One afternoon, I stood before the deacons. My knees shook. I trembled and dropped several of my notecards. I stuttered as I spoke.

I remember getting about halfway through when one of the deacons gestured for me to stop. I still remember my stomach clenching.

“The problem was that we didn’t really have a plan. We just had a tactic.”

‘You’ve convinced us,’ he said abruptly. He turned to the other deacons. ‘Can we just vote already?’

They voted yes to my proposal and moved to other agenda items.

At first, I was actually disappointed. I wanted to finish my presentation that I had worked so hard on. But that was just my fear talking. Once the shock was over, I realised: It was a victory! The church stopped using styrofoam cups and switched to glass!

What I had done was a basic campaign. The steps were all there:

I was part of a group trying to stop the US war in Iraq. We were able to organise a march of 2,000 people in my city. That’s a big turnout. And we got good press coverage.

So we did it again.

This time we got 10,000 people in the streets. I was one of the emcees for the rally and couldn’t see to the end of the march. At that time, it was the largest march I had ever been part of organising. The feeling was amazing.

So what did we do next?

We didn’t vary our tactics. We did it again. This time, we only got 1,500 people marching. And less press coverage.

Then how did we feel? Pretty bad.

And what did we do next?

Another march. Just a few hundred came this time – and virtually no press.

The problem was that we didn’t really have a plan. We just had a tactic. So we kept using the tactic because that’s what we knew.

“My knees shook. I trembled and dropped several of my notecards. I stuttered as I spoke.”

We were doing endless actions.

Government officials (and most targets) regularly just wait until people do their big action. If the activists are lucky, the official gets some bad press for a few days. But the pressure does not stay. They wait until the heat blows over. Then they keep doing the bad thing.

Campaigns vary the actions. They recruit new people to support them. They sometimes use mass actions – where lots of people are involved. And other times, they pick very risky actions that only a smaller number of people will take part in. Each step heads towards their target and winning their goal. They keep the pressure on.

With an issue like climate change – where to start? There are so many solutions needed – it’s not just one. By forcing powerful players to do the right thing, we win over new allies and gain power for our movement for bigger and bigger wins. We have to build capacity to make change as quickly as we can.

Examples of other campaigns:

Campaigns make use of tactics. They may be a mix of small and big events, repeated or one-time actions. Unlike endless actions, campaigns have a goal and a target.

It’s easy to say, ‘Save the climate.’ It’s harder to go to the ministry of education’s office and say, ‘You have to stop the Lamu coal plant, because it will kill my children.’ The focus of campaigns is practice for us, our friends and our colleagues to get used to asking for more change, faster change – and to make it a regular practice.

Whereas endless actions could have us feel good, campaigns help us feel good and make a bigger impact.

The Climate Resistance Handbook is available in the UK from Peace News for £3.50 incl p&p (please get in touch for details of bulk orders): 020 7278 3344;
promos [at] peacenews.info and http://peacenews.info/node/9461/climate-resistance-handbook-or-i-was-part-climate-action-now-what