LA Kauffman, How to Read a Protest: The Art of Organising and Resistance 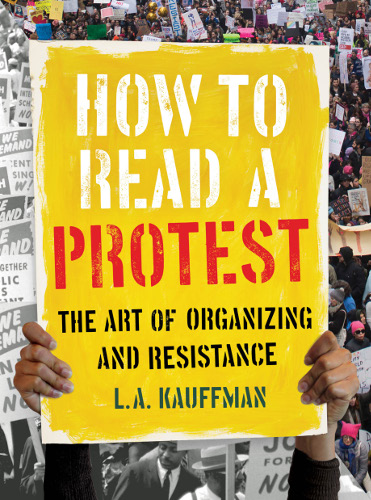 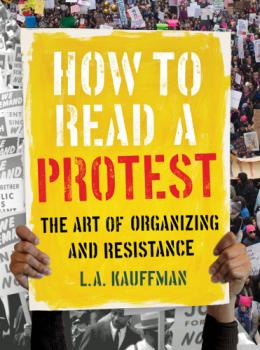 On 15 February 2003, during the the famous million-plus-strong march against the US-led invasion of Iraq, I was handed a newsheet by an anarchist. Its gist, none too tactfully expressed, was that such mass demonstrations were pointless and that we were all fools for taking part. Whether or not he was right is one of the many questions about protest explored (in a US context) by LA Kauffman in this short but insightful book.

The mobilising director of some of the largest demonstrations in US history, including massive anti-war protests in 2003 and 2004, Kauffman has considerable personal experience to draw upon. The blurb says that she uses ‘the signs that demonstrations carry as clues to how protests are organized’ (partially explaining the somewhat cryptic title), and there is some of this. But the book might more accurately have been titled ‘A Tale of Two Protests’: namely, the 1963 March on Washington for Jobs and Freedom and the January 2017 Women’s Marches that took place across the US.

The former was the first genuinely mass demonstration in the US capital, breaking new ground by bringing some 250,000 protestors to Washington. It is now best remembered for Martin Luther King Jr’s ‘I have a dream’ speech.

The contrasts between the two events are dramatic.

The 1963 march was instigated by civil rights leaders with many years of experience, while the 2017 marches ‘began with a couple of Facebook posts by two women who had never planned a protest before’.

And though they ‘carried out a great deal of the actual work of getting huge numbers of people to come to DC’, women were completely shut out of the top march leadership at the 1963 march. (Several women were allowed to sing, but not a single woman was permitted to make a speech.) By contrast, women of colour took the helm of the 2017 marches, giving them ‘an intersectional framing that had never before been front and center of any major protest in America’.

As is immediately evident from the photos reproduced in the book itself, the signs at the 1963 march ‘were completely controlled by the organisers, who took great care to make sure that the only signs that appeared at the demonstration were the ones featuring slogans they had approved’. (One campaigner – 18-year-old James Pruitt, who had spent 52 days in prison that year for taking part in a voting-rights protest in Greenwood, Mississippi – was surrounded by the march’s marshals and taken into a tent for questioning after having the temerity to bring his own sign saying ‘We must have the vote in Mississippi by 1964’. He was eventually allowed to rejoin the march with the sign.)

By contrast, at the 2017 Women’s Marches, ‘instead of one single slogan or set of approved messages, there was an exuberant array of sentiments, giving a rich sense of the priorities of the crowds.’ Indeed, ‘in city after city, so many people decided to make their own signs for the Women’s Marches that retailers had trouble keeping art supplies in stock that month.’

“One year into Trump’s presidency, there were almost 10 local resistance groups for every Women’s March that had happened in January 2017”

While passivity was built into the 1963 march, with participants mobilised ‘as bodies, not as voices’, those marching in the Women’s Marches were ‘not an audience, but the main event’.

As George Lakey notes in his latest book How We Win (see PN 2622–2623), the 1963 march was a bold (and strategically savvy) attempt to bond the labour and civil rights movements together ‘through broad agreement on a vision that showed what a more just and democratic United States would look like.’ It failed in this regard but it did set a (sometimes unhelpful) precedent for future protests.

Indeed, since 1963, at least one major (100,000+ participants) march has taken place in Washington every other year on average, and Kauffman provides tables of some of the largest, including the 1971 march against the Vietnam War (500,000 participants) and 1993’s LGBT march for Equal Rights (800,000 participants).

However, at least in the US, such mass marches are – and perhaps have always been – ‘fundamentally and emphatically unthreatening to those in power’. Indeed, Kauffman notes, ‘every single demonstration in American history with more than 100,000 participants has been, to a greater or lesser degree, sanctioned and shaped by authorities, and nearly every one has played by the established rules.’

Moreover, even the very biggest have failed to meet the size threshold that scholarship suggests guarantees success for a national campaign of civil resistance.

In their 2011 book, Why Civil Resistance Works (see PN 2547–2548), scholars Erica Chenoweth and Maria Stephan analyse data on all of the major nonviolent and violent campaigns for the overthrow of a government or for territorial liberation between 1900 and 2006. According to Chenoweth: ‘no campaigns failed once they’d achieved the active and sustained participation of just 3.5% of the population’ and every single campaign that surpassed this threshold was a nonviolent one.

Yet, Kauffman notes, in the US, this 3.5% figure is still more than double the total number of US marchers in January 2017 – and the marches themselves were only a single day’s mobilisation, not a sustained campaign.

What’s more, as Kauffman makes abundantly clear, at least in the US context, ‘mass marches... haven’t worked very well [even] as a pressure tactic’. Indeed, ‘only one march in American history can be unambiguously described as having successfully worked [in this manner], and that’s the one that didn’t happen’ – namely A Philip Randolph’s 1941 threat to bring over 100,000 African-Americans to Washington DC, which coerced US president Franklin D Roosevelt into outlawing racial discrimination in federal training programs and defence industries.

Yet, despite all these reservations and realities, Kauffman makes a nuanced and convincing case that mass protests can and do still make a difference – sometimes, a big difference: helping to shift the terms of public debate or expand the sense of what’s politically possible; motivating those on the sidelines to step up and take action; placing an item firmly on the public agenda, or introducing friction ‘where injustice depends on the illusion of harmony’. However, their effects ‘tend to be subtle, dispersed and catalytic’.

Academic research on the right-wing Tea Party movement has shown that ‘the way that a single protest event unfolds can affect the whole shape and power of a movement going forward’. But the most important question is usually ‘not how many people attend, but what they do – or don’t do – afterward.’

Attempts were made at the 1963 March to draw new people into civil rights activism, but the efforts of mobilising for the event itself actually ‘seemed to demobilise ongoing grassroots work’. (The chair of one national civil rights organisation later, somewhat hyperbolically, asserted that the March had ‘sounded the death bell of the activist movement’.)

By contrast, the ubiquity of its local events, and the self-mobilising nature of its demonstrations, meant that the Women’s Marches ‘led directly into new forms of self-organising in their wake’.

The thousands of local resistance groups that sprang up to oppose Trump and his policies ‘were typically started by women and women often constituted 70 or 80 percent of their active membership.’ And, ‘one year into the toxic presidency, there would be almost ten local resistance groups for every Women’s March that had happened in January 2017 – a total of 6,000 groups’ – vastly more than the 800 to 1,000 that the Tea Party movement had at its height.

Perhaps ironically, much of the Marches’ success stemmed from the fact that they had ‘never pretended to be about applying political pressure’.

Richly illustrated and drawing upon the latest research on social movements and their histories, this is an engrossing and thought-provoking read for anyone who’s ever felt exhilarated – or frustrated – at a mass protest.