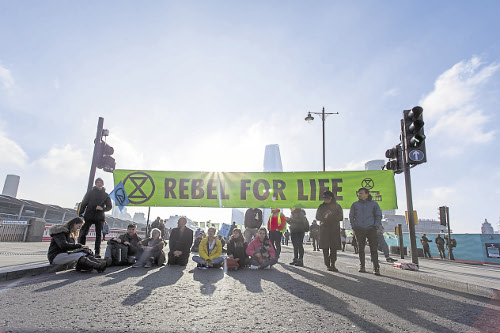 This essay was written on 1 November, before the bridges actions on 17 November that we report on p5.

If Extinction Rebellion plans to gradually build capacity for its big demands by winning smaller-scale victories then why has it launched itself with (apparently) no indication as to what these smaller-scale wins are going to be?

Lots of people seem to be very excited about Extinction Rebellion (XR)’s ‘declaration of rebellion’ and its plans to ‘bring large parts of London to a standstill [in November]’ to push its three big demands on climate change.

The issue could hardly be more important, a lot of effort appears to be going into XR, and hundreds of people are apparently fired-up and committed to engaging in civil disobedience over climate change. This is both impressive and commendable.

And yet, I have to say – as someone who has been involved in organising and taking part in acts of nonviolent direct action and civil disobedience for over 20 years – that I’m highly sceptical about this initiative.

In his latest book, How We Win, veteran activist George Lakey (who’s been involved in quite a few winning campaigns over the last five decades) writes that:

‘Some people seek to mobilize people around a general concern, like climate or war or poverty, but such mobilizations are like one-off protests – they don’t win anything. Martin Luther King, Jr., discovered this in Albany, Georgia, where the campaign goal was to “end segregation.”

‘In 1961, the Student Nonviolent Coordinating Committee (SNCC) and other groups started the direct action campaign. It was joined by Dr. King late in the year and continued well into 1962 before giving up.

“I hope I’m wrong, and that XR turns out to be more strategically-savvy than it appears to be.”

‘King’s reflection on the loss reinforces the importance of choosing goals carefully: “The mistake I made there was to protest against segregation generally rather than against a single and distinct facet of it. Our protest was so vague that we got nothing, and the people were left very depressed and in despair.”’

Lakey continues: ‘[W]e make progress on our concerns when we campaign with a clear demand. Multiple campaigns on that concern build a movement. Multiple movements can then join and become a movement of movements, opening the door to a whole new level of justice impossible previously.’

While Extinction Rebellion does have three demands, these strike me as either pretty vague (‘That the Government must tell the truth about how deadly our situation is’) or almost impossibly utopian (the government enacting ‘legally-binding policies to reduce carbon emissions in the UK to net zero by 2025’ and the creation of ‘a Citizens’ Assembly to oversee [these and other] changes’).

XR-cofounder Roger Hallam has said that: ‘We want to break new ground within campaigning and show to radical people internationally that it is possible to have an “impossible” plan and carry out a rebellion, however small or large.’

Even more importantly, there don’t yet appear to be any intermediate stepping-stone goals on the way to winning any of these demands.

One could easily get the impression from the press reports that the plan is simply to block traffic and bridges in London until XR’s three big demands are met.

Note that the problem isn’t that they want to win big. Campaigns and campaigners have won big in the past: for example, Scandinavia’s epic 20th-century campaigns to wrest significant power from the 1%, creating the ‘Nordic model’. We need to learn the lessons from these and other campaigns – both successful and unsuccessful – if we want to maximise our chances of achieving similar successes in the future.

I hope I’m wrong, and that XR turns out to be more strategically-savvy than it appears to be, as we desperately need effective campaigns that can win the big changes that need to be won on climate change.

However, if the above impressions are correct, then the XR campaign is more like a campaign to ‘end segregation’ than one to end a ‘single and distinct facet of it’.

The latter could lead to a winnable campaign (or campaigns) upon which futher victories could be built.

The former is a recipe for failure and burnout.

The Rebellion in its own words

This is an extract from an Extinction Rebellion press release from 26 October explaining the group and its intentions.

Environmental group Extinction Rebellion is coordinating a nonviolent uprising against criminal inaction by the British government on the climate emergency and ecological crisis. At 10am on 31 October, there will be a Declaration of Rebellion taking place in Parliament Square in London, with a series of nonviolent disruptive actions planned, beginning on 12 November and leading to Rebellion Day on 17 November.

Everyone is invited to attend, particularly citizens concerned about the ecological crisis and those that feel the time has come to take a stand, to be conscientious protectors of the earth. Time has almost entirely run out to address the ecological crisis which is upon us, including the sixth mass species extinction and abrupt, runaway climate breakdown. Scientists, economists and many other credible voices anticipate societal collapse and mass death as inevitable, with human extinction a real possibility, if rapid action is not taken now.

The group’s key demands are:

Gail Bradbrook of Extinction Rebellion added: ‘The time to stand up for our world, the ecosystem in which we all live, has come. Supporters of Extinction Rebellion have held almost a hundred talks and workshops all around the country so far, with the aim of mobilising people to take part in civil disobedience actions to highlight our perilous plight.

‘We understand that this may lead to arrests and possible imprisonment. We are ready for that. It is a sacrifice we make with great consideration. It is clear that we need to have the courage to put authentic and real pressure on the government to take action to solve the ecological crisis, otherwise what future do we have? Let alone our children or grandchildren. The IPCC fails us, our government fails us, the NGOs have failed us. Business as usual is no longer an option.’

Gabriel Carlyle is the co-founder of Fossil Free Hastings and the reviews editor of Peace News. In 2009, he was one of 114 activists arrested for allegedly planning to shut down a coal-fired power station at Ratcliffe-upon-Soar in Nottinghamshire.