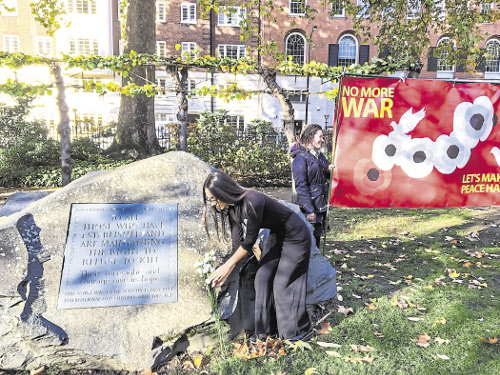 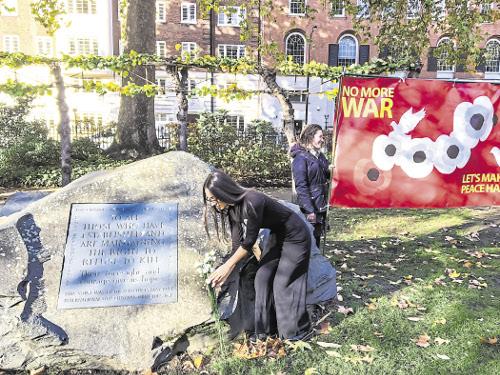 100 years after a sick and emaciated Clifford Allen, chair of the No-Conscription Fellowship, made this assessment of the conscientious objectors’ achievement, his words were repeated by actor Michael Mears, at the ‘Remembrance and Peace’ ceremony in Tavistock Square, London, on 11 November.

Over 200 people assembled to remember all victims of war, laying wreaths of white flowers, and committing themselves to the objective: ‘No More War: let’s make peace happen.’

Representing the First World War Peace Forum coalition, which organised the day, Marigold Bentley reminded the gathering that in every conflict ‘there are always people working for peace – whatever the media tells you – remember that humanity may be capable of the most terrible things but there are always people who are protesting, challenging and engaging in policy to make the world a better place. And those people are probably you.’

23 peace organisations contributed to the ‘Get Together for Peace’ event in Friends House afterwards.

The idea was to showcase the diverse approaches and campaigns which people might get involved in – from Scientists for Global Responsibility to the Servas international travellers’ network, from Woodcraft Folk (the children’s movement) to ForcesWatch, from Housmans Bookshop to Musicians for Peace and Disarmament.

A steady buzz of conversation surrounded the stalls, accompanied by sparkling music – especially the klezmer numbers – from the community band, King Toadfish and the All Weather Riders.

Meanwhile, there was standing room only for the programme of films and talks – including a showing of First World War centenary films such as Watford’s Quiet Heroes, These Dangerous Women and Women’s Peace Crusade.

This proved to be an excellent format: six short films interspersed with six five-minute talks – a taster session to attract newcomers and update old-timers.

Next door, the children’s workshop was an oasis of concentrated activity with colouring and poppy-making for the ‘Collateral Damage’ display.

Other exhibits included some of PN’s ‘The World is My Country’ posters and part of The Lost Files, Al Johnson’s sculpture about the conscientious objectors.

11 November demonstrated the positive potential of the peace movement when we converge and cooperate for a common goal.

Valerie Flessati is a member of Pax Christi UK, the Catholic movement for peace.

The First World War Peace Forum was a coalition with these members: Anglican Pacifist Fellowship, Conscience, Fellowship of Reconciliation, Movement for the Abolition of War, Network for Peace, Pax Christi, Peace News, Peace Pledge Union, Quaker Peace and Social Witness, the Right to Refuse to Kill Group, and the Women’s International League for Peace and Freedom.