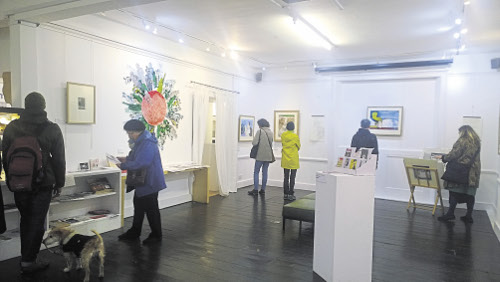 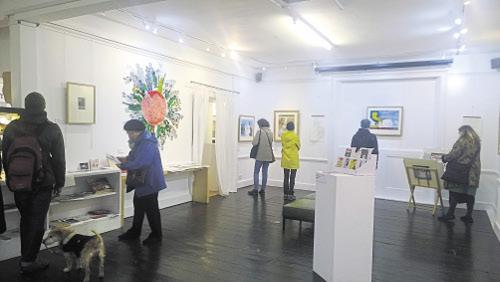 The World is My Country exhibition at Hastings Arts Forum. On the left is Wild Man, Wild Woman, Iron Water. Wild Men or Green Men slipped into the woods after the Norman Conquest and resisted.

After four years of touring, PN’s The World is My Country exhibition had its final show in Hastings from 30 October to 11 November.

Emily Johns displayed her powerful posters celebrating anti-war resistance during the First World War – and some other political and war-related work. 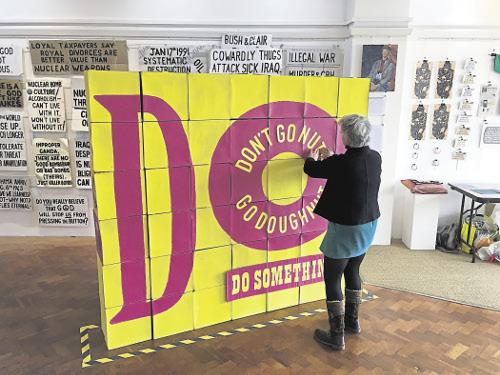 Along with fellow PN staffer Gabriel Carlyle, Emily gave a talk about the people remembered in the exhibition on 9 November, and the anti-war German revolution of 1918 (see PN 2622–2623).

On 10 November, the exhibition space was used for a day-long workshop called ‘How We Win: Exploring Nonviolent Resistance’.

Protest and Thrive, in the adjoining gallery, focused on the political use of text, with placards by Richard Crump, letterpress posters by Dennis Gould, and other work by Rachael House, Leeds Postcards, Esme Needham, Mark Pawson and Erica Smith. 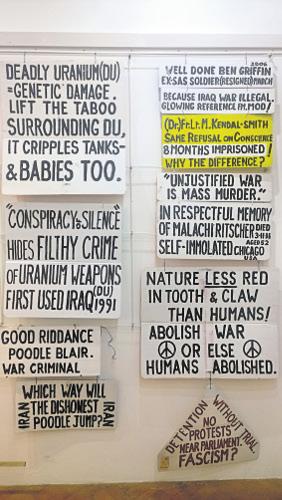 The World is My Country is a series of ten colour posters, featuring the distinctive graphic art of Emily Johns, and eight poem posters celebrating key figures and events from the First World War anti-war movement – including figures and events from Germany and the Global South – bringing their stories and chutzpah alive for a new generation. Many of the images are available as cards and posters.  The exhibition in Hastings displayed poems and songs commissioned from Alan Brownjohn, Mererid Hopwood, Dan Kennedy, Krysia Mansfield and Anna Robinson.

Praise for The World is My Country: